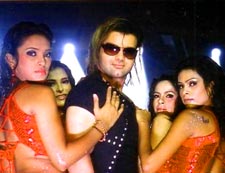 Samrat Sharma / fullhyd.com
EDITOR RATING
2.0
Performances
Script
Music/Soundtrack
Visuals
2.0
1.0
4.0
3.0
Suggestions
Can watch again
No
Good for kids
No
Good for dates
No
Wait to rent it
Yes
What is it about auto mechanics that draws Bollywood to them? Since the very beginning of the modern era in films (and I mean the modern India outlook that started in the â€˜60s), the pinnacle of honest and diligent working-class men was the auto mechanic. The blue collar man amongst blue collars, the profession that had all the virtues of a good socialist. Yeah, I have no idea why, either.

Raj Sippy may or may not, by the way, have an idea himself, but he sure as gosh darn loves his auto mechanics. Hence we have Mimoh Chakraborty regurgitating the same stereotype in his debut film, no less. To infuse the Mithunda ness and to keep the film from derailing into â€˜70s pop art, he is also a DJ by night. Yessireebob, this talented man is a superhero, meek mild-mannered socialist paragon by day, and debauched, dancing, deejaying diva by night. I say diva, mostly because cruelly enough, Mimoh, the boy who has the glorious fortune to be Mithun spawn, goes after mom. Yep, watching him serenade the actress is like watching Yogeeta Bali come back to life. However! He is the son of Mithun, and all the obvious claptrap about the old-as-time plot and looks will be drowned in the awesomeness that is Mithun's genes. Yes?

Mithun's â€˜80s era popularity was his ability to connect to his audience via his charisma, and in the â€˜90s through his glorious celebration of camp and pulp. It was a carefully managed personality and acting skills that always shone through. Jimmy doesn't have enough spunk in writing or direction to be either, and Mimoh can't act to save his life.

Yet he carries the whole film, exactly like his father would. Jimmy, as we are told, is about to die, and decides to take the blame of a murder on himself to make some money out of his misfortune. In jail he is attacked, and he realizes someone has been playing with him all along. Crime now must pay its dues to Jimmy. So begins the pulpy saga of revenge that entertains as much as it thrillsâ€¦

Or so you think. The film fails to go anywhere, much like Mimoh, who given the chance to be in a film where it could be so bad it's good, quietly simpers into content with bad. This film fails at all levels to be as vain or cult of personality as a proper junta film, and yet never displays anything worthy of salvation. I am not going to deconstruct the poor dude's entire arsenal of acting skills, neither am I going to tell you each and every misstep the film takes. Two reasons â€" harsh as the industry may be, Mimoh may yet have more in him, and it takes a stronger man to act in a Raj Sippy movie and survive it.

Secondly, the film doesn't deserve to be written about. I have spent more energy typing up this entire review than has gone into the making of this lazy excuse of a film. Poor plot, worse screenplay, absolutely flat direction and a cast absolutely not interested in acting are salient points of this project, something left languishing for two years before being resuscitated for God knows what.

Stay away, and ye shall be rewarded with better cinema. Go watch Iron Man if you haven't, or even Kantri. Watch them again if you must go venture to cinemas. Stay away from Jimmy. Consider yourself warned.
Share. Save. Connect.
Tweet
JIMMY SNAPSHOT

ADVERTISEMENT
This page was tagged for
Jimmy hindi movie
Jimmy reviews
release date
Mimoh Chakraborty, Zulfi Syed
theatres list
Follow @fullhyderabad
Follow fullhyd.com on
About Hyderabad
The Hyderabad Community
Improve fullhyd.com
More
Our Other Local Guides
Our other sites
© Copyright 1999-2009 LRR Technologies (Hyderabad), Pvt Ltd. All rights reserved. fullhyd, fullhyderabad, Welcome To The Neighbourhood are trademarks of LRR Technologies (Hyderabad) Pvt Ltd. The textual, graphic, audio and audiovisual material in this site is protected by copyright law. You may not copy, distribute, or use this material except as necessary for your personal, non-commercial use. Any trademarks are the properties of their respective owners. More on Hyderabad, India. Jobs in Hyderabad.