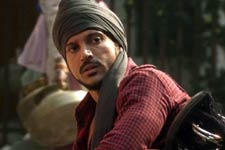 Kritika Deval / fullhyd.com
EDITOR RATING
8.0
Performances
Script
Music/Soundtrack
Visuals
8.0
6.5
7.0
8.0
Suggestions
Can watch again
Yes
Good for kids
Yes
Good for dates
No
Wait to rent it
No
Bhaag Milkha Bhaag is a big film, and not just in terms of runtime. It is a film with a big soul, big ideas, and a big heart to hold them all together. And let's not forget the larger-than-life man whose story it narrates.

As the long-overdue biopic of a sportsperson whose life is more than worth archiving, BMB is, no doubt, an underdog tale of someone who made himself from scratch by virtue of pure drive. At the same time, it offers you a minute look into the circumstances that made The Flying Sikh - including the partition of India and Pakistan, and the sociology of the times.

As it happens, one government official, along with the current coach, get to hear the tale from Milkha's mentor and former coach, Guruji (Pawan Malhotra), on a train ride to Chandigarh.

That's when it begins again, sometime during the '50s, this time with a narration of how Milkha gets his first taste of running, all for the simple pleasure of a glass of milk. And how he runs! The sight is enough to shame indolent souls like this writer for having deprived their body the exhilaration of being able to exert itself like that.

And then, it begins again during the 1940s, in a Punjabi village in what is now Pakistan. Here, you meet a young and ebullient Milkha (Japtez Singh), a normal young boy, brash, snappy, and up for mischief. He loves his sister (Divya Dutta), and wants to become a soldier.

And so it goes on, this anecdotal tale, almost as if the narrator is having a conversation with you, the viewer, answering your questions with anecdote after anecdote.

"When did he start running?"
"Actually, that happened quite by accident..."

...and so on and so forth, up until the moment Milkha Singh, the boy from Multan who was bereaved during the Partition, turns into Milkha Singh, The Flying Sikh, one of India's greatest athletes of all time.

It is an engrossing conversation which never overstays its welcome. And if it gets a bit too hero-worshippy and exhuberant in its approach, we forgive them. The man deserves his share of Bollywood drama.

And boy-o-boy, was casting Farhan Akhtar in the lead a stroke of genius. Akhtar lives and breathes Milkha. His version of the great athlete is so very, very likeable and down-to-earth, that he is all that stands between high drama and Bollywood-style cheesiness during moments when our makers get carried away with their piety for the protagonist, which happens a bit too often for good taste.

Indeed, we all saw the pictures and the trailers of Akhtar's buff new body with its rippling muscles - what we didn't know was that he somehow breathed life into them. The transformation is truly amazing. We're only exaggerating a small little when we say that there are moments when we can almost see them laughing in mirth and jumping about after a runner's high.

And then, there is the talented young find who plays Milkha Junior (Japtez Singh), who is extremely believable and clearly enjoyed every bit of it. You should see him pummel the poop out of six bigger boys and take down a man more than twice his size!

That's what strikes you the most. Be it Japtez or Farhan, the sheer joy these two very different kinds of actors infuse into their portrayal of the athlete must be seen to be believed.

As far as the rest of the cast is concerned, they do their job, which is that of a foil. While Dalip Tahil's Nehru is a tad lukewarm and awkward, Malhotra and Prakash Raj stand out in their roles as stern and honorable army men. The women in the story do take a backseat, and that is disappointing. While Divya Dutta doesn't seem to have much hope of rising from the all-suffering matron she's typecast into, Sonam Kapoor's pigeonhole as the small town girl doesn't seem to be very far off either. No doubt about it, Kapoor looks ravishing, and gives a very charming and subdued performance, but we'd have liked it if the role were meatier.

The music by Shankar-Ehsaan-Loy blends seamlessly into Prasoon Joshi's excellent screenplay, both of which play a huge part in making the biopic as engaging as it is. As far as the visuals are concerned, Mehra flair for what appeals to the eye has been apparent from his very first venture, and BMB is no different. 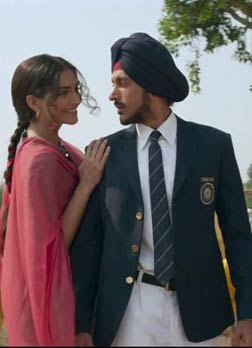 ADVERTISEMENT
This page was tagged for
bhag Milkha bhaag full movie download
Bhaag Milkha Bhaag hindi movie
Bhaag Milkha Bhaag reviews
release date
Farhan Akhtar, Sonam Kapoor
Follow @fullhyderabad
Follow fullhyd.com on
About Hyderabad
The Hyderabad Community
Improve fullhyd.com
More
Our Other Local Guides
Our other sites
© Copyright 1999-2009 LRR Technologies (Hyderabad), Pvt Ltd. All rights reserved. fullhyd, fullhyderabad, Welcome To The Neighbourhood are trademarks of LRR Technologies (Hyderabad) Pvt Ltd. The textual, graphic, audio and audiovisual material in this site is protected by copyright law. You may not copy, distribute, or use this material except as necessary for your personal, non-commercial use. Any trademarks are the properties of their respective owners. More on Hyderabad, India. Jobs in Hyderabad.