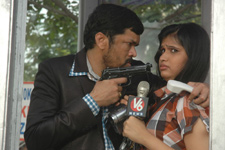 Ravi Kandala / fullhyd.com
EDITOR RATING
2.0
Performances
Script
Music/Soundtrack
Visuals
2.0
2.0
1.0
1.0
Suggestions
Can watch again
No
Good for kids
No
Good for dates
No
Wait to rent it
No
This is the weekend of sequels. On the same day that a sequel to Yamudu released, the sequel to the supposed sleeper hit Operation Duryodhana also released. Be forewarned, though - this one has no connection to the original. Neither is it directed by the same man, nor does it have the same starcast, nor does it make any pretense of taking the original story forward.

The only connection Operation Duryodhana 2 has with the first movie is that the man who directed the latter has acted in the former. And considering the fact that the man is Posani "Mental" Krishna Murali, this can't be a good thing.

Operation Duryodhana 2 is a film that tries to deliver a social message. The message is what newspapers, channels, educated citizens, uneducated citizens, the cattle of the country and the unborn children of the world have been crying themselves hoarse about - bring back the black money stashed in banks abroad, and India will immediately become a superpower.

The film's protagonist is Krishnakanth (Posani), a havala broker. The man helps political leaders stash away millions and billions in banks abroad.

His primary client is the state home minister Venkatadri (Kota Srinivasa Rao). The state's chief minister, Pratap Reddy, is an honest man with the right intentions.

One of Krishna's plans to transfer money abroad comes unhinged, and to save himself, Venkatadri implicates the chief minister. The CM contacts the CBI, and then enters a mystery man (Jagapathi Babu).

The mystery man has obviously seen the English flick Phone Booth, for he replicates the same setup, traps Krishna in a phone booth, and forces him to see the folly of his ways.

The entire first half of the film seems like a private promotional video for the chief minister that he produced himself. There were times when we were in doubt that the newsreel that is usually shown before the movie was a one-hour feature, and that the movie was yet to start. It was only the extraordinarily bad acting by veterans like Kota and Babu Mohan (oh yes, he's apparently still alive) that reminded us that this was a movie. The second half is completely inspired by Phone Booth, and is a horrid rip-off of the superb original.

Posani is his usual irritating self, while Jagapathi Babu seems unaware of where he is and what he is doing. Kota sleepwalks through the role, and is painful to watch. There is no one else worth noting.

The production values are horrible. The director seems to have shot montages of Jagapathi Babu in a flat, gotten him to dub some dialogues, and super-imposed the dubbing on random shots. His goatee, cap and spectacles keep appearing and disappearing at will.

The titles credit M M Sreelekha for music, but there is no music in the movie. The story, credited to the director and the film's unit, is also non-existent. The film, in its entirety, is an exercise in futility.
Share. Save. Connect.
Tweet
OPERATION DURYODHANA 2 SNAPSHOT 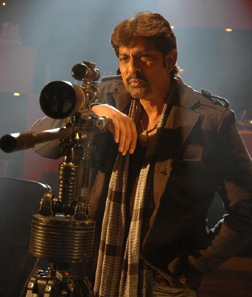 ADVERTISEMENT
This page was tagged for
Operation Duryodhana 2 telugu movie
Operation Duryodhana 2 reviews
release date
Jagapati Babu, Sonia Agarwal
theatres list
Follow @fullhyderabad
Follow fullhyd.com on
About Hyderabad
The Hyderabad Community
Improve fullhyd.com
More
Our Other Local Guides
Our other sites
© Copyright 1999-2009 LRR Technologies (Hyderabad), Pvt Ltd. All rights reserved. fullhyd, fullhyderabad, Welcome To The Neighbourhood are trademarks of LRR Technologies (Hyderabad) Pvt Ltd. The textual, graphic, audio and audiovisual material in this site is protected by copyright law. You may not copy, distribute, or use this material except as necessary for your personal, non-commercial use. Any trademarks are the properties of their respective owners. More on Hyderabad, India. Jobs in Hyderabad.