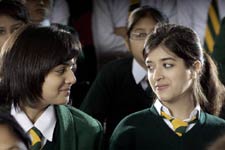 Kritika Deval / fullhyd.com
EDITOR RATING
6.5
Performances
Script
Music/Soundtrack
Visuals
7.0
6.0
5.0
7.0
Suggestions
Can watch again
No
Good for kids
No
Good for dates
Yes
Wait for OTT
Yes
There's a Chinese proverb of questionable provenance - "May you live in interesting times". And surely, no time in one's life could be as "interesting" as the teenage.

Sixteen chronicles this turbulent, and often violent, period in the life and times of four Delhi school kids. And, you really wouldn't be embarrassed of such a chronicle if it were about you.

Sixteen keeps it real. And, we mean the real kind of real, and not the cringe-worthy stuff that our directors like to pass off as reality. Our protagonists are fresh, truly interesting people, and not the annoyingly brash cardboard-dimensioned characters you usually see in this genre of movies.

Anu (Isabelle Liete), an aspiring model, comes from a well-off and very close-knit family, only to find out that there's more to things than meets the eye. Tanisha (Wamiqa Gabba), confident and very mature for her age, finds an interesting outlet for her wish to find "the perfect man". Nidhi (Mehak Manwani) is the apple of her father's eye, and has a rather frisky boyfriend. To do it, or not to do it, is the question riding on her mind.

Let's meet the guys. There's Ashwin (Highphill Mathew - no, not kidding) who is slowly but relentlessly being driven to the edge by his middle class and aspirational father.

And then, there is a writer who is Tanisha's new PG (Keith Sequeira). He likes literature, and she thinks he is a good fit for her bua, until she doesn't.

Snappy dialogue is a given in a movie of this kind, but we are very impressed by the effort taken to stay away from clichés. The girls are lovely and plenty impetuous, but very levelheaded. Also, the movie finally validates the fact that girls who party can also be teetotallers.

The only thing stopping the movie from being truly good cinema is its rather muddled narrative, and very awkward hamming on part of Keith Sequeira, who is almost always there.

A few aspects of the film are rather uncomfortable to watch, but not because they are gross, but because they touch issues we would otherwise like to ignore.

At 2-and-a-half hours, the pace is kept nice and tight, which means there'll be plenty of times where you'll end up a bit confused, but not any where you'll be bored. The camerawork is lovely, and as edgy as the rest of the film.

The music, on the other hand, doesn't quite match up. It reaches the far end of run-of-the mill, both stops at that edge. Some of the songs are just plain annoying, especially the club numbers.

While an A-rated movie called Sixteen might be an oxymoron, this is a story that needed to be told. And, honestly, if you can get them through, you probably should take your sixteen-year-olds to watch this one.
Share. Save. Connect.
Tweet
SIXTEEN SNAPSHOT 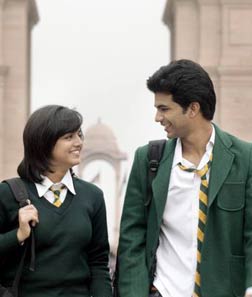 ADVERTISEMENT
This page was tagged for
Sixteen hindi movie
Sixteen reviews
release date
Izabelle Liete, Mehak Manwani
theatres list
Follow @fullhyderabad
Follow fullhyd.com on
About Hyderabad
The Hyderabad Community
Improve fullhyd.com
More
Our Other Local Guides
Our other sites
© Copyright 1999-2009 LRR Technologies (Hyderabad), Pvt Ltd. All rights reserved. fullhyd, fullhyderabad, Welcome To The Neighbourhood are trademarks of LRR Technologies (Hyderabad) Pvt Ltd. The textual, graphic, audio and audiovisual material in this site is protected by copyright law. You may not copy, distribute, or use this material except as necessary for your personal, non-commercial use. Any trademarks are the properties of their respective owners. More on Hyderabad, India. Jobs in Hyderabad.