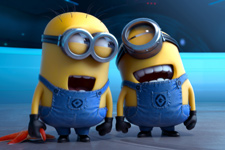 Swayamsrestha Kar / fullhyd.com
EDITOR RATING
7.0
Performances
Script
Music/Soundtrack
Visuals
7.5
7.0
7.0
8.0
Suggestions
Can watch again
Yes
Good for kids
Yes
Good for dates
Yes
Wait for OTT
No
The good people at Illumination Entertainment have gone and done the impossible. They have made grown men - the kind that strut around with their personal Amazonian rainforests flourishing on their chests, and have grown up on a staple celluloid diet that features "Bad-Ass Explosions", and "Villian-Juggling Heroes" on its menu - root for creatures that elicit responses like "cho chweet" from little, pink-crazied girls, and ahem, some women too.

For the ones who are still rubbing two stones together to make fire, or worse, are still using Orkut, we are talking about Minions. They are mutants, they go batshit-crazy over sleek, destructive weapons, and they are so mischievous that they can make a seasoned poltergeist burst into tears. The only things that distinguish them from someone like, say Magneto, is that they prance around in French Maid uniforms, and tuck little girls into their beds by singing them lullabies.

The sequel to Despicable Me has released huge, if the initial box office earnings are anything to go by, and directors Pierre Coffin and Chris Renaud have to thank the Minions for a large part of those earnings.

The story picks up from where the first movie had left it. Gru (Steve Carell) is an ex-villain who is totally into jams and jellies now, thanks to his daddy instincts that were kicked into full gear by three orphan girls whom he had adopted in the first movie - Margo (Miranda Cosgrove), Edith ( Dana Gaier), and Agnes (Elsie Fisher).

He might have been an evil moon-stealing genius before, but now, he's happy fitting himself into pink fairy-princess costumes in order to entertain sweet little (seriously, if butterflies had voices, they would sound like Agnes) Agnes on her birthday party.

But across the world, someone has stolen a secret research laboratory from the Arctic circle. Now, stealing a laboratory might not have the same oomph as stealing the moon (Gru's been there, done that), but this laboratory was important enough to attract the attention of the Anti-Villain League (AVL) and its many-chinned chief Silas Ramsbottom (Steve Coogan).

Gru, being thoroughly well-versed in the ways of the villain, is roped in to find the culprit. He is assigned a part-hysterical part-subdued borderline personality-afflicted partner called Lucy Wilde (Kirsten Wiig), and the rest of the movie is one fun ride after that.

The story does seem a little insipid compared to the first movie. Maybe we like Gru better when he's evil, when he doesn't have one compassionate bone in his body, and when his general grumpiness has not been thawed by the attentions and charms of a certain AVL agent.

The dialogues also lack that certain zing that made the previous movie such a tickler. But, some of the gags are still brilliant.

But then, it is an enjoyable experience. Even if the movie had continued with Gru being the inexperienced grumpy Papa bear to three delightfully adorable girls, it would still have been fun Courtesy - the minions.

Lucy Wilde is the manifestation of the inner, avid fanboy/fangirl (the "so in awe of action movies and heroes that I've watched Batman like, 15 times" kind) who lurks under our civilised exteriors. No wonder then, that even Gru's cuddly henchmen fall for her.

Yeah, imagine one of the minions trying to woo a lady (and for god's sake, stop that infernal squealing and gushing!). The duo goes into spy mode and infiltrates a umm... restaurant, where they have to fight a diabolical murderous umm... chicken, and Gru is utterly convinced that the mastermind behind this plot is an umm... eleven-year-old kid. And you bet you enjoy every effing minute of this madness.

Meanwhile, the said kid has been making moon-eyes at Margo, and they are, like, totally in love. Gru is furious, and Edith (the middle daughter) is suitably disgusted.

It's your typical family drama set against the backdrop of evil purple monsters (not giving out the plot on that one, even though we're dying to), freeze-guns, lipstick-tasers, and cars that turn into submarine/planes/what have you.

The animation is top-notch. Pixar may have perfected its futuristic machines in Wall-E and Monsters Inc., but Illumination Entertainment has its Despicable movies to be a suitable competitor.

Our only bone of contention is that the 3D was quite superfluous, and that the movie could have easily done without it (except for maybe the Minions footage during the credits). The soundtrack is peppy, zany and exactly as upbeat as it was in the first movie.

Coming to the actors, how does Steve Carell pull off that faux-Russian accent? And how does Russell Brand pull off a similarly accent-ridden Dr. Nefario (Gru's hearing-impaired, so-ancient-I-sang-love-ditties-to-Helen-of-Troy scientist assistant)? After the Bridesmaids, we kinda know that Kirsten Wiig can play any character.

That just leaves the Minions. Fact: They have been voiced by the movie's directors Coffin and Renaud. Fact: Their seemingly-gibberish jargon comprises French, English and Spanish words. Fact: They are so awesome that their creators have decided to make a spinoff called "Minions". Fact: You will never, EVER be that cute.

Chances are your kids will drag you to watch this movie. But, it's guaranteed (we are ready to bet our resident leprechaun on this) that you'll find lots to guffaw at. There is one particular scene which will leave you ROFL-ing shamelessly before your kids. Three words - Gru, Pelvic Thrusts. Two more words - Fart Gun. And oh, two more - Despicable Me.
Share. Save. Connect.
Tweet
DESPICABLE ME 2 SNAPSHOT 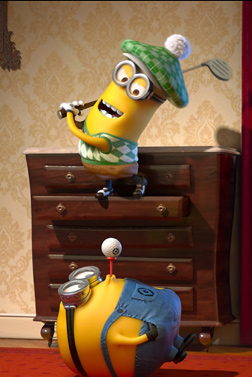 ADVERTISEMENT
This page was tagged for
Despicable Me 2 english movie
Despicable Me 2 reviews
release date
Steve Carell, Kirsten Wiig
theatres list
Follow @fullhyderabad
Follow fullhyd.com on
About Hyderabad
The Hyderabad Community
Improve fullhyd.com
More
Our Other Local Guides
Our other sites
© Copyright 1999-2009 LRR Technologies (Hyderabad), Pvt Ltd. All rights reserved. fullhyd, fullhyderabad, Welcome To The Neighbourhood are trademarks of LRR Technologies (Hyderabad) Pvt Ltd. The textual, graphic, audio and audiovisual material in this site is protected by copyright law. You may not copy, distribute, or use this material except as necessary for your personal, non-commercial use. Any trademarks are the properties of their respective owners. More on Hyderabad, India. Jobs in Hyderabad.