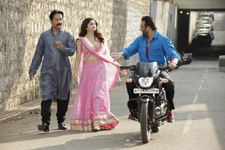 Nupur Barua / fullhyd.com
EDITOR RATING
5.0
Performances
Script
Music/Soundtrack
Visuals
5.0
4.0
5.0
6.0
Suggestions
Can watch again
No
Good for kids
No
Good for dates
No
Wait to rent it
Yes
So, Sanjay Dutt is in jail, for reasons that many agree are justified, whether he was being innocently naive or manipulatively cunning. That does not, in any way, mean that he loses fans, if the current "housefull" status of his latest film is anything to base assumptions on.

T P Aggarwal, the producer, may have originally just wanted a Dabangg-like hit on his hands, by remaking a Tamil superhit film, but even he knows now that Policegiri will be a hit, since his Robin Hood is in prison.

Which is why the movie begins with a note (visual collage, actually) of gratitude to the actor. And before you can say Sherwood, enter Robin Hood, a.k.a. DCP Rudra (Sanjay Dutt), who was "born in Mumbai, brought up in India". With dialogues like these, you get a pretty good idea of where the film is headed.

Rudra is newly transferred to the city, and is a self-admitted "combo" police officer - both a goon and a cop. He accepts bribes, for a reason of course, he beats up people and destroys public (and private) property at will, and he also loves his item girls.

There is, naturally, a bane of his life. That person is Nagori (Prakash Raj), who cannot get over Rudra's audacity. Somewhere, deep down, Nagori admires Rudra's irreverence, but since the feeling is not mutual, it gives Rudra the freedom to pursue the former relentlessly till the end, to break him down, and to give the audience a much-awaited sense of justice.

There is also a love interest in the picture, and her name is Sehar (Prachi Desai). She is the quintessential Indian lover, who does not question her beau's dubious ways, but "believes" in his reasons for doing the things he has to do - which includes beer-dipped idli as a favourite snack.

The story then, is straight out of the 1980s - there are corrupt cops, corrupt-er villains, and a system that is making life hell for the general public. For good to triumph over evil, sacrifices have to be made, and the hero has to stoop to his lowest level to become the saviour that all these hapless citizens have been waiting for all this while.

The script has traces of Amitabh Bachchan movies of the 1980s, plus the slapstick humour of recent Salman Khan movies, specifically Dabangg and Wanted. In fact, there are not-so-subtle tributes paid to Salman Khan.

As with most cop movies these days, the villain is also the comic relief. In this particular screenplay, it does not work so well, but the makers seem to convey the message that evil is never really dangerous, just a distraction (and mostly funny).

The dialogues in the movie are whistle-worthy, especially for die-hard action movie fans. There is always an audience for these cop/action flicks, and Policegiri fits into this not-so-niche genre very well.

Sanjay Dutt looks old. Older than the actors who play his would-be in-laws, at least. His stunts are slightly stilted, given that he is not so flexible any more, and you can see the strain that this movie takes on him, physically.

Prachi Desai is a prop, and Om Puri is wasted, and OTT. Prakash Raj hams a bit, and does his wide-eyed menacing act with a certain conviction, but this is not his best role as a villain.

The production and costume designs seem to be inspired by Rohit Shetty movies. SUVs and other vehicles fly at will and explode, and there is always a lot of colour in the frame, at any given point.

The songs are nothing much to write home about, although "Robin Hood" has become a catchy number. The song sequences are loud, but the background score is louder, and the flashy cinematography does not help.

Strictly for Sanjay Dutt fans, Policegiri offers nothing new in terms of music, story or look. In other news, the Dutt family went to Pune to watch a special screening of the movie. At least Sanjay Dutt has something to smile about while he stares at the blank walls in prison.
Share. Save. Connect.
Tweet
POLICEGIRI SNAPSHOT 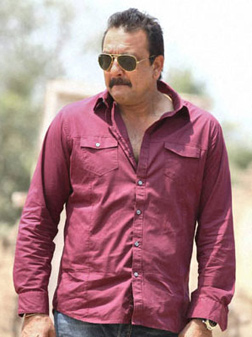 ADVERTISEMENT
This page was tagged for
Policegiri hindi movie
Policegiri reviews
release date
Sanjay Dutt, Prachi Desai
theatres list
Follow @fullhyderabad
Follow fullhyd.com on
About Hyderabad
The Hyderabad Community
Improve fullhyd.com
More
Our Other Local Guides
Our other sites
© Copyright 1999-2009 LRR Technologies (Hyderabad), Pvt Ltd. All rights reserved. fullhyd, fullhyderabad, Welcome To The Neighbourhood are trademarks of LRR Technologies (Hyderabad) Pvt Ltd. The textual, graphic, audio and audiovisual material in this site is protected by copyright law. You may not copy, distribute, or use this material except as necessary for your personal, non-commercial use. Any trademarks are the properties of their respective owners. More on Hyderabad, India. Jobs in Hyderabad.