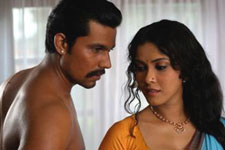 Nupur Barua / fullhyd.com
EDITOR RATING
6.0
Performances
Script
Music/Soundtrack
Visuals
6.0
4.0
5.0
7.0
Suggestions
Can watch again
Yes
Good for kids
No
Good for dates
Yes
Wait to rent it
No
Francis Picabia, French avant-garde painter and poet, once said, "A free spirit takes liberties even with liberty itself." And that is what Raja Ravi Varma, considered one of India's best painters ever, did. He followed his heart and his passion, and did not care much about morality and societal norms, thus becoming a revolutionary artist of his times. His defiance immortalised him, and Ketan Mehta's Rang Rasiya tries to figure out the man behind the legend.

The movie begins with Varma (Randeep Hooda) painting on a canvas, when he is interrupted by the authorities. This is in Mumbai, or Bombay, in the 1890s. He is arrested for profanity in his paintings, and is to be tried in court. The prosecutor (Vikram Gokhale) tells the judge (Tom Alter) and the jury that Varma is out to malign and destroy Indian culture, specifically Hindu culture, and the trial begins. Varma decides to defend himself, rather than appointing a lawyer.

As the trial proceeds, it is brought to light that Varma was patronised by the king (Aashish Vidyarthi) of his region, Kilimanoor, Kerala. So taken in was the king by his talent that he conferred upon him the title of "Raja", to elevate him to the status of royalty. Varma is married to a princess (Tripta Parashar), but he finds her household and conventions too restricting, which is why he embarks on an affair with a lowly maid Kamini (Rashaana Shah), who becomes his first muse.

After the death of the king, a dejected Varma moves to Mumbai with his younger brother Raj (Gaurav Dwivedi). There he is supported by the Diwan Madhava Rao (Sachin Khedekar). He is inspired to lift his brush again after he spots Sugandha (Nandana Sen) in a temple. He convinces her to model for him, and she becomes the muse for his paintings of goddesses, as well as his most intense love.

When the Maharaja of Baroda commissions Varma to make copies of the works of famous European painters, the latter refuses. Instead, he proposes to tour his own country, to look for stories that can be painted on a canvas. When he finally finishes his collection, he insists on making the viewing public, instead of being confined to the big hall in the palace.

Observing the reaction of the audience, Varma decides to invest in a printing press, with the help of a German print technician Fritz (Jim Boeven) and local businessman Govardhan Das (Paresh Rawal). His intention is to make copies of his art available to as many people as possible. As his popularity grows, so does the resentment of self-proclaimed keepers of faith and morals, and he is sued for what they see as obscenity. Varma's life starts spiralling downwards, as he fights for his creative right to express freely.

The first half of the movie begins interestingly enough, with flashbacks telling us how young Varma used to draw on the walls of his home, and how he loved women as a young adult. After he moves to Mumbai, however, the story begins to drag out. After a point, you are not sure what the chronology is, and the constant shuffling between incidents throw you off track. Again, although it is made clear that the younger brother is narrating the story, his voice disappears regularly and comes back when you have forgotten all about the narrative technique.

Then, Varma is suddenly old towards the end of the movie, and nobody else around him is affected by age. The narrator does not tell us how long the trial is, which is why it all seems like a matter of a few days, which it is clearly not. And given that his marriage to the princess was described in detail, it seems abrupt when the story forgets about her and their children (never mentioned) altogether.

Also, historical events and characters are added at random, without any bearing on the story. The sequence of the cinematography at Watson Hotel reveals to us that the young man who is seen in many frames with Varma is actually Dadasaheb Phalke - this revelation seems inserted for effect. The film begins and ends with an auction hall in present day Mumbai, and act as bookends to the whole story, but it is a rather dull sequence.

Finally, relationships established dramatically fizzle out later in the plot, and you are never sure where Varma is headed emotionally. His affair with his muse is rather cloying at times. Whenever the movie begins to drag, it is brought back to life with a theatrical dialogue, or scandalous scene, or a song. The nude and semi-nude bits are shot aesthetically, especially the lovemaking scene between Varma and Sugandha when they are covered in paint, but be prepared for one shocking, unexpected shot.

Ketan Mehta clearly has a message with this film - art is immortal and it is pointless to curb it. He emphasises on the fact that it was Raja Ravi Varma who gave us a visual representation of what our gods and goddesses look like, and they are worshipped in those forms (of pictures) even today. Raja Ravi Varma also gave faces to our mythological heroes and villains. This is the information you learn from this movie, and the rather convoluted, never-ending plot is just the price you pay for this otherwise priceless knowledge.

Randeep Hooda is perfect as the anguished, lovelorn, determined Raja Ravi Varma. He begins to overdo this towards the end, but is otherwise a treat to behold. The women, on the other hand, are rather painful to watch - especially Nandana Sen. Her coyness does not ring true, and her reactions are a little too melodramatic to be an honest portrayal of a woman in love. The exception is Ferena Wazeir, who is convincing as Varma's intellectual friend Frenny.

Despite the delay in the release of this film - almost six years - the production design is far better than in most recent movies that we have seen. From the carriages to the streets and the settings, all seem authentic. The Indian costumes are magnificent and apt, but the British/European clothes are rather dull, appearing almost as if they have been put together as an after-thought.

The cinematographer obviously took his job seriously, because some of the sequences are pieces of art in themselves, especially the ones set in Kerala. However, the more spacious the environment, the less impressive the lighting, which is a disappointment. The editor needed to pace the last half hour of the movie a bit more evenly, because it just drones on, and you lose track of what the real story is. The music is decent, but not very catchy.

Raja Ravi Varma definitely deserved a better movie than Rang Rasiya, but Ketan Mehta's film is has its heart in the right place. What is most important is the topicality of the main theme - that we are as intolerant now as we were then, and that is a scary thought. The famous artist made art available to the common man, because he was, like American Georgia O'Keeffe, "...for an art ... that does something other than sit on its ass in a museum." If you are interested in the history of our country, then you must watch this movie. Remember to leave the kids at home, though.
Share. Save. Connect.
Tweet
RANG RASIYA SNAPSHOT 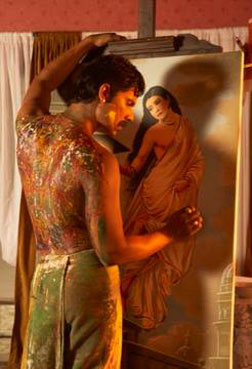 ADVERTISEMENT
This page was tagged for
rang rasiya colors of passion movie
rang movie
Rang Rasiya hindi movie
Rang Rasiya reviews
release date
Follow @fullhyderabad
Follow fullhyd.com on
About Hyderabad
The Hyderabad Community
Improve fullhyd.com
More
Our Other Local Guides
Our other sites
© Copyright 1999-2009 LRR Technologies (Hyderabad), Pvt Ltd. All rights reserved. fullhyd, fullhyderabad, Welcome To The Neighbourhood are trademarks of LRR Technologies (Hyderabad) Pvt Ltd. The textual, graphic, audio and audiovisual material in this site is protected by copyright law. You may not copy, distribute, or use this material except as necessary for your personal, non-commercial use. Any trademarks are the properties of their respective owners. More on Hyderabad, India. Jobs in Hyderabad.