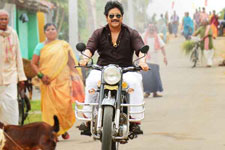 Josh / fullhyd.com
EDITOR RATING
7.0
Performances
Script
Music/Soundtrack
Visuals
7.0
7.0
7.0
8.0
Suggestions
Can watch again
Yes
Good for kids
No
Good for dates
Yes
Wait for OTT
No
This reviewer's mother would often narrate a tiny story. A mother once asked her four kids what they wanted for dinner. The eldest demanded lady fingers, the second insisted on carrots, the third was keen on drum sticks, and the youngest wouldn't look beyond potatoes. The mum smiled at this lengthy wishlist, took a handful each of these vegetables, chopped them up and dunked them into one single dish - sambar.

Good old sambar. Needs tact but not very difficult to make, superbly enjoyable, and has something for everyone. We could well be talking about the hailed concept called the Sankranthi release. That one which all in the family want to go to - young and old, male and female, the boisterous and the studious. We're talking the likes of Kalisundam Raa and Okkadu, perhaps the most enjoyed Sankranthi releases in the last 25 years. It is this kind of film Soggade Chinni Naayana aspires to be. And while not comparable to the aforementioned stalwarts, is easily the most festive film this week.

Dr. Ram Mohan (Nagarjuna) is the very diffident son of a very confident man - the late Bangarraju (Nagarjuna again), who died in an accident while his son was still in the womb. Bangarraju was quite the casanova of his time who could enter a woman's heart so easily, it was like he got free rides on Cupid's arrows. In contrast, the son can barely be a functional husband to wife Seetha (Lavanya Tripathi).

As the marriage is in shambles with Seetha seeking divorce, the mother (and Bangarraju's wife) Satya (Ramyakrishna) is pretty annoyed with her dead husband, so much that her screams at his picture on the wall reach all the way to hell itself. Yama Dharma Raja (Nagababu) who is already fed up with Bangarraju's coquettish ways (he doesn't leave hell's female sentries alone) decides to send him back to face his wife. And now Satya wants Bangarraju to fix her son's life.

As over the top as the plot is, it nicely sets up the stage to what we pay our ticket money for. The trailers promised a lot of Nagarjuna swaggering in his white dhoti and gliding on his black Bullet. And swaggering in white panche and gliding on black Bullet is exactly what we get. It is a lot of fun to watch the man play the native Telugu charmer with an ease that no one else in the industry can brag of at the moment.

Most of the elements in the mix work. The massy fights are well choreographed (not in the technical sense - we solely mean that they entertain). The comic portions are largely hilarious. Brahmanandam, Brahmaji, Jhansi and Vennela Kishore contribute well, but Nagarjuna often pulls it off on without needing that support. The visuals (cinematography by P S Vinod) revel in the colours you'd expect from a festival release, and the music (Anup Rubens) just amps up the celebrations.

The romance, too, works. And works very well. Ramyakrishna takes over the heroine mantle after so long, and makes superb use of the chemistry she shares with Nagarjuna. The current lot of heroines could take notes (although Lavanya manages a nice enough performance in her own right). Ramyakrishna gives those exact vibes of having missed her husband all those years.

With that summary list of compliments we now arrive at the niggles section. Firstly, someone has got to talk to these Tamil actors and ask them to not dub for themselves (or get an accent coach if they have to). Ramyakrishna (Ramya Krishnan, as she is known in her home state), Nasser and Sampath all dub for themselves, and while it is gratifying that they are speaking our language, it feels quite odd that people in the Godavari districts would enunciate like that. The whole notion of sandhi goes for a toss when they wield the dubbing mic. When a Telugu person says "Sivaraatranna roju" it feels normal - when a Tamilian splits the sandhi and says "Sivaraatri anna roju", it's just not the same.

But let's move on to the more important complaint. There is a tad more of philandering alluded to in Soggade Chinni Naayana than tolerable - Nagarjuna flirts and gets cosy with too many women and makes too much of a scene of it for a family film. All the navel-gazing and the naughty references can overwhelm some people. Forget the sambar analogy, all that spice brings the film far closer to a kind of rasam - sarasam. A daughter might not feel very comfortable watching the film sitting next to her dad, who is likely to be wishing he were somewhere else himself.

But like we mentioned, this is the most festive release this week, and barring those rather minor flaws you'll find lots of reasons to like Soggaade Chinni Naayana. Might as well take the risk, eh?
Share. Save. Connect.
Tweet
SOGGADE CHINNI NAYANA SNAPSHOT 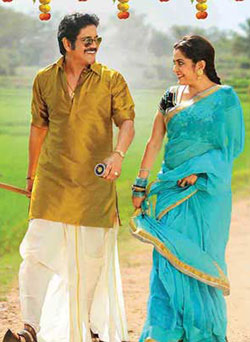 ADVERTISEMENT
This page was tagged for
sogade chininayana movie heroine name
telugu soggade chinni nayana movie
soggade chinni nayana full movie hd
soggade chinni nayana hd movie
soggade chinni nayana full movie hindi
Follow @fullhyderabad
Follow fullhyd.com on
About Hyderabad
The Hyderabad Community
Improve fullhyd.com
More
Our Other Local Guides
Our other sites
© Copyright 1999-2009 LRR Technologies (Hyderabad), Pvt Ltd. All rights reserved. fullhyd, fullhyderabad, Welcome To The Neighbourhood are trademarks of LRR Technologies (Hyderabad) Pvt Ltd. The textual, graphic, audio and audiovisual material in this site is protected by copyright law. You may not copy, distribute, or use this material except as necessary for your personal, non-commercial use. Any trademarks are the properties of their respective owners. More on Hyderabad, India. Jobs in Hyderabad.