Aamir and his pointy ears dominate proceedings completely in Dhoom 3, and you will definitely not complain that everyone else is side-tracked. We mention the pointy ears because we don't remember them being so pointy earlier. So much so that we started searching for other mutants to appear on screen. They didn't, but Aamir continued to look more and more like one.

Dhoom 3 has a fairly engaging script, one that could have evolved into a blockbuster but is pulled down by the weight of its own franchise. More about that once we get the script nailed down.

Dhoom 3 is about Sahir (Aamir "pointy ears" Khan), the owner of the Great Indian Circus in Chicago. Sahir has a grouse against the Western Bank of Chicago, which forced Sahir's dad Iqbal (Jackie Shroff) to take his own life rather than see the circus fall into the hands of the bank. Sahir vows that he will bring the bank down and restore the circus to its earlier glory.

This he plans to do by looting all branches of the bank and making a mockery of it in the eyes of its shareholders. After the first two robberies, Indian supercop Jai Dixit (Abhishek Bachchan) and inseparable appendage Ali (Uday Chopra) are called to Chicago to assist in the investigation - the reason being that the thief leaves messages in Hindi whenever he robs (like a translator wouldn't have been enough). The remaining movie is the usual cat and mouse between cop and thief.

Now, the first half of the first half of all Dhoom movies is similar - to be precise, exactly the same. Villain entry shot, villain entry song on the Dhoom tune with some spectacular dance moves and rolling titles, hero introduction shot with some mandatory attempts at comedy by Uday Chopra and scowling and bashing by Abhishek Bachchan, and heroine entry song with overwhelming choreography and little or non-existent costumes.

Dhoom 3 follows this religiously - the additions being a flashback for the motive, and some non-spectacular tap dancing by Aamir Khan during the rolling titles. We were mostly bored during these initial portions, the only bright part being Katrina Kaif's "Kamli" number that took our breath away.

Once the template is done away with is when the fun begins in Dhoom 3. The second half shows surprising enterprise from the scriptwriters in terms of actually putting in twists and turns.

Aamir Khan is in his element, and plays Sahir beautifully. The anger, the vulnerability, the romance - everything is portrayed beautifully, and his six-pack body with those pointy ears (there we go again - no more mentions, we promise) is a delight.

Katrina Kaif gets three songs and two scenes, and not much to do. However, she is breathtaking in the circus sequences, and provides several jaw-dropping moments.

Abhishek Bachchan and Uday Chopra continue their Jay-and-Ali act, and actually show us that star kids do not have it easy. Their limited talent also results in their roles being limited. The little chemistry they showed in parts 1 and 2 is non-existent in this one. And we will cut them some slack - they are given so little to work with.

Vijay Krishna Acharya mounts the movie on an absolutely lavish scale, and takes everything to the next level. The songs are beautifully shot, the circus is picturised wonderfully well, and there is actually an effort at script.

The choreography makes the songs sound better on screen. The "Malang" song, supposedly India's most expensive song ever, is truly awesome.

Dhoom 3 is the desi-version of Hollywood's holiday movies - unapologetic masala with some sentiment, action and chases, a beautiful heroine, and a couple of good numbers. If this is not your definition of a good movie, we'd still urge you to give in to the holiday season and give Dhoom a shot.
Share. Save. Connect.
Tweet
DHOOM 3 (TELUGU) SNAPSHOT 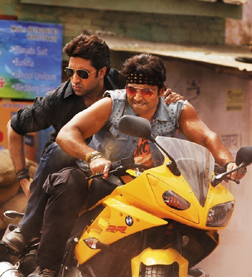 ADVERTISEMENT
This page was tagged for
dhoom 3 Telugufull movieTelugu links download
Dhoom 2 Full Movie Download
telugu movies wood dhoom 3
Dhoom 3 Telugu Movie 9xrockers
telugu wood doom 3 movies downloding
Follow @fullhyderabad
Follow fullhyd.com on
About Hyderabad
The Hyderabad Community
Improve fullhyd.com
More
Our Other Local Guides
Our other sites
© Copyright 1999-2009 LRR Technologies (Hyderabad), Pvt Ltd. All rights reserved. fullhyd, fullhyderabad, Welcome To The Neighbourhood are trademarks of LRR Technologies (Hyderabad) Pvt Ltd. The textual, graphic, audio and audiovisual material in this site is protected by copyright law. You may not copy, distribute, or use this material except as necessary for your personal, non-commercial use. Any trademarks are the properties of their respective owners. More on Hyderabad, India. Jobs in Hyderabad.