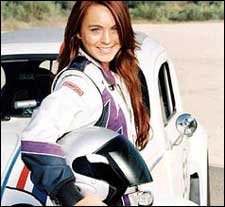 Ghazala Rizvi / fullhyd.com
EDITOR RATING
5.0
Performances
Script
Music/Soundtrack
Visuals
NA
NA
NA
NA
Suggestions
Can watch again
NA
Good for kids
NA
Good for dates
NA
Wait for OTT
NA
Herbie - Fully Loaded is to movies what Mickey Mouse is to cartoons in an age when the kids have graduated to Pokemon and Tomb Raider. Unfortunate as it is, Herbie, even when fully loaded, cannot take on the likes of Batman, Spiderman and Shrek.

Herbie is the story of a Volkswagon Beetle, who is famed for having a spirit and lifestyle of its own.The car reflects character to such an extent that it is no longer pronounced as a non-generic it, but a dignified 'he'.

Herbie - Fully Loaded starts with Herbie falling down from the fame of his prequels, and making an ungracious landing at Crazy Dave's junkyard. When Maggie (Lindsay Lohan) chances upon the car burial site to dig a graduation present for herself, Herbie, with punctured tyres and sheer will power, manages to adopt Maggie as his new caretaker.

Maggie and Herbie don't instantly gel; in fact, Maggie is carjacked, and carried into a street-race by the track-savvy Herbie. She wins the chase, but also the spite of Trip Murphy (Matt Damon), the popular racing champ propelled by lean machines and big money, who vows to debug the racetrack of the Beetle.

With a family history of speed-busters running in her blood (three generations committed to the cause of tracks), Maggie is addicted to winning. Although there is no similar history of psychological complexes and projections, Maggie doesn't find it weird that she can emotionally relate to a car.

Bathed and made-over, Herbie is all set for the big NASCAR win. Unknowingly to Maggie and Herbie, Trip and his greenbills work overtime to drill a hole through the duo's morale. But Kevin (Justin Long), Maggie's friend and Herbie's doc, has his own plans of keeping the VW on the winning lines.

Naughty, opinionated and endearingly sensitive, Herbie has certainly added character since he was last seen in Herbie Goes Bananas. Lindsay Lohan looks refreshingly fresh and complements Herbie. Michael Keaton aptly displays the silent grit of a coach burdened with raising teenage kids on his own. A character far removed from his complex and indrawn Jonathan Rivers in the White Noise, Ray is a man in control.

Despite dealing in speed and machines, Herbie - Fully Loaded fails to gear up that gush of adrenaline. It is about a cute little car which has the temerity of a knight and yet fails to churn up chuckles. It is watchable because it is a classic. The latest among the Herbie movies, a genre that started in 1969, it is comparable to, and even better than, the previous flicks. Though scattered in time and often falling off-the-mark, the previous 4 movies spawned a culture where the fans collected Herbie toys and exchanged info over the web.

Herbie - Fully Loaded is steeped in an aura of the good old times, but without enough animation to whip up nostalgia. Herbie fans will stubbornly refuse to be disappointed, as fans have a way of getting stuck over things they once enjoyed. But for an outsider, a person out on an evening for a few laughs, the movie will not deliver. You have to be very young and very innocent, to really go over the seat with suspense or excitement over this one.
Share. Save. Connect.
Tweet
HERBIE - FULLY LOADED SNAPSHOT

ADVERTISEMENT
This page was tagged for
Herbie - Fully Loaded english movie
Herbie - Fully Loaded reviews
release date
Lindsay Lohan, Michael Keaton
theatres list
Follow @fullhyderabad
Follow fullhyd.com on
About Hyderabad
The Hyderabad Community
Improve fullhyd.com
More
Our Other Local Guides
Our other sites
© Copyright 1999-2009 LRR Technologies (Hyderabad), Pvt Ltd. All rights reserved. fullhyd, fullhyderabad, Welcome To The Neighbourhood are trademarks of LRR Technologies (Hyderabad) Pvt Ltd. The textual, graphic, audio and audiovisual material in this site is protected by copyright law. You may not copy, distribute, or use this material except as necessary for your personal, non-commercial use. Any trademarks are the properties of their respective owners. More on Hyderabad, India. Jobs in Hyderabad.