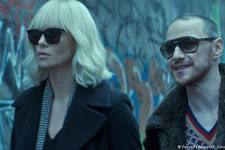 T J Reddy / fullhyd.com
EDITOR RATING
5.0
Performances
Script
Music/Soundtrack
Visuals
8.0
4.0
7.0
8.0
Suggestions
Can watch again
No
Good for kids
No
Good for dates
Yes
Wait for OTT
Yes
So, you're telling me that Furiosa is coming off that dumpster fire F-word 8 by featuring in an out and out action movie co-starring that guy who has 23 personalities and directed by one of the minds behind John Wick?

Alright, makers of this film - I'll play ball, but with two conditions: 1. Shut up and take my money, and 2. Don't make me regret giving you my money.

And here we go.

Atomic Bond - oh, forgive me, Atomic Blonde - follows the story of supposed MI-6 agent Lorraine Broughton (Theron) as she kicks names and takes ass while traversing Cold War-ravaged Berlin and its wall in an attempt to retrieve the film's McGuffin (a list which has the identities of many a spy) with the aid of a loose cannon British agent, David Percival (McAvoy).

With this plot line, the film quite obviously does not reinvent the wheel - instead, it takes a time-tested wheel and tries to drive away with it while trying to look chic. The first bit of information I'd like to give the movie-going masses is that this film is not the female version of John Wick (Jane Wick if you will) even if the trailers are cut with a deliberate intent of generating false expectations. What this film actually is, is a Cold War spy thriller with a sprinkling of some admittedly badass action.

When one hires David Leitch to direct a film, one can be sure of a few things. Firstly, he gets his crew of stunt trainers, choreographers and performers known for creating spell-binding stuff. Secondly, he can direct pulse-pounding action while creating an unflappable mood and tone via his visual style and choice of music. And finally, his films need a clear and concise plot to be effective. What he does not need is the poor man's Tinker Tailor Soldier Spy. While I would like to applaud the director for expanding his horizons by making a convoluted spy thriller, his glaring limitations as a filmmaker are jarringly evident.

His forté is action, and the centrepiece of the film is the one scene set in a hallway which dictates how Broughton comes into possession of a few nasty bruises and an unmistakeable black eye. This combined with a few other action sequences are breathtakingly well-crafted and engaging owing to long unbroken shots, clever camerawork and stunt choreography, and a high level of dedication to the craft shown by star Charlize Theron. Sadly, these action sequences act only as a garnish to a mulch-y spy film that lacks coherence, originality, a purpose or memorable characters. The movie quickly finds itself with no vigour to perform as its energy is constantly sapped by an uninspired and uninteresting plot.

While the film collapses under the weight of its ambition, the actors in it are hell bent on bullying it into not being a colossal waste of time for their audience. James McAvoy, almost nonchalantly, carries on with his Midas touch as he infuses every role with his very unique charm. But he is not what most of us bought the tickets for. We went in to watch Furiosa herself - Charlize Theron live up to her lofty standards by leading the line as the main character. Theron and her performance are however more interesting than unequivocally good.

A thinly written female character dropped in a pseudo-exploitation film is shoddily concealed with a barrage of action sequences and cold stares. I am a firm believer of the "show don't tell" rule and am aggressively against needless exposition, but Broughton as a character has nothing on offer that you can relate to, and neither does Percival. These are notoriously one-note characters spouting high-school textbook levels of social commentary and discount Tarantino line readings. Also, someone needs to help me place her distracting accent. Also also, Sofia Boutella, John Goodman and Toby Jones are a part of the film, too. Sorry if that felt tacked on - their roles and characters feel that exact way during the film's run.

The film ably distracts you from dwelling on these flaws for too long by using multiple renditions of 99 Luftballons (and a few other songs which feature heavily on my workout playlist) and its previously mentioned stylistic choices. With some crisp touches in production design, costumes and sets, and sexual freedoms afforded to its female lead that a male action star would not be in a thousand years, the movie gives you an impression that it would rather go down in flames than be a forgettable experience.

On the contrary, the film is exactly what it tries not to be. I can think of one film that left me with a similar feeling as this one did - the 2012 Brad Pitt-starrer Killing Them Softly. An overly convoluted and aggressively confusing plot, a likable lead, images of social unrest playing on the many TVs littered around the film, a soliloquy about our current state of affairs telling us that we supposedly act as pawns in a larger game played by shady men in dark rooms and so on should make for good if not great cinema. But what we are often left with are underwritten dramas whose poor work on the page is being compensated for by a talented director and his crew.

I admire Furiosa with a near God-like reverence (Mad Max: Fury Road is one of my few 11/10 films), and Lorraine Broughton like Furiosa before her will most possibly spawn a franchise of her own, but I can say without a shadow of a doubt that she will end up being a flat character unless she offers a line the audience can tag on to.
Share. Save. Connect.
Tweet
ATOMIC BLONDE SNAPSHOT 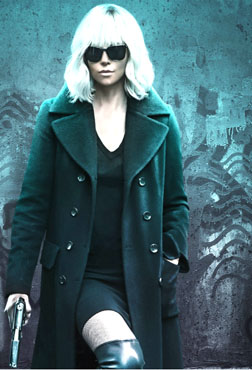 ADVERTISEMENT
This page was tagged for
the atomic blonde (english) dual audio
Atomic Blonde english movie
Atomic Blonde reviews
release date
Charlize Theron, James McAvoy
Follow @fullhyderabad
Follow fullhyd.com on
About Hyderabad
The Hyderabad Community
Improve fullhyd.com
More
Our Other Local Guides
Our other sites
© Copyright 1999-2009 LRR Technologies (Hyderabad), Pvt Ltd. All rights reserved. fullhyd, fullhyderabad, Welcome To The Neighbourhood are trademarks of LRR Technologies (Hyderabad) Pvt Ltd. The textual, graphic, audio and audiovisual material in this site is protected by copyright law. You may not copy, distribute, or use this material except as necessary for your personal, non-commercial use. Any trademarks are the properties of their respective owners. More on Hyderabad, India. Jobs in Hyderabad.