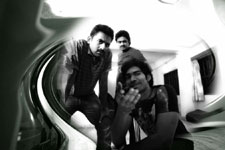 Kritika Deval / fullhyd.com
EDITOR RATING
5.0
Performances
Script
Music/Soundtrack
Visuals
5.0
4.0
6.0
6.0
Suggestions
Can watch again
No
Good for kids
No
Good for dates
No
Wait for OTT
Yes
The Telugu film industry is slowly but surely making way for a new genre of cinema. Small of budget and brave of spirit, in the recent times, this genre has given us diamonds of the first water, like Midhunam and Routine Love Story. If horror stories (not intentionally, believe you us) like Bus Stop and Mythri also get through, well, experimentation is all about trials and errors.

Case No. 666 is a rather uncomfortable kind of mediocre. The mediocrity comes not from the insipidity of content, but from the way the idea of found footage is dealt with. The squirm factor of found footage always lies in the mystery, a lot of which is built off-screen, in the sounds you hear, in whatever gets your imagination going, in everything you can't see.

Take, for instance, The Blair Witch Project, of which this movie is a near-direct rip off, missing friends and bloody hand prints included. After you're already scared shitless, the credits roll to a pitch black screen and screams. When you go to bed, that's what keeps you from turning the lights out all the way. It's the same with the gimmicky-but-spooky Paranormal Acivity.

As we mentioned above, Case 666 is a near direct rip-off of The Blair Witch Project. Only, this one is seedier (yes, that is possible when you have protagonists who go into a deserted forest lodge to make blue films). The first half is obviously relegated to what can only laughably be called "character development".

The story of three men who went missing mysteriously in the jungles of Narasapur - camera-crazy Durga, chilled-out and slightly sleazy Chaitanya, and Bhaskar, who is just there - is revealed via broken footage and outrageous contrivances to get the camera where the director wants it.

Meanwhile, another story is shown of an "investigative" reporter "investigating" their case, Case No. 666, six months after they disappear, the point of which is obviously to tell us how the footage was found.

Anyway, Durga, Chaitanya and Bhaskar, egged on by a ridiculously-accented Eshwar, go to a "haunted" lodge in the Narasapur forest, picking up a stranger en route. Their aim: make what they call BFs ("blue films" for the understandably clueless) with the village belles of Narasapur.

After a hour that seems like an eternity of absolutely nothing but bad misogynistic jokes, Bhaskar goes missing, and you're thinking - finally! Post the interval is when the film picks up, mostly due to the camera work. The acting is uniformly execrable, until just before a climax that renders the whole film pointless.

The sound could have been used much more cleverly. The visuals - if the aim of the makers was to make them look amateurish - succeeded.

The only reason to watch this one would be some 20 minutes right before the climax. This is where the thrills and the chills lie, mostly due to the clever use of absolute darkness to build fear. And that can be seen as easily within the four walls of your home as at the movie hall, if not better.
Share. Save. Connect.
Tweet
CASE NO. 666/2013 SNAPSHOT 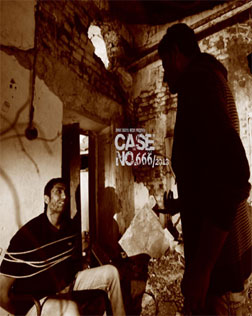 See Case No. 666/2013 full details
CASE NO. 666/2013 USER REVIEWS
1 - 2 OF 2 COMMENTS
POSITIVE  |  NEGATIVE |  NEWEST  |  OLDEST  |  MOST HELPFUL  |  LEAST HELPFUL
Vishnu Vardhan on 4th Feb 2013, 10:16am | Permalink
Hi,
Considering that the film was made in 7.5 lakhs and it was written, shot and released within one month, this film is a path breaking film for the Telugu film industry. Also, except for very few things, there is really nothing in comparison with BWP. I am happy that these film makers at least acknowledged their references in the end credits. Kudos to Case 666 team
Guru on 2nd Feb 2013, 9:45am | Permalink
HI Thanks for the review , There is no gautham character in the cinma, i think you wanted to write about BHaskar :)
fullhyd.com on 2nd Feb 2013, 10:08am | Permalink
Hello Guru,

ADVERTISEMENT
This page was tagged for
ashwini bejanki
Case No. 666/2013 telugu movie
Case No. 666/2013 reviews
release date
Aditya Agarwal, Ashwini Bejanki
Follow @fullhyderabad
Follow fullhyd.com on
About Hyderabad
The Hyderabad Community
Improve fullhyd.com
More
Our Other Local Guides
Our other sites
© Copyright 1999-2009 LRR Technologies (Hyderabad), Pvt Ltd. All rights reserved. fullhyd, fullhyderabad, Welcome To The Neighbourhood are trademarks of LRR Technologies (Hyderabad) Pvt Ltd. The textual, graphic, audio and audiovisual material in this site is protected by copyright law. You may not copy, distribute, or use this material except as necessary for your personal, non-commercial use. Any trademarks are the properties of their respective owners. More on Hyderabad, India. Jobs in Hyderabad.