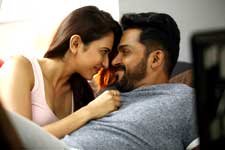 T J Reddy / fullhyd.com
EDITOR RATING
3.0
Performances
Script
Music/Soundtrack
Visuals
3.0
1.0
2.0
5.0
Suggestions
Can watch again
No
Good for kids
Yes
Good for dates
No
Wait to rent it
Yes
After winding up with Dev, the first word to come out of my mouth was a rendition of Allu Arjun's "Devuda" from Race Gurram. "Dev"uda - get it? Ha! Ha! Ha!

One more. Dev's friends convince the adventure-seeking title character that falling in love is an adventure unto itself. Do you know what the real daring adventure is? Sitting through this movie. Ha! Ha! Ha!

Many more attempts at "comedy" like the jokes above are what Dev has on offer as it gainfully tries to distract you from its slow-as-molasses pace, its spectacularly unambitious plot and its misguided commentary on the state of affairs of modern romance.

The story of Dev, the movie, follows the life and times of Dev (Karthi), the protagonist, as he stalks, woos and ultimately convinces Meghana (Rakul Preet Singh) to fall in love with him. Their relationship experiences some rocky phases as both characters have their own views of the world, and goals they intend to achieve. Will they grow as people and learn to look past themselves? Will their love prevail where so many others' have failed? Will you as a viewer to care about it by the time the end credits roll? In our case, one of the answers to these questions was not like those for the other two.

While pretty people falling in love with each other at pretty locations is always a win in the wish-fulfilment category, a good movie-going experience requires an audience to connect with said pretty people on at least a superficial level (if not a deeply emotional one). The central characters of this movie, Dev and Meghana, are so removed from reality that forming a bond with them seems impossible.

For example, our adventure seeker Dev seeks adventure because he believes that working a 9-to-5 job for years and retiring at the end of it with a house and a family seems worthless to him. Cool philosophy, brah! But we want to see you spouting out the same outlook on the world around you when your richer-than-Bezos father stops fuelling your "passions" with an endless stream of money.

Now that the film's protagonist is shown to come from a family of means, the movie attempts to coax out empathy from its audience by showing us that Dev's mother passed away at childbirth. This cynical shoehorning of "mother sentiment" is akin to the cynical shoehorning of Meghana's hatred of men as her primary character trait.

A businesswoman par excellence, Meghana Padmavati hates men as she is a child of divorce. But tough luck to you if you expect the movie to explore her dislike of humans with the XY chromosome in any meaningful way. She hates men because she saw her parents fighting when she was a kid, and she hasn't dated or even thought of dating a man in her 25 years of existence. She is okay with dating Dev, however, because he is extremely proficient in the art of stalking (her words, not ours). And their relationship goes through rough patches because he isn't available to spend time with her in every waking moment of every day.

This story about a virginal girl who is good at studies, great at work, and doesn't look at other men, falling in love with a virginal boy who has never even thought about being with a girl or holding a job before, is a teenager's definition of a cordial courtship routine and a healthy relationship, and arriving at this point in the story takes 2 hours and 10 minutes of screen time. Oh my God, we just remembered slapping ourselves silly in a barely successful attempt to keep ourselves awake while subjecting ourselves to this drivel.

Dev could have worked if it was written and executed as a rich character study about how two deeply broken individuals find their humanity as they see the missing pieces of themselves in each other. But this film is no Tamasha, or even Arya 2 for that matter. It refuses to have our heroes accept their flaws, and worse, glorifies their childish behaviour at every turn. With such poor writing backing their performances, Karthi and Rakul Preet Singh lose the minimal chemistry they shared in Khakee through the runtime of their newest venture. It is mesmerising to watch an on-screen couple lose any semblance of harmony, in real time, as the movie tries to convince itself that they deserve to be together.

The movie does this by sticking them together in song after song, filmed in exotic foreign locales which are filled to the brim to white folk dancing themselves silly. Isn't this genre of music supposed to be a part of pointlessly loud action movies? No? It is ubiquitous among all films again? Sh*t. Well, at least the locations look nice enough when poorly rendered CGI isn't the order of business.

The film flatters to deceive at every level, and is the embodiment of so much wrong with art that doesn't understand the cultural paradigm shift that is happening right before our eyes. It is the romcom equivalent of a political drama that believes the beer and biriyani politics is still the order of the day instead of exploring the systematic suppression of citizens at large via shady policy making and dark money. We sat there, saw these misguided idiots fall in love, and were glad that they did because that is two crazy people keeping each other occupied, and that means that they are two fewer people we need to worry about. Yay! Us.
Share. Save. Connect.
Tweet
DEV (TELUGU) SNAPSHOT 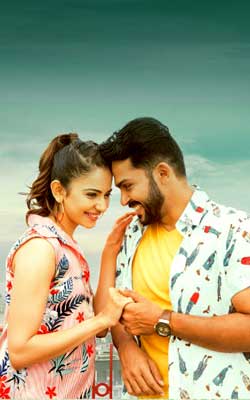 ADVERTISEMENT
This page was tagged for
Dev (Telugu) telugu movie
Dev (Telugu) reviews
release date
Karthi, Rakul Preet Singh
theatres list
Follow @fullhyderabad
Follow fullhyd.com on
About Hyderabad
The Hyderabad Community
Improve fullhyd.com
More
Our Other Local Guides
Our other sites
© Copyright 1999-2009 LRR Technologies (Hyderabad), Pvt Ltd. All rights reserved. fullhyd, fullhyderabad, Welcome To The Neighbourhood are trademarks of LRR Technologies (Hyderabad) Pvt Ltd. The textual, graphic, audio and audiovisual material in this site is protected by copyright law. You may not copy, distribute, or use this material except as necessary for your personal, non-commercial use. Any trademarks are the properties of their respective owners. More on Hyderabad, India. Jobs in Hyderabad.