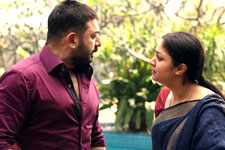 T J Reddy / fullhyd.com
EDITOR RATING
6.5
Performances
Script
Music/Soundtrack
Visuals
8.0
5.0
6.0
8.0
Suggestions
Can watch again
No
Good for kids
No
Good for dates
Yes
Wait to rent it
No
The prologue of Mani Ratnam's Nawab (Chekka Chevanta Vaanam - a stunning title for a film) has a statement that has burrowed into our minds and refuses to make its way out. The line says, "A city sheds its skin and morphs into something new every decade." Movie audiences are the same as well. For a filmmaker to be considered truly legendary, he needs to evolve with the times and appeal to fresh sets of eyes that makes their ways to the big screen. In an effort to keep up with the times, Mani Ratnam has helmed romances, epics, politically-charged message-oriented movies, character-driven dramas, and stories brimming with religious allegory.

With Nawab, he makes his first out-and-out commercial entertainer - the one blatant gap in his stellar résumé.

Like Ratnam himself, the patriarch of Nawab is a man who has evolved over the decades. Bhupathi (Prakash Raj) began his foray into the dark side as a common gangster, and gradually morphed into a real estate kingpin, a mafia lord, an educationalist and an industrialist. However, years of building a fortress-sized criminal empire doesn't change the fact that a human body is vulnerable to the destructive force of a grenade. One grenade-based attack later, Bhupathi and his wife Lakshmi (Jayasudha) are left injured and reeling.

Their sons Varada (Arvind Swamy), Thyagu (Arun Vijay) and Rudra (Silambarasan) go on the warpath hunting for the assailants. With the aid of morally-ambiguous cop Rasool (Vijay Sethupathi), the trio narrows down their list of suspects while exhibiting their desire to take on the reins of the aforementioned criminal empire from their father.

All three men have specific elements of their father's character embedded into them. Varada is a vape-smoking, mercy-free thug who holds a higher place on the food chain owing to his genes. Thyagu is a businessman whose attempts at "going legit" mirror his father's desire to be taken seriously as a prominent figure of the society rather than be looked at as just a common criminal. And finally, Rudra is a product of Bhupathi's long-forgotten impulsive nature. Ratnam and co-writer Siva Ananth use these three men as a three-pronged fork to propel their plot forward, to demystify some primal motivations and to illustrate Bhupati's rise to power without relying on tedious flashbacks. A novel idea.

However, I once read that Mani Ratnam, for all his excellence, could never make a Selvaraghavan film a la Pudhupettai or a commercial romp akin to Billa simply because of who he is as a person. That extremely well-written article stated that Ratnam's stances on morality and his upper-middle-class upbringing wouldn't let him glorify criminals and portray women as throwaway characters who are solely in service of the male gaze.

While watching Nawab, one can see Ratnam wrestling with his conditioning in real time. He refuses to let the film be a sprawling gangster epic like Naayagan, and doesn't want us to relate to the tyranny of questionable men a la Thalapathy. He wants us to view the central foursome as the poor excuses for well-adjusted humans that they are, but cannot help himself from infusing in them a few relatable traits of character development. This experiment Ratnam conducts with himself short-changes his narrative and his characters, and prevents his film from planting its roots firmly on any one side of the cinematic spectrum.

Weak foundations can destabilize even the best of actors. Swamy, Vijay, STR and Sethupathi are the cream of the crop, but not all their characters were created equal. Even though each of them gets their moment in the sun, the moments themselves weren't created equal as well. Swamy's brute physicality, Vijay's nimble athleticism and the phallic power struggle between them lead to a power vacuum that STR uses to his advantage. His unique brand of charm and Sethupathi's crowd-pleasing antics keep the film ticking along quite nicely even while keeping the audience at arm's length from every emotional beat.

Jayasudha, Jyothika, Dayana Erappa, Aishwarya Rajesh and Aditi Rao Hydari occupy roles that are in direct conflict with the ideology Ratnam has displayed over the years, but he manages to weave them into the periphery of the narrative. The film never absolves the women of their sins. They are never portrayed as victims who were assimilated into a man's world against their will. They are enablers. Active participants who are dealt with the consequences for their actions. The actresses too essay their underwritten parts quite convincingly, and each of them is given a moment to shine, but they are soon forgotten once the moment passes owing to the myriad of twists, turns and plot beats the film hits.

Almost every meaningful sequence in the film is an amalgamation of two, for the price of one. The endless intercutting both offers a sense of momentum and adds to the distance the movie keeps from its audience. However, Ratnam and DOP Santosh Sivan show that a gangster drama needn't be drenched in slow-mo shots and gloomy grey colour palettes. The fantastic choice of colour across the film and the repurposing of some classic shots to match the film's narrative are as fetching as the many gorgeous men and women on screen.

Like latter-day Mani Ratnam, his long-time composer A R Rahman too works in some slick pieces of score into a soundtrack that can be termed above average at best. The distorted first note of Segalu Chimmutondi carries with it more dread and sheer coolness than most background scores that adorn commercial cinema. However, the movie's over-reliance on it to keep its tempo up gradually exposes its lack of underlying depth.

I, for one, would have liked to have seen this story unfold as a mini-series. With Rajinikanth (Thalaivar, Mani Ratnam's Thalapathy, Super Star) playing Bhupathi and Ajith (Thala), Vijay (Ilaya Thalapathy) and Silambarasan (Little Super Star) playing the roles of the three sons who are vying for the patriarch's position in both the cinematic and the literal sense. With Vijay Sethupathi reprising his role as the outsider looking in and Kamal Hassan essaying the character of rival gangster Chinnapa whose sole motivation in the present day is peace, we have the recipe for a gangster epic for the ages.

As it stands, Nawab is a film that pays homage to The Godfather and borrows elements from Ponniyin Selvan (a Tamil novel). An added layer of a meta-narrative could have elevated it to near mythical status. OR. An infusion of a better character dynamic, a more suspenseful narrative and more dramatic moments to breathe could have sufficed as well.
Share. Save. Connect.
Tweet
NAWAB SNAPSHOT 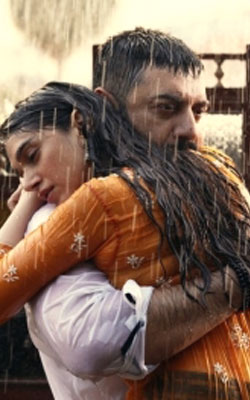 ADVERTISEMENT
This page was tagged for
Nawab telugu movie
Nawab reviews
release date
Aravind Swamy, Silambarasan
theatres list
Follow @fullhyderabad
Follow fullhyd.com on
About Hyderabad
The Hyderabad Community
Improve fullhyd.com
More
Our Other Local Guides
Our other sites
© Copyright 1999-2009 LRR Technologies (Hyderabad), Pvt Ltd. All rights reserved. fullhyd, fullhyderabad, Welcome To The Neighbourhood are trademarks of LRR Technologies (Hyderabad) Pvt Ltd. The textual, graphic, audio and audiovisual material in this site is protected by copyright law. You may not copy, distribute, or use this material except as necessary for your personal, non-commercial use. Any trademarks are the properties of their respective owners. More on Hyderabad, India. Jobs in Hyderabad.