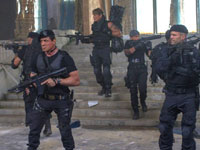 Kritika Deval / fullhyd.com
EDITOR RATING
4.0
Performances
Script
Music/Soundtrack
Visuals
5.5
4.0
7.0
7.0
Suggestions
Can watch again
No
Good for kids
No
Good for dates
No
Wait for OTT
Yes
Watching Expendables 3 does so many things for you. It makes you appreciate exactly how many holes there are even in the smoothest-looking faces. It makes you wonder if all movies featuring wannabe geriatrics (let's be real here, most of these guys haven't even hit retirement age yet). It makes you see the human flesh in ways you cannot un-see. It allows you to hate Mel Gibson, the way God intended.

The only people who might genuinely enjoy this film are hipsters doing so ironically. And, sadly, even they are a dying breed, so who was this movie made for, anyway? So, let's hope that this is the eulogy of the franchise that it seems to be, and let The Expendables just relax, already.
Share. Save. Connect.
Tweet
THE EXPENDABLES 3 (TELUGU) SNAPSHOT 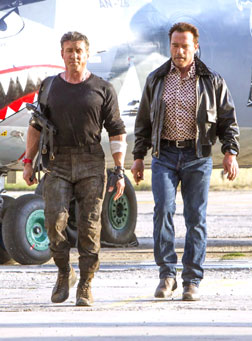