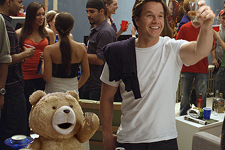 Nupur Barua / fullhyd.com
EDITOR RATING
7.0
Performances
Script
Music/Soundtrack
Visuals
8.0
6.0
6.0
7.0
Suggestions
Can watch again
Yes
Good for kids
No
Good for dates
Yes
Wait to rent it
No
Australian poet Pam Brown once said, "A teddy bear does not depend upon mechanics to give him the semblance of life. He is loved - and therefore he lives". The only explanation for the inexplicable affection for this plush toy is summarised in one word - magic - especially in the case of Ted, the protagonist of Seth MacFarlane's Ted.

It is 1985, and John Bennett (Bretton Manley) is a lonely eight-year-old in a Boston suburb. For Christmas, his parents gift him a stuffed Hasbro teddy bear, which says "I Love You" (voiced by Tara Strong) when his chest is pressed. John now wishes that the bear, which he has named Ted, could actually speak and be his best friend "forever and ever". And, as the narrator explains, nothing is more powerful than a little boy's wish (except Apache helicopters).

John wakes up to find that his wish has come true, and that Ted (Zane Cowans) is a living, talking being. Termed a Christmas miracle, Ted goes on to become Boston's biggest celebrity, appearing on live shows and newspapers.

Cut to 27 years later, and nobody gives a damn. John (Mark Wahlberg) and Ted (Seth MacFarlane) are roommates, sharing a house with John's career-oriented girlfriend, Lori Collins (Mila Kunis). John and Ted spend their days smoking up, and are wastrels, much to Lori's dismay.

In the meantime, Donny (Giovanni Ribisi), who has been a crazed Ted fan since childhood, wants to buy him off John, for his son Robert (Aedin Mincks). John and Ted still get together regularly to bond over Flash Gordon, the 1980 movie that defines them. Till things go terribly wrong.

The screenplay is a hoot, albeit with a few inconsistencies. Ted is a classic tale of bromance, and, at the same time, a romantic comedy. Ted the bear is a metaphor for a girlfriend's/wife's worst nightmare - the other man that your man just cannot live without. And it helps that he has the mouth that runs like a gutter. So much for the perceived innocence of stuffed animals.

What is incredible in the screenplay is that it is so believable that you almost forget that the little weed-smoking, foul-mouthed, beer-drinking, sex-starved little plush toy is animated, and that this would never happen in real life.

The biggest star of the movie, besides Ted, of course, is the dialogue. There is never a dull moment, and no OTT, forced wisecracks (okay, so the bit with Sam J Jones is a little OTT, but he played Flash Gordon, remember, and that was B-grade acting at its best). Expletives are liberally scattered in the script, but you will not wince, except at one explicit reference to porn action. Humour is top-notch, and even the climax, maudlin as it may seem, will have you in splits. The chemistry between John and Ted is more intense than the one between John and Lori. The fight sequence in a motel room, following a confrontation, between the two friends, is breath-taking, literally.

Mark Wahlberg has a face that makes you want to mother him, if you are above a certain age. And he manages the Boston accent perfectly. He may seem spineless and worthless as John Bennett, but you will root for him throughout the movie. Look out for the scene in which he belts out all the white-trash names for a girl.

Seth MacFarlane, the voice of Ted, is the star, as mentioned above. The Woody Allen-esque dialogue delivery, with more panache, and the ease with which he says the damnedest things, are the soul of the movie. He must have had himself in mind when he was writing the part. You can forgive the imperfect Ted for everything, including breaking up relationships and making obscene gestures to women, maybe because he is a figment of the writer's imagination, or maybe because Seth MacFarlane plays him so well.

Mila Kunis is overshadowed by the bromantic couple, and one wishes she had more fire in her as Lori. She holds up, though, and even though she becomes the reason for the split between two best friends, you cannot hate her. Ryan Reynolds in a 30-second cameo is instantly recognizable. The supporting cast is able and sporting. Of the three celebrities appearing as themselves - Norah Jones as Ted's ex-lover, Tom Skerrit as the much-in-demand celebrity and Sam J Jones as a faded star - it is the Flash Gordon actor who leaves a mark, spoofing himself and his achievements, and never once grimacing at the unkind comments that Ted and John make about his acting.

Production and costume design are above average, as is cinematography. Do not, however, expect the background, Boston, to be a character in the movie. Also, the director does not experiment too much with the colour palette. The animation is seamless, and therefore distracts you from any other technical snags that the movie may have.

Willingly suspend your disbelief and cynicism, and catch Ted this week. At the heart of the movie is a boy's attachment to the childhood toy that became his only companion, and promoted him from the neighbourhood underdog to a confident young man. It is also a story of friendships, love, the ability to mature and let go, and of acceptance. Ted will warm the cockles of your heart and make your sides ache with laughter.
Share. Save. Connect.
Tweet
TED SNAPSHOT 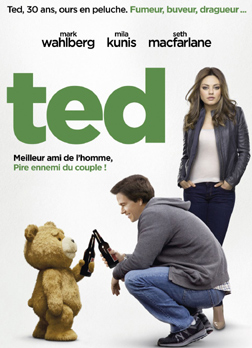 ADVERTISEMENT
This page was tagged for
Ted english movie
Ted reviews
release date
Mark Wahlberg, Mila Collins
theatres list
Follow @fullhyderabad
Follow fullhyd.com on
About Hyderabad
The Hyderabad Community
Improve fullhyd.com
More
Our Other Local Guides
Our other sites
© Copyright 1999-2009 LRR Technologies (Hyderabad), Pvt Ltd. All rights reserved. fullhyd, fullhyderabad, Welcome To The Neighbourhood are trademarks of LRR Technologies (Hyderabad) Pvt Ltd. The textual, graphic, audio and audiovisual material in this site is protected by copyright law. You may not copy, distribute, or use this material except as necessary for your personal, non-commercial use. Any trademarks are the properties of their respective owners. More on Hyderabad, India. Jobs in Hyderabad.