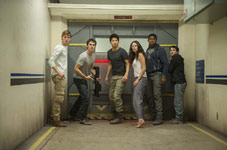 Josh / fullhyd.com
EDITOR RATING
6.0
Performances
Script
Music/Soundtrack
Visuals
6.0
5.0
6.0
8.0
Suggestions
Can watch again
No
Good for kids
Yes
Good for dates
Yes
Wait to rent it
Yes
Maze Runner: Scorch Trials is the second part of a film trilogy based on the young-adult fiction Maze Runner pentalogy. That one-line description summarizes the myriad complications which arise in reviewing the film. To find our way through these complications we rely on the clauses in The Made Up Code of Best Practices in Film Reviewing.

Clause #11 - If the film is a sequel, do compare it with the prequel.

The Maze Runner, if you aren't aware, is about a bunch of teenage boys who are dropped by a invisible secret entity called WCKD (pronounced Wicked) in a place called the Glade which is surrounded by the Maze. The boys have no idea why they are there and they can't remember anything from their lives before landing in the Glade. They can't leave the place because the Maze is ever-changing and monsters called Grievers lurk within the Maze waiting to kill any kid who stays in the Maze overnight.

A new kid, Thomas (Dylan O'Brien), does things differently and manages to get the boys (and one girl) to escape, to find that the earth has been scorched by the sun, a brain virus called the Flare has inflicted many, and the World Catastrophe Killzone Department (WCKD) is picking up the immune children (called the Immunes) and dropping them in these mazes to study their brain activity in the hope of creating a cure for the Flare.

In the second part, the Immunes realise that their escape from the maze landed them into WCKD's trials again. So they escape from their confinement and, fighting off the Cranks (Flare-infected zombies) and WCKD, make their way to the Right Arm, an army in the mountains who are fighting WCKD, too.

As preparation for reviewing Scorch Trials, this reviewer endeavoured to watch Maze Runner just the day before, and grimly noted how the excessive jargon and over-explanation pulls down the adventure of the film. Luckily, the director (Wes Ball) seems to have noted it, too. He relaxes on the exposition in Scorch Trials and focuses on the action-adventure with satisfying results. This may not work for everyone. That brings us to the next complication in the review.

Clause #26 - If the film belongs to a specific sub-genre, at least a part of the review should assess the likeability of the film for the target audience.

Clause #7 - If the film is based on a book, attempt to comment on how loyal the adaptation is.

The Maze Runner series is young-adult fiction. It is aimed at teenagers, with protagonists as teenagers (although they might be played by considerably older people) trying to solve problems often caused by full-grown adults. The series by itself has been rather successful, and that also reflects in the commercial success of the informatively dense first part.

The bad news for the fans is that we can reliably state that Scorch Trials, the movie, diverges considerably from the book. In fact, it diverges so much that it should probably be called Divergent (hah! young adult joke right there!).

If you aren't a fan of the book, though, there are high chances that you'll enjoy Scorch Trials. The wafer-thin plot works for the film, and like we said earlier, Wes Ball makes this more of a Walking Dead movie and an escape-adventure film rather than stick to the book and dole out copious amounts of information.

This brings us to the last and perhaps most significant part of the review.

Clause #42 (fondly called The Answer To Everything Clause) - Whatever be the movie, whatever genre it may belong to, however strange it might be, do assess the cinematic quality of the film in whatever it aspires to. Once you estimate the ambition of the film, evaluate it on its own parameters.

The Scorch Trials is a very well-made action film. It is competently directed, and the action set-pieces are superbly executed. There is no sense of drag as you join the Immunes on their journey to the mountains. The zombie-like Cranks, the big sand dunes and the dystopian post-apocalyptic cities are all put together with considerable effort, and you feel entertained all through. This, perhaps, was the whole intention. You won't find many people complaining about the film because it gives you your money's worth in terms of entertainment.

The cinematography excels at places. Whether it is in the darkness of a desolate shopping mall infested with the Cranks, or the vast expanses of the sand desert that the Immunes have to trudge through, the frames always remind you that there is something mighty and sinister behind their backs. The music sounds a lot like Hans Zimmer but works well in the context. The acting is just about passable but you can't really blame the actors when they have to keep mouthing really strange stuff all the time. But that doesn't matter because that is not the point of this movie.

You may not care much for the film's plot or script if you haven't read the books. But if you like watching cool CGI with great action set-pieces in 3D, Scorch Trials isn't a bad choice at all to spend your money on.
Share. Save. Connect.
Tweet
MAZE RUNNER: THE SCORCH... SNAPSHOT
MAZE RUNNER: THE SCORCH TRIALS (3D) SNAPSHOT 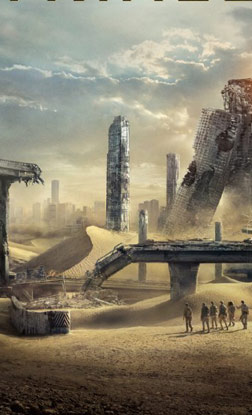 ADVERTISEMENT
This page was tagged for
Maze Runner: The Scorch Trials (3D) english movie
Maze Runner: The Scorch Trials (3D) reviews
release date
Dylan O'Brien, Thomas Brodie-Sangster
theatres list
Follow @fullhyderabad
Follow fullhyd.com on
About Hyderabad
The Hyderabad Community
Improve fullhyd.com
More
Our Other Local Guides
Our other sites
© Copyright 1999-2009 LRR Technologies (Hyderabad), Pvt Ltd. All rights reserved. fullhyd, fullhyderabad, Welcome To The Neighbourhood are trademarks of LRR Technologies (Hyderabad) Pvt Ltd. The textual, graphic, audio and audiovisual material in this site is protected by copyright law. You may not copy, distribute, or use this material except as necessary for your personal, non-commercial use. Any trademarks are the properties of their respective owners. More on Hyderabad, India. Jobs in Hyderabad.