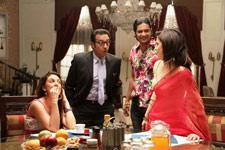 Swayamsrestha Kar / fullhyd.com
EDITOR RATING
3.0
Performances
Script
Music/Soundtrack
Visuals
4.0
2.0
3.0
3.0
Suggestions
Can watch again
No
Good for kids
No
Good for dates
No
Wait to rent it
Yes
First off, this reviewer has seen worse films. But then, those films were not fortunate enough to be graced by the presence of "bad man" Gulshan Grover, or for that matter, by that of Ali Faizal - someone who has done movies that have been vastly better made, better promoted and better received.

Granted, these films which are worse than Baat Bann Gayi might also have had considerably less production costs, and considerably more oblivious costume designers.

Also, these films might have been made when script writers computed dialogues based on templates that had proven to be crowd-pleasers ("Insert emotional scene here", "Villain emits evil laugh and eyes heroine lecherously", "Dishoom!", etc).

These films (if you were following us so far, you will remember that we are talking of movies that are most definitely worse than Baat Bann Gayi) might also have been mere excuses for parents to take Munni and Chottu out for the weekend, since in those days, the little tykes didn't have their personal iUniverse (complete with the latest iPhone and a customized Macbook Air).

Alright, alright, so the movie actually has no excuse for sucking so monumentally. Don't blame us; we were only trying to be kind.

The premise is a watered down version of Bade Miyaan Chhote Miyaan. Kabir (Ali Faizal) is a successful novelist who's in love with a bimbo called Rachna (Anisa Butt). Rachna's uptight brother, Laxmi Nivas (a dignified Gulshan Grover playing a professor of philosophy), is on the lookout for a serious academician as his brother-in-law.

We think that the reason he was hell-bent on finding someone intelligent for his sister was that there would otherwise be an alarming absence of brains in the union (what with pyaari behena possessing wits that would leave enough space if placed inside an eggcup).

Kabir poses as a bespectacled geek to win over the professor, and through his shoddy attempts, lampoons and forever besmirches (at least in the mind of this reviewer), Amitabh Bachchan's class act as a fake Botany professor in the laughathon Chupke Chupke.

Hardly has Kabir managed to wriggle his way into big brother's heart than his doppelganger, Rasiya Bihari, makes an entrance. He's a crude small-time gangster who goes around forcefully evicting people from their homes. And if a deadpan Ali Faizal in three roles isn't bad enough news, there's Gulshan Grover playing an effeminate dancer called Debu Darruwallah - another one of Rasiya's prospective victims.

How these four humshakals end up orchestrating a burlesque comedy of errors forms the plot of the movie.

The plot relies a lot on comedy, and that is why it sags, heaves, tears apart at the seams, and by the climax, comes crashing down, the whole thing replete with innovatively created background music that goes "toing!" at all the appropriate moments. Seriously, why do we have such a high tolerance for jokes that target homosexuals so offensively?

The screenplay is what you get up and go to a run-down theatre on a weekend morning for. The dialogues make you go "Really? The two people onscreen look completely like each other? Thanks for pointing it out for the umpteenth time; we were still floundering around to see it!"

There is some relief provided by Rasiya's goon colleagues, one of whom is extremely pre-disposed to getting teary-eyed at the slightest pretence (like he was the star of an Ekta Kapoor sapcom or something).

Then, there is one joke (ONE decent joke in an entire movie that was advertised as a comedy... hmm, maybe we will win an Oscar this time) that you may like. When Rasiya presents a gift to his mafia godfather with a flourish and a pompous "From Rasiya, with love", you burst out laughing at the 007 reference. And then you realise that it was probably unintentional. Sigh.

To give him his due credit, Ali Faizal does make an effort, and we can somewhat see the contrasts in all the three characters that he plays. Gulshan Grover is nowhere close to what he used to be when he had terrorised nubile damsels onscreen in the past. And we don't even remember what the female leads were doing in the film to pass appropriate comments on their performances.

Movies like Bat Bann Gayi are a good reason to stay at home in the weekend and bond with your bed. Because otherwise, you would be spending two hours trying to bond with a sticky seat in the faintly stinking Sapna theatre. Don't worry, though - the "toing!" noises will keep you awake.
Share. Save. Connect.
Tweet
BAAT BANN GAYI SNAPSHOT 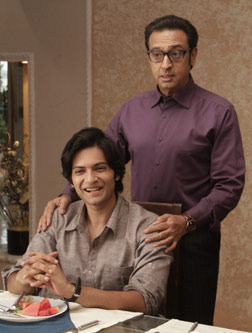 ADVERTISEMENT
This page was tagged for
Baat Bann Gayi hindi movie
Baat Bann Gayi reviews
release date
Ali Fazal, Gulshan Grover
theatres list
Follow @fullhyderabad
Follow fullhyd.com on
About Hyderabad
The Hyderabad Community
Improve fullhyd.com
More
Our Other Local Guides
Our other sites
© Copyright 1999-2009 LRR Technologies (Hyderabad), Pvt Ltd. All rights reserved. fullhyd, fullhyderabad, Welcome To The Neighbourhood are trademarks of LRR Technologies (Hyderabad) Pvt Ltd. The textual, graphic, audio and audiovisual material in this site is protected by copyright law. You may not copy, distribute, or use this material except as necessary for your personal, non-commercial use. Any trademarks are the properties of their respective owners. More on Hyderabad, India. Jobs in Hyderabad.