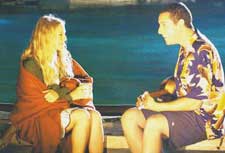 Charisma Murari / fullhyd.com
EDITOR RATING
5.0
Performances
Script
Music/Soundtrack
Visuals
NA
NA
NA
NA
Suggestions
Can watch again
NA
Good for kids
NA
Good for dates
NA
Wait to rent it
NA
With 50 First Dates, Adam Sandler makes a foray into never-before land. He makes a crossover from a pathos inspiring loser with a slurred diction, to a super-stud playboy who's chasing skirts all over the place. And, what can you even say about women who only seek wanton physical pleasures from Sandler? Desperate. Highly.

Roth is a marine biologist who has a seal and Rob Schneider for his best pals. So, there are a lot of double flips into the water, lazy grunts and randy growls, and mustachioed facial muscles. The seal, however, remains extremely dignified through out the movie except when it decides to puke its guts all over Roth's assistant, providing for a completely unsolicited lesson in projectile motion and absolutely no laughs.

Anyhoo, Lucy's pretty and Roth's pretty crazy. Their first encounter is cute, the subsequent ones - get cuter as he wows her over and over again, each time.

Why? Because Lucy suffers from short-term memory loss. Which in English translates to this - she cannot retain any new information for longer than a day. And her old info database has been updated only till the point where she met with a near-fatal car crash that left her with this condition.

Lucy's doting father, brother and friends go to great lengths to recreate the same memories for her. And Roth goes to great lengths to get beyond first base with her. Once, when he reaches for a feelskie while they are getting cozy, she lets out a very startled, 'what are you doing?' Let's see… reaching for the Braille name tag she's not wearing?

Anyway, somehow, the fact that Lucy has this Hollywood-special goldfish-syndrome becomes something you want to believe because you've started to drift along nicely with the idea of 50 first kisses with the guy you are in love with.

50 First Dates makes for a great date-movie. There are the soft, romantic moments that set the mood and tempo just right. Rob Schneider is brilliant as Ula, and the seal has the best personality you'll ever come across. Watch the movie, it might make the dinner afterwards more interesting.
Share. Save. Connect.
Tweet
50 FIRST DATES SNAPSHOT

ADVERTISEMENT
This page was tagged for
50 First Dates english movie
50 First Dates reviews
release date
Adam Sandler, Drew Barrymore
theatres list
Follow @fullhyderabad
Follow fullhyd.com on
About Hyderabad
The Hyderabad Community
Improve fullhyd.com
More
Our Other Local Guides
Our other sites
© Copyright 1999-2009 LRR Technologies (Hyderabad), Pvt Ltd. All rights reserved. fullhyd, fullhyderabad, Welcome To The Neighbourhood are trademarks of LRR Technologies (Hyderabad) Pvt Ltd. The textual, graphic, audio and audiovisual material in this site is protected by copyright law. You may not copy, distribute, or use this material except as necessary for your personal, non-commercial use. Any trademarks are the properties of their respective owners. More on Hyderabad, India. Jobs in Hyderabad.