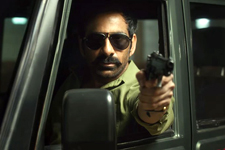 Anil Bandhakavi / fullhyd.com
EDITOR RATING
7.0
Performances
Script
Music/Soundtrack
Visuals
8.0
6.0
6.0
8.0
Suggestions
Can watch again
No
Good for kids
Yes
Good for dates
Yes
Wait to rent it
No
Fast food sells because it checks all the boxes. It's not experimental, it won't blow you away with its novelty, but it will properly deliver what's familiar, and generally won't disappoint. It's manufactured to give you the satisfaction you paid for. Krack, set to target the mass audience this Sankranti, is a "fast-flick" that hits all the marks, and more. You will leave the theatre feeling satisfied with the entertainment you've received.

Written and directed by Gopichand Malineni, Krack delivers all the punches that you would expect in a Telugu mass flick. Sai Madhav Burra, who drafted the dialogues, ensures that all the spices are in the mix, and Ravi Teja executes like a surgeon performing a routine procedure.

Inspector Potharaju Veera Shankar (Ravi Teja) is a hot-headed cop and family man, who's hardly bashful in his methods to defend the principles of justice. He's considered a troublemaker among his superiors as he employs his prerogative quite freely while on the job, and is the quintessential Tollywood alpha-male, with the walk and the talk to go with it.

The film is played out over three timelines that are set in Kurnool, Kadapa and Ongole. Each town witnesses a local gangster having to deal with the inevitable iron fist with which Shankar does his policing. Most of the movie is an anecdotal flashback that accounts the difficulties faced by Katari Krishna (Samuthirakani), an Ongole mobster, and his mistress Jayyamma (Varalaxmi Sarathkumar), when Shankar joins the local force as Circle Inspector.

The dog-eat-dog clash of prides between Shankar and Katari Krishna is sprinkled with a series of subplots and twists, some of which are resolved in too simplistic a manner in comparison to the build-up. However, the wide array of fight sequences and special effects are impressive enough to keep one pushing off those bathroom breaks. There is also a level of gore in the film that is pulled off quite seamlessly.

If you're walking into Krack looking for a story that will swoon the critics, you might as well take a bestseller book along with you, or you might find yourself yawning. However, most of the substance in this movie comes from the spot-on depiction of the characters that are featured. Both Samuthirakani and Varalaxmi Sarathkumar project the pride and sinisterism that you would imagine within small-town Andhra and Rayalaseema mobsters. The associated characters are also weaved into the story quite well, making the film a casting success. The henchmen that carry out Jayyamma's orders are also quite a creative aberration from the usual side-gangsters that we're used to seeing in Telugu film. Shruti Haasan, who plays Shankar's wife (Kalyani), also has a crucial role to enact at a significant juncture, but there is a long period in the film in which she's relatively non-existent.

One qualm that a nit-picky viewer might express is an imbalance in the time dedicated to the various individual segments in the film - there is definitely some post-intermission fat that could've been trimmed in the final edit. However, one might also argue that reaffirmation of the godly status of the hero is never a mistake in a mass flick.

Musically, the movie deserves an average rating. The songs sound manufactured off a template, and there is no unique element that remains with you. If you're used to the Telugu movie format, you will find yourself guessing the exact points at which there will be a song, and the tune in each case is made to simply match the mood. However, the cinematography by G K Vishnu is what, along with the actors' performances, holds this film together. The action sequences are all very different from each other, each with its own surprise and suspenseful flavour.

In conclusion, Krack is an apt release for this Corona-era Sankranti festival. It's got high energy, the hero is a traditional success, the special effects will justify the price on your ticket stub, and you might leave wondering whether you'll get to see more of this "krack" character again. This "fast-flick" is definitely made to order. 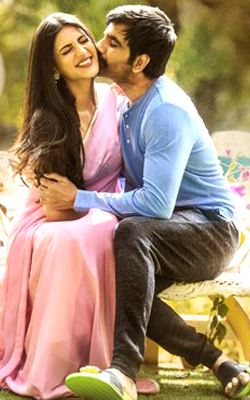 ADVERTISEMENT
This page was tagged for
krack full movie
Krack telugu movie
Krack reviews
release date
Ravi Teja, Shruti Haasan
Follow @fullhyderabad
Follow fullhyd.com on
About Hyderabad
The Hyderabad Community
Improve fullhyd.com
More
Our Other Local Guides
Our other sites
© Copyright 1999-2009 LRR Technologies (Hyderabad), Pvt Ltd. All rights reserved. fullhyd, fullhyderabad, Welcome To The Neighbourhood are trademarks of LRR Technologies (Hyderabad) Pvt Ltd. The textual, graphic, audio and audiovisual material in this site is protected by copyright law. You may not copy, distribute, or use this material except as necessary for your personal, non-commercial use. Any trademarks are the properties of their respective owners. More on Hyderabad, India. Jobs in Hyderabad.