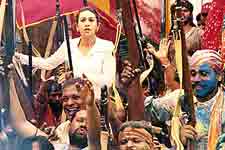 Shakti is a weary and at times frightful story of a woman who just about manages to get herself and her son out of a situation that she doesn't want to be in. The story is a word-for-word copy of Krishna Vamsi's earlier - and superior - undertaking Antahpuram, which was in turn recycled from 'Not Without My Daughter', the true story of Betty Mahmoody's escape from Iran with her daughter. Part-thriller, part-perception-clash-yarn, the film takes advantage of the Indian perception of a barbarian feudal culture in the remote areas. 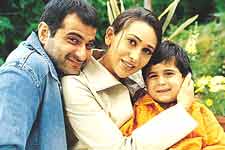 Nandini (Karisma Kapoor) is happily married to Shekhar (Sanjay Kapoor) in Canada, and gives birth to Raja. They would have lived happily ever after, but Shekhar receives bad news from his home in India, and they are back there. Enter Narasimha (Nana Patekar), the undisputed lord of the surrounding 40 villages and father of Shekhar. Soon the latter is shot at by a sniper (Prakash Raj) employed by his own uncle, an arch enemy of Narasimha. 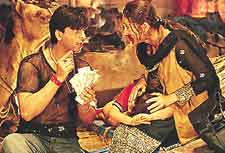 Now begins Nandini's battle for her son with Narasimha, who wants the grandson so he can have vengeance. How Nandini and her son escape from Narasimha with the help of a Dubai-dreamer (Shah Rukh) is what is dealt with in the climax.

The ending of the movie is a foregone conclusion, but it comes as a blessing after the film's fatiguing game of cat and mouse. The movie loses its very objective due to its overload of unnecessary detail and numerous parallel threads (tranquil Canadian life, love, mother's love, barbarous culture...). 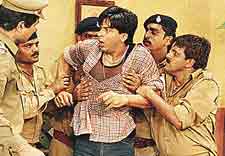 The performances are either overboard (Karisma, Shah Rukh) or below average (Nana). Karisma's performance is a scream, literally. Her character in the movie has much more detail to it than what she actually delivers by overacting, screaming and squealing. One particular blood-curdling scream (or screech or howl or roar or whatever) makes you run for cover (mark our words when we say this)!

Nana's character too had a lot of scope that could have been capitalized on as Prakash Raj did in Antahpuram, but it appears that Nana simply chose not to. We guess he was most likely content with yelling and kicking people. Adding to the mediocrity are the music and background score. The Ash-Shah Rukh item number was clearly uncalled for.

ADVERTISEMENT
This page was tagged for
shakti hindi movie
Shakti (Hindi) hindi movie
Shakti (Hindi) reviews
release date
Shahrukh Khan, Aishwarya Rai
Follow @fullhyderabad
Follow fullhyd.com on
About Hyderabad
The Hyderabad Community
Improve fullhyd.com
More
Our Other Local Guides
Our other sites
© Copyright 1999-2009 LRR Technologies (Hyderabad), Pvt Ltd. All rights reserved. fullhyd, fullhyderabad, Welcome To The Neighbourhood are trademarks of LRR Technologies (Hyderabad) Pvt Ltd. The textual, graphic, audio and audiovisual material in this site is protected by copyright law. You may not copy, distribute, or use this material except as necessary for your personal, non-commercial use. Any trademarks are the properties of their respective owners. More on Hyderabad, India. Jobs in Hyderabad.