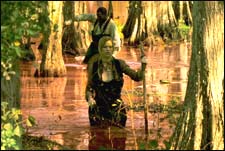 Samrat Sharma / fullhyd.com
EDITOR RATING
3.0
Performances
Script
Music/Soundtrack
Visuals
NA
NA
NA
NA
Suggestions
Can watch again
NA
Good for kids
NA
Good for dates
NA
Wait for OTT
NA
Hillary Swank has won two Oscars. Two. She is not just acclaimed as a great actor, she is universally acknowledged to be at the top of her game when she faces the arc lights. So, in what we will henceforth call the Halle Berry effect, she must go ahead and do crap films. It is probably a curse of some sort – talented actresses who win universal acclaim always get insecure about their commercial viability, and end up doing the very first studio crap that is offered to them.

I’m sorry, but I have no other way of explaining this film. Brought to us by the same people who wrote and created House Of Wax, Gothika etc., the epitome of bad horror if you will, The Reaping is a tired, hackneyed Christian thriller, and not only does it steal from its obvious influences, it goes ahead and makes a mockery of them, too.

It kills you to see Swank being wasted like this, because unlike the bad decisions Berry made, she is in top form here, and almost carries the whole film through. Almost, though. In an obvious attempt to break away from the almost-man image, a perennially tank top wearing and cleavage flashing Swank plays Katherine Winter, a missionary who’s lost her husband and daughter in Africa in a mob attack. Faith lost, she is now the leading specialist scientifically explaining any miraculous or religious discoveries the world over.

Her latest mission lies in an American southwest town called Haven, where the river has accrued a very morbid color of red. The townsfolk are convinced that this is the doing of Loren (AnnaSophia Robb), a 12-year-old girl, whose brother dies under mysterious circumstances. Katherine sets her jaw and starts researching to disprove the biblical plague theory. But it’s a horror movie innit? Soon it bloody starts raining frogs and the whole town is covered in locusts.

A local schoolteacher Doug (David Morrissey, in the most unbelievable of Southern American accents), who is merely in the film to act as love interest, is helping her along the way. So is Father Costigan (Stephen Rea), a priest and a friend who warns her of danger via long distance communication.

It is this arbitrary nature of the film that makes it sink so much, though. Characters are introduced just to make sure you know who he is when he dies from locust attack. All the exhausted tricks of the Christian horror genre are played out here with a mechanical tempo, and the most shopworn of the tricks is doled out to fill the film with moments of creepiness.

Only, it doesn’t make much sense, and it definitely does not always work. The mystery is not too much of one, because there are hints and premonitions that may as well have been written on banners and paraded in front of our eyes. The genuinely creepy moments fall through because, hey, it was all a dream! Don’t you know! It could have been an intelligent film about the nature of faith, but it is just another stupid film that tries to impress us with its vapidity.

The dialog is as hackneyed and worn out as they come, with only Swank making an effort to infuse some credulity in them. And it all goes terribly haywire when the film shifts gear from subtle biblical references to an all-out Egyptian plague fest. Blood, locusts, frogs, dead cattle, maggots… you name ‘em, they have ‘em. Which is all cool and everything rendered in CGI, as it were, but it just becomes goofier and goofier, instead of being scary.

Director Stephen Hopkins cannot be appropriated all the blame, though, as he does maintain a rapid pace to the proceedings, and tries to make us not think about the humongous holes in the script by not giving us the time to. Valiant as the effort is, the screenplay is shallow, mean-spirited, and utterly devoid of even one rupee of creativity, and the utter stupidity of the exercise just manages to stick its neck out.

This is an utter waste of your time, and if you really want to watch a horror film with a creepy kid, go rent Ringu or something. All the CGI in the world can’t make this outrageously silly movie worth a watch, locusts or no. Amusing as the decisions behind making this film may be, it does indeed stink up the joint.
Share. Save. Connect.
Tweet
THE REAPING SNAPSHOT

ADVERTISEMENT
This page was tagged for
The Reaping english movie
The Reaping reviews
release date
Hilary Swank, David Morrissey
theatres list
Follow @fullhyderabad
Follow fullhyd.com on
About Hyderabad
The Hyderabad Community
Improve fullhyd.com
More
Our Other Local Guides
Our other sites
© Copyright 1999-2009 LRR Technologies (Hyderabad), Pvt Ltd. All rights reserved. fullhyd, fullhyderabad, Welcome To The Neighbourhood are trademarks of LRR Technologies (Hyderabad) Pvt Ltd. The textual, graphic, audio and audiovisual material in this site is protected by copyright law. You may not copy, distribute, or use this material except as necessary for your personal, non-commercial use. Any trademarks are the properties of their respective owners. More on Hyderabad, India. Jobs in Hyderabad.