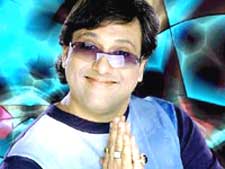 EDITOR RATING
3.0
Performances
Script
Music/Soundtrack
Visuals
NA
NA
NA
NA
Suggestions
Can watch again
NA
Good for kids
NA
Good for dates
NA
Wait to rent it
NA
You can never accuse Govinda of trying to make it to the Filmfares, nor his movies of being classy. But all in all, they have a class of their own. There is a Govinda Algorithm (GA) by which this class derives its soul. So, we will try to benchmark Kullam Khulla Pyar Karenge against the GA first. Let's see what we have. All Govinda movies have:

1. A main character, Govinda himself, who tries to squeeze himself in shortening-by-the-day clothes, while he also tries to go short on intelligible vocal matter.

2. Kader Khan, in the role of father, father-in-law, neighbor or employer, depending on the day of the week the movie was launched.

3. Satish Kaushik, playing the role of a fat sidekick, a fat friend or a fat villain, but always banking on his rotundity to roll out some laughter.

4. One sexy, massaged, plucked, exercised livewire of a woman, with good strong legs and aged between 18 and 24. A different woman chosen per movie, so as to facilitate easy differentiation of one G movie from another.

5.There may also be the likes of Shakti Kapoor, Makaudi and a few others.

6.The GA also says that the main character, Govinda, must be allowed a free hand - rather a free tongue - till the clueless audience gets so confused as to seek refuge in compulsive laughter.

Our story of Khullam Khulla Pyar Karenge hugely agrees with the above script, with only a few deviations. Preity Zinta may have most, or all, of the above qualifications, but she comes nowhere near being a livewire - perhaps she just couldn't act dumb without feeling dumb. And it showed on the screen. No, not her acting, but her feelings.

Anyway, let's proceed with the analysis; Khullam Khulla Pyar Karenge is certainly not like every third Govinda movie - it is like every Govinda movie you had the misfortune of seeing. But what's the point of writing a review if we don't reveal the story with all its mind-tickling details? Only, if you must, then do it yourself. The tickling.

Anna (Sada Shiv Amrapurkar) is the big don of the underworld, and Govardhan (Kader Khan) and Damani (Prem Chopra) are the dons of lesser terrains. By some statistics of dondom, Anna decrees that Govardhan's daughter, Saakhi (Priety Zinta), must wed Damani's son (Monish Behl).

Govinda is a Bihari in Mumbai, and after a few incidences with Preity, he manages to first lose his job, then finds the on-road-to-see-the-girl bound Monish, replaces him, and places himself as Damani's future son-in-law. He also manages to pull the bluff on Govardhan by reminding him of his non-existent ex-love interest.

All this he does keeping a straight face, and without revealing a trace of blush. Though highly desirable, but hardly likely, a glint of guilt was required - not over the rigmaroles, but over the incoherence of the entire plot. Khullam Khulla Pyar Karenge, does not classify even along with the regular G stuff, it neither boasts of G brand clothes nor of G songs.

But if you still insist on finding out the answers to questions like what purpose Preity serves, and many more - you are forewarned to go ahead and try your luck. Do retrospect later - was it preferable to spending the evening with a cold box of juice watching some action on the bug zapper?
Share. Save. Connect.
Tweet
KHULLAM KHULLA PYAAR KARENGE SNAPSHOT

ADVERTISEMENT
This page was tagged for
khullam khulla pyaar kare movie
khullam khulla pyar karenge movie review
Khullam Khulla Pyaar Karenge hindi movie
Khullam Khulla Pyaar Karenge reviews
release date
Follow @fullhyderabad
Follow fullhyd.com on
About Hyderabad
The Hyderabad Community
Improve fullhyd.com
More
Our Other Local Guides
Our other sites
© Copyright 1999-2009 LRR Technologies (Hyderabad), Pvt Ltd. All rights reserved. fullhyd, fullhyderabad, Welcome To The Neighbourhood are trademarks of LRR Technologies (Hyderabad) Pvt Ltd. The textual, graphic, audio and audiovisual material in this site is protected by copyright law. You may not copy, distribute, or use this material except as necessary for your personal, non-commercial use. Any trademarks are the properties of their respective owners. More on Hyderabad, India. Jobs in Hyderabad.