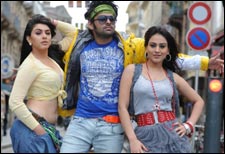 Deepa Garimella / fullhyd.com
EDITOR RATING
6.0
Performances
Script
Music/Soundtrack
Visuals
7.0
4.0
6.0
7.0
Suggestions
Can watch again
No
Good for kids
No
Good for dates
Yes
Wait for OTT
Yes
Like a plate of salted curd rice meant to soothe your tummy after a suspicious feast that threatens you with offensive repercussions, Kandireega is basically comfort food for the starved. Not very great-tasting, but will do. And this week's other big release might just be responsible for helping Kandireega's cause.

Kandireega is loaded with cliches, and grumbling about the complete lack of novelty in either its plot or its treatment will do you no good. Seenu (Ram), who lives in Anakapalle, is a loser who starts out for Hyderabad to prove a thing or 2 to his village by studying for his degree. In the city, he falls in love with Shruti (Hansika), who is engaged to the maniacally possessive ruffian Bhavani (Sonu Sood). How Seenu manages to oppose warring forces and unite with his lady love forms the story.

The plot is the customary Telugu mix of romance, fights and slapstick comedy. The post-interval half of the flick centres around preparations for a wedding, and is dominated by the humour. The comedy isn't as side-splitting as in an Allari Naresh movie, but work for some audiences.

The general humour aside, some of the film's jokes speak of creativity - the "paga-kasi" one starring Brahmaji, for example, is a scream. The tomfoolery surrounding the fake romances succeeds in delighting people as well. Also, the girl who dubbed for Aksha deserves credit for getting her Telangana accent right and bringing in the chuckles while at it.

But that's about it - the movie, overall, is as predictable as it is ridiculous. Seenu is a featherweight 20-something who can break the bones of hardened thugs and not suffer a scratch in return, and we're also supposed to not question his all-consuming control of any situation he's put in. Indeed, there's nothing new on offer, in terms of either the plot or even the dialogues. Plus, there's the standard quantity of violence and blood on display.

Kandireega depends solely on Ram and Sonu Sood to get by, and they deliver. Ram, for his part, is a good stand-in for the original titleholder of Hyperactivity Inc. in Telugu cinema, Ravi Teja, and helps make this a tolerable entertainer.

Sonu Sood makes for some eye-candy, but his caricaturish expressions camouflage the real stuff that he's capable of. Jayaprakash Reddy is quite hilarious. Srinivas Reddy, Chandramohan and M S Narayana are good accessories to the humour. The actors are, sadly, limited by the writing.

Aksha has a more emotive role than Hansika, and is easily the more talented of the two. The girls do have their presence in the songs, though.

The songs are acoustic concoctions solely designed for teen-maar occasions. The visuals are as good as a normal high-budget Telugu film.

Kandireega passes muster if you have to watch something, but isn't a good bet otherwise.
Share. Save. Connect.
Tweet
KANDIREEGA SNAPSHOT

ADVERTISEMENT
This page was tagged for
Kandireega telugu movie
Kandireega reviews
release date
Ram, Hansika
theatres list
Follow @fullhyderabad
Follow fullhyd.com on
About Hyderabad
The Hyderabad Community
Improve fullhyd.com
More
Our Other Local Guides
Our other sites
© Copyright 1999-2009 LRR Technologies (Hyderabad), Pvt Ltd. All rights reserved. fullhyd, fullhyderabad, Welcome To The Neighbourhood are trademarks of LRR Technologies (Hyderabad) Pvt Ltd. The textual, graphic, audio and audiovisual material in this site is protected by copyright law. You may not copy, distribute, or use this material except as necessary for your personal, non-commercial use. Any trademarks are the properties of their respective owners. More on Hyderabad, India. Jobs in Hyderabad.