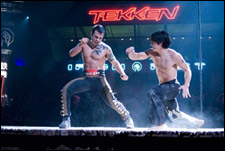 Nupur Barua / fullhyd.com
EDITOR RATING
5.0
Performances
Script
Music/Soundtrack
Visuals
5.0
5.0
5.0
7.0
Suggestions
Can watch again
No
Good for kids
No
Good for dates
No
Wait for OTT
No
Hollywood's obsession with video games is a reality, and the reasons are simple. Most of tinsel town's young directors today belong to a generation that grew up on video games, and adapting them to scripts and movies, while not exactly a novel move, comes naturally. These filmmakers understand the language and the passion, and the present tech-savvy generation is definitely an audience.

The question, then, is how many such adaptations have really worked. In recent memory, Prince Of Persia: The Sands Of Time and Tron generated plenty of hype, but didn't set cash registers ringing frantically. True, there was an audience, and an excited one at that, that, loyal to the games, waited for these movies with bated breath. However, disappointment was inevitable, because in all that enthusiasm, blood and gore in the films, the semblance of a script was somehow lost.

And Tekken is no better. It is rumoured that Katsuhiro Harada, the director of the 1994 video game series, was uninterested in watching this adaptation. More like a B-grade film than a Hollywood blockbuster, the only saving grace is the action, to some degree. The story of a slum kid who takes on the head of a corporation is best left to work itself out in a video game.

The year is 2039. Terror Wars have destroyed the world. A few big corporations run the planet, and the largest of these companies is the North American Tekken, run by the senior Heihachi Mishima (Cary-Hiroyuki Tagawa). His ambitious, sadistic son, Kazuya Mishima (Ian Anthony Dale), is in charge of the annual King of the Iron Fist Championship, hosted this year by Tekken City.

On the outskirts of the city boundaries lies Anvil, the slums. Jin Kazama (Jon Foo) lives here with his mother, Jun (Tamlyn Tomita), who has taught him a mix of necessary martial arts. When the Mishima scion kills Jun, the bereaved and angered Jin decides to enter the Championship on a wild card entry, intending to kill the Mishimas.

Following the pattern of fight movies of the '80s and the '90s, the underdog takes on the villainous contenders to the throne, and surprises them all with his street-fighting techniques. There are 9-10 major fight sequences, and Jon Foo is in his element in all of them. From Parkour and Capoeira to Judo and Samurai sword-fighting, the actor displays his skills with Ã©lan.

The credit, however, goes to Cyril Raffaelli, the action director and choreographer. Raffaelli is best known for his Parkour-centric movie with David Belle, District 13B, and is considered the founder, along with Belle, of the Parkour form of free running.

Jon Foo, despite his obvious skills, is not much of an actor. He makes up for it with all the fighting, but emotional scenes are beyond him. Even when he has to romance Kara (Mircea Monroe) and Christie (Kelly Overton), he ends up looking more lecherous than chocolate-boy romantic.

Tamlyn Tomita is a firebrand, but her screen-time in this movie is too little. Her training sessions with the young Jin are graceful and powerful. Cary-Hiroyuki Tagawa is an authoritative figure, and he plays his role with dignity.

Ian Anthony Dale as the antagonist is apt for the role. Although he sneers, scowls, drinks, makes love, and orders random killings throughout, he will be best remembered for the climax scene in which he fights, bare-bodied, with 2 axes as his weapons. A perfect villain, even for a B-grade film, Dale is definitely the most mature performer in this ensemble cast.

The script begins well, but loses logic along the way. The smaller stories leading up to the climax do not seem to fit together. To give the makers their due, the set design remains true to the video game, as do the costumes. The music is loud and jarring, as is appropriate for video games.

If you still want to watch Tekken, do so for the fight sequences, and leave your kids, your date, and your expectations, at home.
Share. Save. Connect.
Tweet
TEKKEN (HINDI) SNAPSHOT

ADVERTISEMENT
This page was tagged for
takeen game in movie download hindi
tekken 7 full movie in hindi
tekken 7 full movie in hindi download
Tekken movie download in Hindi
tekken 1 movie in hindi
Follow @fullhyderabad
Follow fullhyd.com on
About Hyderabad
The Hyderabad Community
Improve fullhyd.com
More
Our Other Local Guides
Our other sites
© Copyright 1999-2009 LRR Technologies (Hyderabad), Pvt Ltd. All rights reserved. fullhyd, fullhyderabad, Welcome To The Neighbourhood are trademarks of LRR Technologies (Hyderabad) Pvt Ltd. The textual, graphic, audio and audiovisual material in this site is protected by copyright law. You may not copy, distribute, or use this material except as necessary for your personal, non-commercial use. Any trademarks are the properties of their respective owners. More on Hyderabad, India. Jobs in Hyderabad.