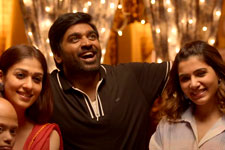 Aditya Devulapally / fullhyd.com
EDITOR RATING
6.0
Performances
Script
Music/Soundtrack
Visuals
6.0
5.0
6.0
6.0
Suggestions
Can watch again
No
Good for kids
No
Good for dates
Yes
Wait for OTT
Yes
Is this a romcom? Not really!

Is this a relationship drama? Not really!

Is this an enlightening exploration of polyamory and dualism? Not really!

Is this even a good watch? Well, let's talk about that.

Two women catfighting for a man is already a dead sub-genre. And what's deadlier is when someone tackles it with the intellect of a 10th-grade male student who just came across the incognito mode.

It gets even worse when a remarkable, deep actor like Vijay Sethupathi is reduced to a commercial hero who winks at both the women simultaneously. When you know and have experienced the cerebral phenomenon that is Sethupathi, it will personally affect you watching him do lacklustre films one after the other.

Rambo (Vijay Sethupathi) is an unlucky guy who is convinced he is the kiss of death, and is staying away from his mother to protect her from his jinx. Destiny entwines two gorgeous women, the traditional Kanmani (Nayanthara) and the modern Khatija (Samantha Ruth Prabhu), into his path making him fall in love with both of them. Does he manage to keep this love triangle stable?

Remember those classic polygamy comedies that every star used to attempt once in a while? Honestly, not a lot of those films have a shelf life any more. Probably because arm-twisting the naïve wife into accepting the husband's affair is not a plot point that entertains audiences now. If one still goes to watch an Intlo Illalu Vantintlo Priyuraalu (1996) or a Sathi Leelavathi (1995), is only because of the comedy. Only if the comedy lands does this genre stand a chance to survive the tsunami of the woke mindset.

And in that specific area, KRK barely does the job. Sure, there are a few laugh-out-loud moments, but there are also tongue-in-cheek scenes like when both the female leads - played by accomplished actors like Nayanthara and Samantha in case you forget - use innuendos of badaam and pista to talk about marriage and sex. That one joke is extended for 10 minutes of runtime till you regret that you laughed for the first two minutes.

And that's precisely the problem with the film's tawdry humour. Like a bunch of snotty backbenchers laughing at the same pun for a whole year, the film is just one joke running for more than two hours.

What's commendable is the unapologetic nature of the movie. No matter what, it remains firmly superficial. It's not a love story because there is not a single moment you feel the love between the main characters. They exist in the easy-going universe of choco-bar ice creams, rains and gentle piano.

Vijay Sethupathi has a special talent for playing a unique cynical protagonist who is somehow aware of the absurdity of the plot and still plays along with the directionless script. Take any of his movies that didn't amount to much, like Tughlaq Durbar, Kavan and Sangathamizhan, and when you observe keenly, you'll see the self-awareness of the character. He does the same act in this film with his dry wit and smug dialogue delivery.

Nayanthara and Samantha deliver what the plot needs - the typical loosu-ponnu character with the jealous spirit of the Indian wife who loves ranting. The movie also has cricketer Sreesanth in another lame attempt at comedy. The veteran Prabhu does his same hoodwinking antics and serves as an exposition device for the movie. And the casting of a kid with Down Syndrome for the exact role earns a brownie point for the filmmaker.

It's not that the movie completely disregards your rational centres - there are a few scenes that graze the arena of a mature relationship drama. Especially the scene where the three characters argue about the duality of love. But then, Vignesh Shivan happens. Shivan has a proven track record of being a commercial entertainer whose films exist in the space between a K-drama and a college student's short film about love. Sure enough, this is a film that acknowledges the ridiculousness of its plot and also makes sure to wink at its cringe areas assuring you that the makers knew what they were doing. So know what to expect, ignore the misleading scenes with promise, and you are bound to enjoy a cute romcom with Sethupathi, Samantha, Nayanthara and pleasant music from Anirudh.
Share. Save. Connect.
Tweet
KANMANI RAMBO KHATIJA SNAPSHOT 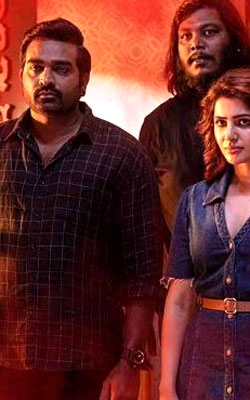 ADVERTISEMENT
This page was tagged for
Kanmani Rambo Khatija telugu movie
Kanmani Rambo Khatija reviews
release date
Vijay Sethupathi, Nayanthara
theatres list
Follow @fullhyderabad
Follow fullhyd.com on
About Hyderabad
The Hyderabad Community
Improve fullhyd.com
More
Our Other Local Guides
Our other sites
© Copyright 1999-2009 LRR Technologies (Hyderabad), Pvt Ltd. All rights reserved. fullhyd, fullhyderabad, Welcome To The Neighbourhood are trademarks of LRR Technologies (Hyderabad) Pvt Ltd. The textual, graphic, audio and audiovisual material in this site is protected by copyright law. You may not copy, distribute, or use this material except as necessary for your personal, non-commercial use. Any trademarks are the properties of their respective owners. More on Hyderabad, India. Jobs in Hyderabad.