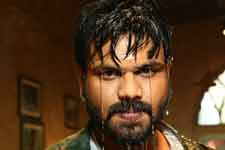 Ravi Kandala / fullhyd.com
EDITOR RATING
2.0
Performances
Script
Music/Soundtrack
Visuals
3.0
1.0
2.0
5.0
Suggestions
Can watch again
No
Good for kids
No
Good for dates
No
Wait to rent it
No
Ramgopal Varma is an atheist. He's made it amply clear through all media possible. But if anyone ever built a shrine with a copy of Godfather in place of God's idol, RGV would probably be the head priest there. He's made so many versions of that movie that you keep hoping he will run out of ideas for another spin on it or at least of actors who will agree to act in the same story again. And our hopes continue to get dashed.

RGV somehow finds favor with one filmy family or the other. Up North, it was the Bachchan family. He made Sr. Bachchan play Don Corleone and Jr. Bachchan play Michael Corleone and made two movies based on Godfather. He then made a few movies with Jr. Bachchan, none of which worked. Once he moved down South, it was the Mohan Babu family. He made a movie with Lakshmi Manchu, a few movies with Vishnu Manchu, another Godfather spinoff with Mohan Babu playing the patriarch, and, as a final bow, he's now made a film with the younger brother Manoj.

The script is the same. The film revolves around an extra-judicial authority - Gururaj (Prakash Raj), who's given up his unlawful ways and is trying to lead a normal life as a businessman - and his three sons - the hotheaded Kali (Jagapati Babu), the wastrel Bhupi (Naveen Vadde) and the educated Radhakrishna (Manoj) who wants nothing to do with the "business". When Guru is murdered brutally, Kali decides to take revenge, but he too falls to the enemy. While the wastrel decides to compromise, the silent one decides it is time to turn violent. How Michael Corleone aka Radhakrishna takes revenge on the people who killed Don Corleone aka Gururaj forms the rest of the plot.

It is amazing to see how Varma still finds people to invest in the same plot. Attack does not even bother to masquerade like it is not a freemake of Godfather. When Gururaj is killed, everyone around him talks about Balaraju, a faithful follower who will definitely react in a very violent manner if he finds out about Guru's death. He's referred to as a person who single-handedly killed eight people involved in a plot on Guru's life. Anyone who's read Godfather knows that is a dead giveaway that this character is Luca Brasi, the bodyguard who the Don himself feared. Most of the final killings happen simultaneously while the main lead is getting married.

Attack, however, is no Godfather. The film has a predictable plot, a boring screenplay and acting which is below par even by the lowest standards. Varma also displays his usual penchant for loud background scores and using religious chants as part of it, and the audience's eardrums are constantly assaulted by shouts of Attack Attaaacckkk...

It is also amazing to see how Varma can find actors who've failed at their acting careers and give them roles that will push them further into oblivion. Take Naveen Vadde for example. The only hit film in his career was Pelli - he was never known for his acting skills to begin with, and his shortlived career is proof of that. Varma brings him back, and his voice can make some want to strangle him. Surabhi, the golden girl from Dhanush's VIP, plays Radhakrishna's girlfriend. Whenever she comes on screen, you want to tell her "Beti, tumse na ho paayega". Manoj looks twice his usual size and is quite ungainly in the action sequences, especially when he's being chased or when he has all his jowls quaking after delivering a punch. The rest of the supporting cast do what's expected of them.

There are times when you heave a sigh of relief when you see that a movie is just 107 minutes long. When it is a Varma movie you're watching, you know that it means 107 painfully unbearable minutes. Attack will disappear into oblivion soon. You stay away.
Share. Save. Connect.
Tweet
ATTACK SNAPSHOT 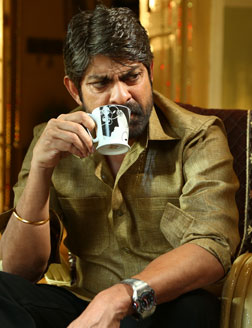 ADVERTISEMENT
This page was tagged for
Attack telugu movie
Attack reviews
release date
Manoj Manchu, Jagapathi Babu
theatres list
Follow @fullhyderabad
Follow fullhyd.com on
About Hyderabad
The Hyderabad Community
Improve fullhyd.com
More
Our Other Local Guides
Our other sites
© Copyright 1999-2009 LRR Technologies (Hyderabad), Pvt Ltd. All rights reserved. fullhyd, fullhyderabad, Welcome To The Neighbourhood are trademarks of LRR Technologies (Hyderabad) Pvt Ltd. The textual, graphic, audio and audiovisual material in this site is protected by copyright law. You may not copy, distribute, or use this material except as necessary for your personal, non-commercial use. Any trademarks are the properties of their respective owners. More on Hyderabad, India. Jobs in Hyderabad.