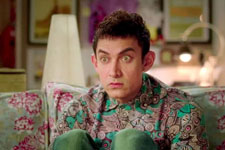 Nupur Barua / fullhyd.com
EDITOR RATING
8.0
Performances
Script
Music/Soundtrack
Visuals
9.0
8.0
5.0
8.0
Suggestions
Can watch again
Yes
Good for kids
No
Good for dates
Yes
Wait for OTT
No
Indian films and science fiction have somehow been incompatible all this while, unless, of course, you consider the Krrish series. Our literature lacks a Ray Bradbury and an Isaac Asimov, and the little we do have reeks of amateurishness. The reason is simple - our writers have not been able to grasp the essence of such fiction. And then along comes Rajkumar (Raju) Hirani, who, with his genius and profound understanding of fiction, marries the genre with a social message, and we get a delightfully quirky movie - PK, earlier known as Peekay.

PK (Aamir Khan) does not have a name. In fact, he has neither clothes nor a permanent address (at least, not on this planet), and no spoken language. His rather inane questions earn him the name - as a synonym of drunkenly stupid - and that is what he goes by. A trickster steals his rather fancy "return ticket", also referred to as his "remote control", and PK is in desperate search of the same.

This mission proves to be a problem, since, as mentioned above, he is naked, speechless and nameless, and stuck in the back of the beyond of Rajasthan. Then he runs into Bhairav Singh (Sanjay Dutt) - or rather, Bhairav Singh runs into him, literally. The simple wedding musician takes pity on PK, and teaches him a few worldly lessons, including a visit to a Bhojpuri prostitute (from whom PK learns speech, and his love of paan), and then advises him to look for his precious treasure in Delhi. Thus, PK sets out for the Capital.

In another world, Jagat Janini a.k.a. Jaggu (Anushka Sharma) is a television production student in Belgium. A chance meeting with a romantic young man, Sarfaraz (Sushant Singh Rajput), leads to love. When her fanatically Hindu father (Parikshit Sahni) learns of this, and worse, that the young man is from Pakistan, he insists that she return home immediately. She rebels, but a misunderstanding leads her to give up on her love story and return to Delhi.

Six months later, she has a job in a news channel, and she lives alone, since her father is still upset with her. And then she meets this intriguing character named PK. His bizarre behaviour attracts her attention, and she decides that here is a story that she can follow up on. Sensing her sympathy, PK confides in her about his origins. At first, she is sceptical, of course, but she soon learns that the one thing PK does not do is lie. She then promises to help him find his way home.

To paraphrase famous author Ursula K LeGuin's words, science fiction need not be futuristic, nor apocalyptic. It just needs to be relatable, and half the battle is won. Which is what Raju Hirani has done. The time the movie is set in is now, today, the 21st century India. Despite the continuous technological updates in our lives, we still hang on to age-old beliefs and superstitions. And this is Hirani's contention - that we may have evolved in every other sense of the word, but we have not yet learned how to live in harmony. And the root cause is religion, of course. It takes an alien being to make us realise how silly it all is.

Hirani bashes all religious practices with equal vigour, but he has a particular bone to pick with Hindusim, of course, since the most asinine, self-proclaimed prophets propagate a commercially viable sentiment. PK does not believe that these men are at fault, however. He lays the blame on a "wrong connection", because he cannot comprehend how men can be deliberately evil, or even immoral.

This is a Hirani trademark - the idiot savant, and not the intellectual, delivers us from evil (remember the Munnabhai series, or even 3 Idiots?). This is Hirani questioning the social beliefs that we blindly emulate in our daily lives, and never question. He reiterates, through PK, the fact that none of us was stamped or branded when we were born, for any religious proclivity, but somehow, any judgement on us is based on our names and our religions.

Hirani also weaves in a love story, as well as family relationships and friendships in the movie. This makes the second half slightly tedious, because all loose ends have to be tied up, and that takes time. It is also slightly distracting to have to deviate from the interest that you have invested in PK's story to really care about whether Jaggu finds her happiness in life vis-à-vis her father and her boyfriend. All the other plot points seem convoluted.

The dialogues are heavy-hitting, mostly because they are delivered with a wry sense of humour. The simplistic nature of PK's questions and his solutions are certain to make you think over things long after the movie is over. His confusion is made apparent when he asks why holy men and the like, whom he calls managers of different companies (or religions), have the right to tell us what to think and how to behave.

This movie is all about Aamir Khan, of course. He steals the show, and that is an understatement. He is sincere in his portrayal, and has to be the most convincing non-human ever. There are times when you may not understand why he is so serious, but it is commendable that Aamir Khan took the risk of playing this part. Anybody else would have looked ridiculous. He is extremely comfortable making a fool of himself, and this movie may just remind you why he is considered one of our finest commercial actors.

Anushka Sharma is peppy and bright, and does justice to her role. However, she is largely overshadowed by her co-star, and also seems a bit uncomfortable at times. She is at her best in the scenes without Aamir Khan present. Everybody else in this film is in an extended cameo. Sushant Singh Rajput is charming, and you wish he were around present longer. The other Raju Hirani regulars, including Saurabh Shukla, Parikshit Sahni and Boman Irani, deserved meatier roles, given that their performances are very effective to the story. Sanjay Dutt is a delight, and has some of the best dialogues in the movie (look out for the one in which he connects sex with memory loss).

The film is set in Rajasthan and Delhi mostly, and the production design is surreal, like in most Hirani films, yet realistic. The colour scheme in Rajasthan is a bit OTT, but the sets in Delhi make up for it. It is a world you know, yet you do not, thus making the movie a very effective fantasy of sorts. The story lends itself to the dichotomy that exists in India, and the production design complements it perfectly.

The costumes, on the other hand, are just short of bizarre, especially for Aamir Khan, but then again, it is perhaps a deliberate move to keep you from relating too closely to the characters.

The music, relatively, is a disappointment. Some of the songs are enough to make you tap your feet, but they are immediately forgettable. The special effects, kept to a minimal (given that this is a fantasy), and the camera work bring alive a world that you know and recognise, but cannot quite place. The screenplay's meandering plot points make editing a tough job, and the film may seem slightly lengthy.

A movie with a message - one would not expect less from Rajkumar Hirani, of course - PK is worth a watch, and maybe even two (especially the first half). It is a perfect film to end the year with, and to make you include humanitarian improvements in your New Year resolution list. Watch it also for the end - the surprise cameo of yet another actor makes you wonder if a sequel is due, and you hope there is.

In the words of PK, get rid of the wrong connections - the planet deserves better.
Share. Save. Connect.
Tweet
PK (PEEKAY) SNAPSHOT 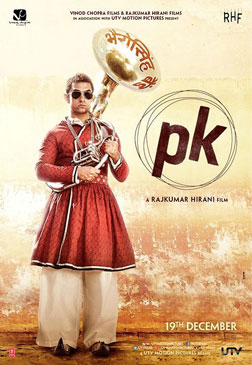 ADVERTISEMENT
This page was tagged for
peekpaysexfilem
PK (Peekay) hindi movie
PK (Peekay) reviews
release date
Aamir Khan, Anushka Sharma
Follow @fullhyderabad
Follow fullhyd.com on
About Hyderabad
The Hyderabad Community
Improve fullhyd.com
More
Our Other Local Guides
Our other sites
© Copyright 1999-2009 LRR Technologies (Hyderabad), Pvt Ltd. All rights reserved. fullhyd, fullhyderabad, Welcome To The Neighbourhood are trademarks of LRR Technologies (Hyderabad) Pvt Ltd. The textual, graphic, audio and audiovisual material in this site is protected by copyright law. You may not copy, distribute, or use this material except as necessary for your personal, non-commercial use. Any trademarks are the properties of their respective owners. More on Hyderabad, India. Jobs in Hyderabad.