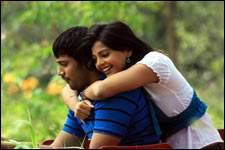 Deepa Garimella / fullhyd.com
EDITOR RATING
2.0
Performances
Script
Music/Soundtrack
Visuals
5.0
2.0
4.0
4.0
Suggestions
Can watch again
No
Good for kids
No
Good for dates
No
Wait to rent it
No
Chapter 6 is such a raving psychotic movie it feels like peering into a mind that's decaying with bitterness and spite against whatever it can think of at random. This is not to say the film hasn't tried being good - indeed, it isn't a stupid, wholly unintelligent flick. However, its negatives outweigh its positives so much it's not funny if you're even contemplating watching it.

The theme of the flick, firstly, is vague until the last 10 minutes. The proceedings start off with a girl Shilpa (Sonia Suri) finding out that she's pregnant. When she's portrayed as having made the discovery not through a retching session but by way of a pregnancy test, you're almost heaving a sigh of relief that this isn't going entirely into the sewer. However, you find yourself catching your breath pretty soon, as her flashback unfolds.

After unleashing on us a love story that is inane enough to make a box of rocks seem emotionally intense, we're told that her Police Commissioner father has arranged her engagement with a random guy without even asking for her permission.

Then, we're shifted to the case of Satyabhama (Kalyani), an orphan whose best friend commits suicide because she was dragged into the drug mafia. When Satyabhama's efforts get the culprits, who include a policeman, into jail, they swear revenge on her.

She moves to Vizag, where she rents a room in the bungalow of a gentleman (Kota Srinivasa Rao) who is trying to get his ageing son Satyamurthy (Harnath) married. The old man plays Cupid for a while, after which the two get married.

In the rest of the film, the makers get the two stories cross paths with each other, and choose to use as much mind-numbing gore as they possibly can. The violence is more moronically evil than frightening. The goon in this movie kills one of his inefficient henchmen by forcing him to smoke cigarettes till he dies, and another one by stuffing him with food till he dies. A policeman-policewoman duo find much mirth in kicking around an innocent pregnant woman in the name of enquiry, and hurling her against a nail on the wall.

In between, though, there are the mildly interesting parts, namely, where Kota Srinivasa Rao and Kalyani make their presence felt. Despite the faint potential that the Satyabhama-Satyamoorthy story has, the writers feel compelled to make the maniacal villainy the centre of the whole film, and it is exactly the memory you carry out of the experience.

The songs are okay, but we doubt that makea a difference. A mixed Tamil-Telugu cast makes this a confusing experience, so it is especially refreshing to have a few familiar faces - Kota and Kalyani included - around. MS and Dharmavarapu are in some blah comedy, and like every other face in the movie, are under-utilized.

Basically, Chapter 6 is a weird film that must ideally be told to look within and see what's wrong. It's getting no help from audiences anyway.
Share. Save. Connect.
Tweet
CHAPTER 6 SNAPSHOT

ADVERTISEMENT
This page was tagged for
Chapter 6 telugu movie
Chapter 6 reviews
release date
Kalyani, Harnath Policherla
theatres list
Follow @fullhyderabad
Follow fullhyd.com on
About Hyderabad
The Hyderabad Community
Improve fullhyd.com
More
Our Other Local Guides
Our other sites
© Copyright 1999-2009 LRR Technologies (Hyderabad), Pvt Ltd. All rights reserved. fullhyd, fullhyderabad, Welcome To The Neighbourhood are trademarks of LRR Technologies (Hyderabad) Pvt Ltd. The textual, graphic, audio and audiovisual material in this site is protected by copyright law. You may not copy, distribute, or use this material except as necessary for your personal, non-commercial use. Any trademarks are the properties of their respective owners. More on Hyderabad, India. Jobs in Hyderabad.