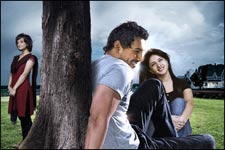 Deepa Garimella / fullhyd.com
EDITOR RATING
2.5
Performances
Script
Music/Soundtrack
Visuals
4.0
3.0
6.0
7.0
Suggestions
Can watch again
No
Good for kids
Yes
Good for dates
Yes
Wait to rent it
Yes
Very few movie makers can hope to be coherent about death and suffering. You can populate your film with all the stark-yet-serene sick rooms of the world, you can get people like Girish Karnad to mouth whatever you consider philosophy, and you can take the help of abstract symbolism; but unless you're a Hrishikesh Mukherjee, you have to work hard - and smart, really - to match up with the sheer sweetness of an Anand (a movie that Aashayein makes a lengthy reference to).

Why we can safely say that Aashayein goes wrong in its very choice of theme is that it's not in the league of films that can pull it off well. The movie thinks it's upto something extraordinary when it clearly is not, and the way the film struggles to seem arty and deep is among its key weaknesses.

So Rahul (John Abraham) discovers he has lung cancer, and packs up and leaves the girl (Sonal Sehgal) he has just proposed marriage to, to a rest home for the terminally ill. Inmates there include an old man (Girish Karnad) who can't stop being bitter about his ungrateful children, an AIDS victim (Farida Jalal - as an ex-prostitute?), a young boy Govinda (Ashwin Chitale) with supposed psychic powers, and a spitfire of a cancer patient Padma (Anaitha Nair).

Life's lessons keep tumbling in, with the relationships he develops with each of these people, particularly Padma. Kukunoor uses the whole ashram setting to drop in plenty of philosophy about life and death.

Aashayein is essentially a collection of little, ill-formed vignettes that want to say a lot but don't have much substance. Each scene, each frame is a forced attempt at appearing perceptives, including plenty of amateurish dialogues, but the insights that ultimately come up are pretty elementary.

The caring home is pretty to look at and the inmates there seem at peace with the half-life they have, and yet, the whole movie has the exact depth of a school play. Kukunoor seems to be content with little nuances that would thrill a newbie filmmaker, and this is what is baffling.

People who want to be nice to the movie will tell you that the performances are powerful, but that would be an outrageous misinterpretation of what unfolds on screen. The problem isn't in the actors by themselves, as much as in the fact that the helmsman hasn't been able to extract decent performances from his cast.

John Abraham isn't skilled enough for a role like this, and some of his "intense" scenes dangerously veer towards being amusing. Nair is okay but a lot of her scenes - she plays a cantankerous and whimsical 17-year-old - seem contrived. Karnad and Farida Jalal feel like wrongly-used props whose main purpose was to lend depth to the flick, and are not a pleasure to watch at all.

The visuals are clean and pleasing, but there's a lack of earnestness in all the simplicity. The no-make-up look that everyone sports is again a prop to emphasize the fact that this is a Kukunoor product - there's nothing endearing about the homeliness of it at all.

Again, the music feels like any other Kukunoor film soundtrack, and while there isn't one tune you can take home with you, it is the soundtrack that feels more powerful than the flick itself.

In all, Aashayein is a lot of fuss over a lot of nothing. We wouldn't recommend it.
Share. Save. Connect.
Tweet
AASHAYEIN SNAPSHOT

See Aashayein full details
AASHAYEIN USER REVIEWS
1 - 1 OF 1 COMMENTS
POSITIVE  |  NEGATIVE |  NEWEST  |  OLDEST  |  MOST HELPFUL  |  LEAST HELPFUL
USER RATING
3.0
1 USER
Performances
Script
Music/Soundtrack
Visuals
3.0
3.0
2.0
3.0
Can watch again - No
Good for kids - No
Good for dates - No
Wait to rent it - No
gopalav5 on 28th Aug 2010, 10:25am | Permalink
AS RIGHTLY SAID BY THE REVIEWER ANOTHER HRISHIDA HAVE TO BE BORN TO MAKE FILM LIKE ANAND. IN ANAND RAJESH KHANNA WITH A TERMINAL DISEASE LAUGHS AND MAKES MERRY ON THE SCREEN WHEN THE SUPPORTING ACTORS CRY AND FEEL PITY FOR HIM INCLUDING THE AUDIENCE. IN AASHAYEIN JOHN ABRAHAM CRIES WHEN THE SUPPORTING ACTORS LAUGH AND MAKE MERRY INCLUDING THE AUDIENCE WHO ALSO LAUGHS AND FEELS PITY OF NAGESH KUKUNOOR.

ADVERTISEMENT
This page was tagged for
Aashayein hindi movie
Aashayein reviews
release date
John Abraham, Anaitha Nair
theatres list
Follow @fullhyderabad
Follow fullhyd.com on
About Hyderabad
The Hyderabad Community
Improve fullhyd.com
More
Our Other Local Guides
Our other sites
© Copyright 1999-2009 LRR Technologies (Hyderabad), Pvt Ltd. All rights reserved. fullhyd, fullhyderabad, Welcome To The Neighbourhood are trademarks of LRR Technologies (Hyderabad) Pvt Ltd. The textual, graphic, audio and audiovisual material in this site is protected by copyright law. You may not copy, distribute, or use this material except as necessary for your personal, non-commercial use. Any trademarks are the properties of their respective owners. More on Hyderabad, India. Jobs in Hyderabad.