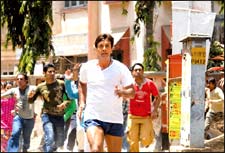 Deepa Garimella / fullhyd.com
EDITOR RATING
1.0
Performances
Script
Music/Soundtrack
Visuals
3.0
1.0
4.0
6.0
Suggestions
Can watch again
No
Good for kids
No
Good for dates
No
Wait to rent it
No
We could call Hello Darling dumb, cheap, lame, vulgar and offensive, but we'll stick to one word - hideous. In a movie whose high point is a boss' name plate that reads Harddick, it's easy to expect that very little will go right, and you're not proved wrong.

Javed Jaffrey plays this badly-written character Hardik, a sleazy boss whose advances on his female colleagues lie somewhere between obnoxious and plain disgusting. He tramples all over Mansi's (Gul Panag) career ambitions, hints to newbie Satvati (Isha Koppikar) that she must sleep with him if she's to be approved of, and broadcasts his extra-marital romps with secretary Candy (Celina Jaitley) all over office.

His wife Purvi (Divya Dutta) is an airhead who couldn't see through her husband's adventures until the neighbourhood maidservants' gang raises a hue and cry with her. She attempts to set him right by complaining to a Pati Sudharak Samiti. Her plans coincide with the office ladies' plot to teach their boorish boss a lesson.

A lot of chaos was intended, but since this is no Govinda flick, nor an Akshay Kumar caper, nor a Priyadarshan product, the film doesn't adhere to even basic standards of humour and IQ. The crudeness of the boss-employee dynamics apart, the women in this movie are made to seem dumber than a box of hair, and nothing they do seems bad enough - it just gets worse by the minute.

Logic is fatally torn apart. And like we said, the idiocy never seems to peak. Whether it's the scenes in which the trio smuggles a corpse out of hospital thinking it's Hardik's, or the conversations they generally have amongst themselves throughout the movie, the movie reeks of mind-numbing incapacity on the part of the writing.

Javed Jaffrey can't even take charge of the proceedings, given how empty the writing is. There might have been scope for him to do what he's good at, but a limp set of gags takes all the fun out of expecting anything from the man.

The women are a disaster, to say the least. Bad acting coupled with dim-witted lines and jokes is not getting compensated by all the suggestive clothing the characters wear to work, and it's a pity the movie relies more on the girls than on the comedian in the centre of it all.

Chunky Pandey plays Candy's boyfriend, stuck in a far-from-funny situation. His being an accessory to the script isn't even entertaining, because he's relentlessly beaten up for no reason by the afore-mentioned Pati Sudharak Samiti.

A couple of irrelevant songs for the bathroom breaks complete the picture, but if you're aiming at avoiding this movie, we think you should start at the ticket counter.
Share. Save. Connect.
Tweet
HELLO DARLING SNAPSHOT

ADVERTISEMENT
This page was tagged for
Hello Darling hindi movie
Hello Darling reviews
release date
Javed Jaffrey, Divya Dutta
theatres list
Follow @fullhyderabad
Follow fullhyd.com on
About Hyderabad
The Hyderabad Community
Improve fullhyd.com
More
Our Other Local Guides
Our other sites
© Copyright 1999-2009 LRR Technologies (Hyderabad), Pvt Ltd. All rights reserved. fullhyd, fullhyderabad, Welcome To The Neighbourhood are trademarks of LRR Technologies (Hyderabad) Pvt Ltd. The textual, graphic, audio and audiovisual material in this site is protected by copyright law. You may not copy, distribute, or use this material except as necessary for your personal, non-commercial use. Any trademarks are the properties of their respective owners. More on Hyderabad, India. Jobs in Hyderabad.