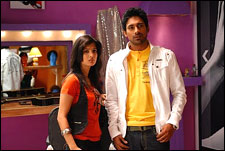 Deepa Garimella / fullhyd.com
EDITOR RATING
2.0
Performances
Script
Music/Soundtrack
Visuals
3.0
2.0
4.0
6.0
Suggestions
Can watch again
No
Good for kids
No
Good for dates
No
Wait to rent it
Yes
There seems to be no dearth of outrageous ideas in the market, and of visionaries who imagine they can be executed for the benefit of audiences. Happy Happy Ga is one of those half-baked teen movies that don't seem to have been articulated decently even when at the stage of being thought up.

Santosh (Varun Sandesh), we are told, is a cheerful young man with a penchant for love and girls. One day he falls in love with Pooja (Vega), but discovers that she's not very encouraging of the concept of relationships since her parents' divorce left her shattered as a child.

Santosh hatches an ingenious plan to woo her. He thinks that if he tells her he has a dream-girl, and if he keeps telling Pooja how much he loves her (the dream-girl), Pooja will eventually be drawn to him. A plus-sized diary of love letters that he gives her is part of the scheme.

The plan bombards when a ridiculous mix-up causes Pooja to think that Priya (Saranya Mohan), a total stranger she sees in a temple, is the one Santosh loves. She goes up to Priya and conveys the needful, which results in Priya wanting to see her "secret lover" and his letters.

Priya falls in love with him now. Matters get worse when it is found out that Priya is the sister of the local don Suri (Saikumar). And with Pooja, too, realizing that she is in love, this turns into a wholly avoidable mess.

Needless to say, logic and romance both take a beating in this woolly-headed movie. There's no way the flick could have been rounded up into anything remotely watchable unless there had been someone watching over what was being written. There is zero depth in the plot, and in addition, the dialogues are a mix of madly-made puns and sheer silliness.

The amateurishness of the film floods into the acting department like nobody's business. Where a more honest set of actors could have made the ordeal tolerable, we have a trio of rookies who don't really get what is to be delivered. Varun Sandesh grates with everything he's got and more, and Vega has some lousy dubbing spoiling the show for her. As for Saranya, she just looks misguided.

So when Ali zealously takes off on his own trip in the "revenge-on-Santosh" comedy track, it is the only respite you keep having throughout the entire movie. However, an unkempt Saikumar for a villain is no work of art, especially since the actor seems to have slept through the role.

Mani Sarma turns in a couple of hummable numbers, but the rest are a set of unwarranted ways to lengthen the movie.

Well, we couldn't think of any reasons to recommend this movie, and we don't think anyone should be trying.
Share. Save. Connect.
Tweet
HAPPY HAPPY GA SNAPSHOT

ADVERTISEMENT
This page was tagged for
Happy Happy Ga telugu movie
Happy Happy Ga reviews
release date
Varun Sandesh, Vega
theatres list
Follow @fullhyderabad
Follow fullhyd.com on
About Hyderabad
The Hyderabad Community
Improve fullhyd.com
More
Our Other Local Guides
Our other sites
© Copyright 1999-2009 LRR Technologies (Hyderabad), Pvt Ltd. All rights reserved. fullhyd, fullhyderabad, Welcome To The Neighbourhood are trademarks of LRR Technologies (Hyderabad) Pvt Ltd. The textual, graphic, audio and audiovisual material in this site is protected by copyright law. You may not copy, distribute, or use this material except as necessary for your personal, non-commercial use. Any trademarks are the properties of their respective owners. More on Hyderabad, India. Jobs in Hyderabad.