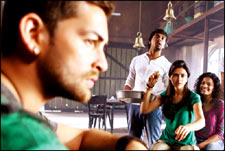 Deepa Garimella / fullhyd.com
EDITOR RATING
4.5
Performances
Script
Music/Soundtrack
Visuals
7.0
4.5
7.0
7.0
Suggestions
Can watch again
No
Good for kids
No
Good for dates
Yes
Wait for OTT
Yes
Quite often, Lafangey Parindey is a charming film. It is especially so if stories of the underdog are your thing. Let down by a tendency to over-simplify, and a lack of focus, this is a movie that might have worked if it had a clearer sense of purpose.

As central as it is to the flick, Lafangey's key plot twist is one of the places where it blows it. When the promos show a blind heroine, and the film opens with a heroine who is not blind, the impending disaster that you're expecting to handicap her makes the first act of the film a less-than-thrilling experience.

The rest of the flick is all about injecting back the hope, however, so you can't fault the film for not aiming at being a feel-good trip. The conveniently-handled story is what is slightly amusing, though.

When Pinky (Deepika Padukone), a dance skater with a single-minded ambition to make dance her "passport" to get out of her low-rent and shabby surroundings, gets blinded in an accident, the boxer One Shot Nandu (Neil Nitin Mukesh) takes it upon himself to get her back on track.

Nandu kick-boxes for a betting mastermind (Piyush Mishra), and is all set to be pulled into the world of hard-core gangster work. When Pinky suggests that quit the wrong side of the law and pair up with her to enter a dance reality TV show, things begin to change.

Well, the first thing you're thinking as Nandu picks up dance skating well enough to match steps with the incredible Pinky and astound a whole audience, is that Pinky has turned a kick-boxer into a sissy. Which is probably a more believable stunt the film pulls off than trying to convince us that it is easy to live being abruptly blinded at the prime of your life.

While Deepika does a fine job of convincing us that Pinky's gutsy enough to not let a cruel twist of fate throw water on the fire in her belly, it's tough to imagine what keeps happening on screen. What the film should have given more importance than the dance show and all the boxing is Pinky's personal journey. Nandu's coaching classes on fine-tuning the senses are somehow under-utilized - Pinky seems to pick up way too fast for you to relish the progress fully.

The initial parts of the flick make this seem like a gangster movie, which Lafangey is not; the parts soon after make this seem like a Chak De kind of drive, which it is not; and the parts after that show signs that this is a romance, which it really is. Plus, the police inspector in the background investigating Pinky's accident could have been more useful to the script.

Neil Nitin Mukesh doesn't need to act as much as Padukone, who, as we pointed out, is good. The pair is interesting, though.

Adding to all the eye candy, some astonishing dances and a rather sweet romance (impaired only by an inexpressive Neil) is some good music. Between some slick songs and a few lilting numbers, the soundtrack does its best to add to the film's watchability.

If you can't wait for a better release, Lafangey Parindey might actually be a decent bet in the meantime.
Share. Save. Connect.
Tweet
LAFANGEY PARINDEY SNAPSHOT

ADVERTISEMENT
This page was tagged for
Lafangey Parindey hindi movie
Lafangey Parindey reviews
release date
Neil Nitin Mukesh, Deepika Padukone
theatres list
Follow @fullhyderabad
Follow fullhyd.com on
About Hyderabad
The Hyderabad Community
Improve fullhyd.com
More
Our Other Local Guides
Our other sites
© Copyright 1999-2009 LRR Technologies (Hyderabad), Pvt Ltd. All rights reserved. fullhyd, fullhyderabad, Welcome To The Neighbourhood are trademarks of LRR Technologies (Hyderabad) Pvt Ltd. The textual, graphic, audio and audiovisual material in this site is protected by copyright law. You may not copy, distribute, or use this material except as necessary for your personal, non-commercial use. Any trademarks are the properties of their respective owners. More on Hyderabad, India. Jobs in Hyderabad.