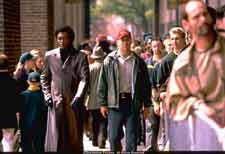 Feroz Hassan / fullhyd.com
EDITOR RATING
8.0
Performances
Script
Music/Soundtrack
Visuals
NA
NA
NA
NA
Suggestions
Can watch again
NA
Good for kids
NA
Good for dates
NA
Wait for OTT
NA
It's dark again, it's eerie, it's infested with ominous possibilities, and the audience sits with bated breath for the (k)night to take its course. Yes, it's 'Night' time once more! Manoj 'Night' Shyamalan, the knight in shining armor who has single-handedly brought back genuine drama to the horror/thriller genre, is back on the marquee. Before you venture to read the piece further, or jump out to buy a ticket to the movie, a note of caution: don't you ever think that you are watching The Sixth Sense, Part 2.

Just like in his last venture, Shyamalan endeavors to throw provoking questions at the audience. He continues to push the envelope of belief, reality, destiny and so on. The premise for this plot is drawn from the structure of comic books, which one Elijah Pierce (Sam Jackson) believes to be an exaggerated depiction of real life. The perennial 'good v/s evil', according to him, also involves the role of the vulnerable and the weak. He believes himself to be the extreme equivalent of the latter in real life. He has brittle bones (osteogenesis imperfecta), which make every move of his fraught with danger.

Before that there is David Dunn, the sole survivor of a train crash. Elijah believes him to be the diametrically opposite version of himself - 'the unbreakable', the hero. He cites his choice of profession - security guard at a stadium - as a proof of that. But Dunn was injured in an accident early in life. Elijah persists, much to the discomfiture of David. Now it's a question of belief in destiny. Do we have a set destiny that we must recognize and follow? And how is life minus the exaggeration of the comics?

The world has come a full circle for Hollywood and America, and Shyamalan is doing his bit in it. The premise of America's foundation - freewill - is now being challenged and, if the success of The Sixth Sense is any indication, people are willing to pick up the insinuations. The movie itself is very much along the lines of The Sixth Sense, but minus the horror elements. It is an evolved drama, and the supernatural elements happen to make it a thriller.

While in his last movie Shyamalan proceeded to cast a shadow with a final twist of the plot on everything that preceded it, the twist here only serves to show just another aspect of the plot. Something that may not go down well with the over-enthusiastic public! The fact is that the movie is full of subdued drama, though the emotions don't come out strongly. Shyamalan wouldn't be on the wrong foot if he allowed his actors to emote a little more. Willis, especially, could do with more energy in some scenes. Maybe that's the only failing of the movie. That and the news report about the 'superhero' that reflects the same exaggeration of the comic books. Blame it on the media, is it Shyamalan?

So now go for the movie, preferably more than once and, if you can help it, look for a theater with good projection!
Share. Save. Connect.
Tweet
UNBREAKABLE SNAPSHOT

ADVERTISEMENT
This page was tagged for
Unbreakable english movie
Unbreakable reviews
release date
Bruce Willis, Samuel L Jackson
theatres list
Follow @fullhyderabad
Follow fullhyd.com on
About Hyderabad
The Hyderabad Community
Improve fullhyd.com
More
Our Other Local Guides
Our other sites
© Copyright 1999-2009 LRR Technologies (Hyderabad), Pvt Ltd. All rights reserved. fullhyd, fullhyderabad, Welcome To The Neighbourhood are trademarks of LRR Technologies (Hyderabad) Pvt Ltd. The textual, graphic, audio and audiovisual material in this site is protected by copyright law. You may not copy, distribute, or use this material except as necessary for your personal, non-commercial use. Any trademarks are the properties of their respective owners. More on Hyderabad, India. Jobs in Hyderabad.