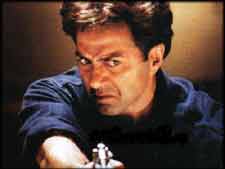 Avishek Gupta / fullhyd.com
EDITOR RATING
3.0
Performances
Script
Music/Soundtrack
Visuals
NA
NA
NA
NA
Suggestions
Can watch again
NA
Good for kids
NA
Good for dates
NA
Wait for OTT
NA
It is said that the way you begin your year is a clue to what to expect all the year through. Applied to Bollywood, this makes life looks bleak indeed. The first major release of the year is thoroughly spiritless.

A poor copy of the Mel Gibson starrer Lethal Weapon, this film is yet another honest-cop-versus-the-underworld saga, which lays emphasis on blood, bullets and blasts. Sunny Deol seems to have a copyright to these cop-roles - the regularity with which he dons them is making his movies look more like episodes of a television soap.

Farz is so predictable, you start wondering that if the storywriters of Bollywood are getting paid fat sums for this, then you are in the wrong profession, whatever it is. ACP Karan (Sunny) has a no holds barred approach, and is out to wash out crime and criminals from the city. His partner ACP Arjun Singh (Om Puri) just wants to retire peacefully. See, you're already wondering where you have seen it all before. Zinta, playing the daughter of the elder cop, is the flip of her father, and is enamoured of the fearless Karan. And there is the dreaded underworld don Gawa Firozi (Jackie Shroff) to complete the clichéd characterization.

What ensues, among big blasts and gory fistfights, seems like a rerun of Sunny's earlier movies. The rest of the story, if anything, inspires just a strong sense of déjà vu. Things do improve towards the second half, but again, the drama is stretched to such an extent that it tells on the patience of the viewer. Similar scenes, oft repeated dialogues, and, yes, the very same ending. Raj Kanwar is clearly not in form.

There is action incorporated in generous doses and, to be honest, the film does impresses in parts. But that's the best that can be said. The narrative is too hackneyed. And the music is uninspiring as well. Even the songs sound like remixes of ones you've heard earlier, and are dumped into the reels without a thought to their relevance to the proceedings. The only number that stands out is the one picturised on Pooja Batra - Bichua Bichua.

As for the stars, Sunny Deol is repeating himself in film after film. The muscle-flexing angry man clicked, and he's doing it to death. Preity Zinta doesn't get much scope in a male-dominated show. Om Puri is fine, as usual.

Like we said, the film scores in the action department (Tinu Verma). The stunts are well orchestrated, with a lot of money spent to achieve the desired impact. But all said and endured, this is just old wine packed in a new bottle.
Share. Save. Connect.
Tweet
FARZ SNAPSHOT

ADVERTISEMENT
This page was tagged for
farz sunny deol movie
Farz hindi movie
Farz reviews
release date
Sunny Deol, Preety Zinta
Follow @fullhyderabad
Follow fullhyd.com on
About Hyderabad
The Hyderabad Community
Improve fullhyd.com
More
Our Other Local Guides
Our other sites
© Copyright 1999-2009 LRR Technologies (Hyderabad), Pvt Ltd. All rights reserved. fullhyd, fullhyderabad, Welcome To The Neighbourhood are trademarks of LRR Technologies (Hyderabad) Pvt Ltd. The textual, graphic, audio and audiovisual material in this site is protected by copyright law. You may not copy, distribute, or use this material except as necessary for your personal, non-commercial use. Any trademarks are the properties of their respective owners. More on Hyderabad, India. Jobs in Hyderabad.