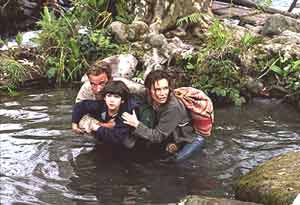 Smriti Kashyap / fullhyd.com
EDITOR RATING
5.0
Performances
Script
Music/Soundtrack
Visuals
NA
NA
NA
NA
Suggestions
Can watch again
NA
Good for kids
NA
Good for dates
NA
Wait for OTT
NA
Ol' Muscles from Brussels strikes again, and this time he's pissed as hell. "I-vill-a-be bak," he silently swears in a low murmur heard only to me, as he looks at all the damage wreaked by a Columbian terrorist attack on their embassy in the States. His poor wifey and kid get blown to kingdom come, as they happen to be in the wrong place at the wrong time - they're nothing much but 'Collateral Damage'.

Oh, whatever! The flick is as much fun as watching a large moldy sock. We all know that there is never a right time to be in the wrong place, and looks like the only collateral damage in the movie is the audience itself - wrong place, wrong time!
Share. Save. Connect.
Tweet
COLLATERAL DAMAGE (ENGLISH) SNAPSHOT

ADVERTISEMENT
This page was tagged for
Collateral Damage (English) english movie
Collateral Damage (English) reviews
release date
Arnold Schwarzenegger, Elias Koteas
theatres list
Follow @fullhyderabad
Follow fullhyd.com on
About Hyderabad
The Hyderabad Community
Improve fullhyd.com
More
Our Other Local Guides
Our other sites
© Copyright 1999-2009 LRR Technologies (Hyderabad), Pvt Ltd. All rights reserved. fullhyd, fullhyderabad, Welcome To The Neighbourhood are trademarks of LRR Technologies (Hyderabad) Pvt Ltd. The textual, graphic, audio and audiovisual material in this site is protected by copyright law. You may not copy, distribute, or use this material except as necessary for your personal, non-commercial use. Any trademarks are the properties of their respective owners. More on Hyderabad, India. Jobs in Hyderabad.