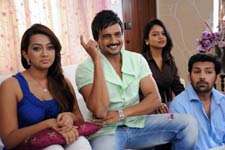 Ravi Kandala / fullhyd.com
EDITOR RATING
3.0
Performances
Script
Music/Soundtrack
Visuals
4.0
2.0
4.0
5.0
Suggestions
Can watch again
No
Good for kids
No
Good for dates
No
Wait for OTT
No
Sometimes, it would serve you well to accept that you're lost. Because once you accept it, you can sit back and take a long hard look at where exactly you fell off the train. And once you figure that out, you can try to get your life back on track. Or at least try and make a good attempt at it.

However, if you decide to keep going at breakneck speed without acknowledging the fact, you will crash with a resounding thud. And if you pick yourself up time and again, and keep doing the same thing, you will crash again and again.

Director Teja is currently doing this. He keeps delivering dud after dud after dud, without ever pausing to try and correct himself or even look at where he's going wrong.

1000 Abaddhaalu features another artist who falls in pretty much the same category - Sairam Shankar, director Puri Jagannadh's brother. However, this time around, Sairam seems to have taken one look at himself in the mirror and tried to remain honest to his self and his capabilities.

1000 Abaddhaalu is the story of Satya (Sairam Shankar), an employee of an ad agency who falls in love with Satya (Esther), who alternates between doing nothing at all and helping charitable organisations. Satya and his friends tell a zillion lies to get Satya to fall in love with Satya.

Finally, Satya gets married to Satya, but when Satya realizes that Satya had wooed her on the basis of lies, she gets divorced from him. How Satya manages to win back Satya's love is the remaining plot.

Confused and bored? Well, the movie is twice as confusing, and around 10.5 times as boring. Teja's script is lost in translation, and most of the movie that he's shot seems to have been chopped off on the editing table. A number of scenes in the second half barely make sense, given this merciless editing, and following the plot and numerous sub plots is exceedingly difficult.

The jerks in the screenplay are so evident that it almost seems like the editor walked out halfway through the movie. Added to it, awfully placed songs make it nearly impossible to sit through the movie. The music is decent, and Sairam Shankar dances well, but when you have two songs within the first half hour, it is kinda difficult to digest.

Teja really needs to sit back and take a look at what he's doing wrong time and again. A comedy of errors should not be difficult for the man to make, but when he's the one making the errors, the joke is on him.

Sairam Shankar, like we mentioned above, lets go of the mass hero illusions he has, and plays a regular guy next door. He does quite well, and his dances are also quite nice.

Esther looks good in certain angles, and thankfully has none of the screechiness that is a characteristic of Teja's leading ladies. She manages to pass muster in terms of her performance.

The best character in the movie is Tower Star ("fan of Power Star") played by NagaBabu. The man does amazingly well, and brings a modicum of respectability to his weird role.

The music is ok, with a couple songs actually passing the hummability barrier. Production values are good - a couple of songs are actually shot abroad.

1000 Abaddhaalu does not seem like a movie that will benefit from the fact that there are no big releases around. The reels of the movie lying on the editing table might have made a big difference to the final product, but with what it is now, there is only so much it can entertain.
Share. Save. Connect.
Tweet
1000 ABADDALU SNAPSHOT 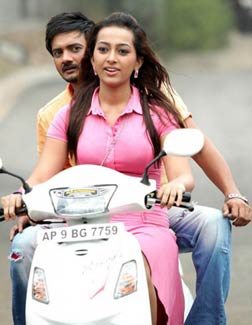 ADVERTISEMENT
This page was tagged for
1000 Abaddalu telugu movie
1000 Abaddalu reviews
release date
Sai Ram Shankar, Ester Noronha
theatres list
Follow @fullhyderabad
Follow fullhyd.com on
About Hyderabad
The Hyderabad Community
Improve fullhyd.com
More
Our Other Local Guides
Our other sites
© Copyright 1999-2009 LRR Technologies (Hyderabad), Pvt Ltd. All rights reserved. fullhyd, fullhyderabad, Welcome To The Neighbourhood are trademarks of LRR Technologies (Hyderabad) Pvt Ltd. The textual, graphic, audio and audiovisual material in this site is protected by copyright law. You may not copy, distribute, or use this material except as necessary for your personal, non-commercial use. Any trademarks are the properties of their respective owners. More on Hyderabad, India. Jobs in Hyderabad.