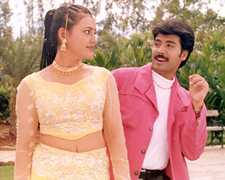 Smriti Kashyap / fullhyd.com
EDITOR RATING
1.0
Performances
Script
Music/Soundtrack
Visuals
NA
NA
NA
NA
Suggestions
Can watch again
NA
Good for kids
NA
Good for dates
NA
Wait for OTT
NA
Hawaii chappals and Tollywood heroes have the same life span - they really don't last that long. Bearing testimony to this theory is Akash - who comes crashing down like an orphaned meteorite that has been kicked out of the solar step-mother's way. Post Anandam, he sees little khushi in this release of his, and braces himself for a whole lotta ghum.

Everybody who wants to make a movie goes to college, and like baby donkeys made to carry a refrigerator, we are burdened with a whole bunch of inane classroom sequences and haha funny lines. The hero Balu (Akash) is a regular Mr. Sweetypants, the sorts who ask for extra answer sheets during exams and who actually say sorry when they 'dash' against a femme.

Anyway, he's flanked by a whole bunch of guys who I suppose are his pals. Balu, apart from acing his tests, spends a major part of his time daydreaming and spouting lines about the sort of girl he wants to marry and stuff. So for about 45 minutes into the flick, we keep hearing his idealistic dialogues about love, life and barf.

Waiting to cash into his heart is the heroine Aishwarya (Anupriya), who looks suspiciously blind. Anyway, she has the hots for him and wants to gush it out. But alas! Unlike her on-screen cronies, she can't summon her wits to go tell that guy about the way she feels. She figures (again) that a living dog is better than a dead lion, and shuts her trap. Carpet-hair Akash, on the other hand, is busy 'pelli-choopulu-fying' and trying to figure out what the hell is happening.

The flick is then sparingly peppered with songs, which unfortunately do not ring any bells of any shape or size. The movie crawls on all fours and has hajaar guys trying to arbiter a wedding between the hero and some nubile nymphet. Just like a city set on a hill can't be hidden for long, everybody's true feelings are soon revealed, and stuff happens.

What stuff? Hey, I just hand you the rat poison, what you do with it is legally out of my parameters! Anyway, I will tell you that the movie is dreadfully stodgy and puts you off to sleep in the first instant itself. The heroine, paapam, is 'ayyo paapam' material. Deserving special mention is her waist that looks like it's going to burst any moment now. Akash, on the other hand, seems to be pre-occupied with his crowning glory, his hair, which looks like a carpet of fuzzy caterpillars. The 'Kamedy' is okay, and sounds like a bunch of noisy gongs and clanging cymbals.

ADVERTISEMENT
This page was tagged for
Telugu neethocheppalani movie downloading com
hello premistara full telugu movie download movierulz
Telugu movie neetho cheppalani full HD full movie
Neetho Cheppalani telugu movie
Neetho Cheppalani reviews
Follow @fullhyderabad
Follow fullhyd.com on
About Hyderabad
The Hyderabad Community
Improve fullhyd.com
More
Our Other Local Guides
Our other sites
© Copyright 1999-2009 LRR Technologies (Hyderabad), Pvt Ltd. All rights reserved. fullhyd, fullhyderabad, Welcome To The Neighbourhood are trademarks of LRR Technologies (Hyderabad) Pvt Ltd. The textual, graphic, audio and audiovisual material in this site is protected by copyright law. You may not copy, distribute, or use this material except as necessary for your personal, non-commercial use. Any trademarks are the properties of their respective owners. More on Hyderabad, India. Jobs in Hyderabad.