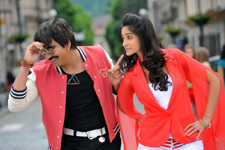 Deepa Garimella / fullhyd.com
EDITOR RATING
3.0
Performances
Script
Music/Soundtrack
Visuals
6.0
3.0
4.0
7.0
Suggestions
Can watch again
No
Good for kids
No
Good for dates
No
Wait to rent it
No
"Devudunnadani poorthiga nammi ee cinema choodandi..." starts off a note by the director of Devudu Chesina Manushulu, before the film begins. The irony is not lost out on us. But the joke sure is.

There's no way Puri Jagannath cannot be clued into how just how sucky Devudu Chesina Manushulu is. The movie is not only atrociously bad, it also looks like everyone in it was fully aware of the abomination that it is. This is simply the work of a man who had money and time on his hands, not to mention good friends to humour him as though he'd invited them to a long drive because he was bored.

Yeah, right - the story. In Vaikuntham, Lord Vishnu (Brahmanandam - !!) is telling his consort Lakshmi Devi (Kovai Sarla) a story that is taking place on earth, and the couple eventually fashion an alternative version, featuring the same actors. There - that's about the only splash of creativity this film offers. The rest plays out like a story-telling game with each player adding his own little twist unrelated to the plot itself.

Ravi Teja (Ravi Teja) and Ileana (Ileana) are orphans, each unaware of the other's existence, until a completely random guy Papayya (M S Narayana) drops a banana peel on the road. An elaborate chain of events transpires after someone slips on the peel, finally leading to Ravi Teja, a "settlement guy" (meaning - he is counted on to settle petty and non-petty disputes in non-petty ways), flying to Bangkok to meet the don Prakash Raj (Prakash Raj). There, Ravi Teja meets Ileana, a hot taxi driver, and the two fall in love before slapping each other and Ileana finally kicking Ravi Teja in his crotch.

Would the two have met if Papayya had, instead of flinging his banana peel on the road, dutifully thrown it in a dustbin?

Who exactly are we kidding here? Everyone knows this isn't experimental cinema territory, and that there can only be one ending that can be imagined. The onus, then, is on creating a plot that engages you despite how it is destined to end. In DCM, Story 1 and Story 2 compete with each other on lousiness. And Story 2 wins.

Each of them is basically the same old tired "macho good guy goes to Bangkok to settle things with goon wearing flowery silk shirts" that plays out in two minutely different versions, with not a single event/dialogue to keep you interested in either. It's not clear what Prakash Raj deals with, but the good news is that you don't care. The chases, the shootouts, the Thai culture - it's all been done to death. Exasperating songs and the stifling Bangkok locales only serve to render DCM more unwatchable than it is.

That Ileana is suitably gorgeous doesn't help. That the chemistry between her and Ravi Teja crackles doesn't help. The romance has been poorly - nay, awfully - crafted. In Story 2, Ravi Teja destroys her taxi in a shootout, moves in with her forcibly, and molests her, and this is supposed to endear him to her - and us?

Some quirky sequences here and there are mildly fun. Prakash Raj keeps having bouts of amnesia (because he had a knee surgery), and he launches into these comical tirades now and then. But then, this takes a turn for the worse when, in Story 2, he thinks Ileana is his long-lost sister, and the two end up weeping and crying out loud for each other after a point. All through this, you can see that Prakash Raj is aware of how ridiculous things are getting.

Watching Ravi Teja do exactly what he's been doing all these years isn't too kind on the senses. He needs a hit fast, but before that, needs a decent film. As for Ileana, Barfi had better be good. Prakash Raj makes sure he will not be missed for some time. Ali and his bad wig don't cheer us up. Subbaraju glares and fumes all through his role as a cop in the film, but to little effect. And what was with casting Brahmanandam and Kovai Sarla as the gods, when they aren't even being very comical? 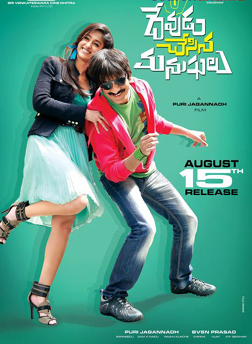 ADVERTISEMENT
This page was tagged for
Devudu Chesina Manushulu telugu movie
Devudu Chesina Manushulu reviews
release date
Ravi Teja, Ileana
theatres list
Follow @fullhyderabad
Follow fullhyd.com on
About Hyderabad
The Hyderabad Community
Improve fullhyd.com
More
Our Other Local Guides
Our other sites
© Copyright 1999-2009 LRR Technologies (Hyderabad), Pvt Ltd. All rights reserved. fullhyd, fullhyderabad, Welcome To The Neighbourhood are trademarks of LRR Technologies (Hyderabad) Pvt Ltd. The textual, graphic, audio and audiovisual material in this site is protected by copyright law. You may not copy, distribute, or use this material except as necessary for your personal, non-commercial use. Any trademarks are the properties of their respective owners. More on Hyderabad, India. Jobs in Hyderabad.