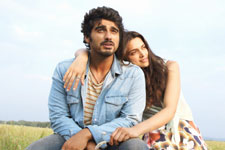 Nupur Barua / fullhyd.com
EDITOR RATING
7.0
Performances
Script
Music/Soundtrack
Visuals
8.0
7.0
6.0
8.0
Suggestions
Can watch again
Yes
Good for kids
No
Good for dates
Yes
Wait to rent it
No
The Delhi High Court, in all its wisdom, dismissed a PIL from a concerned mother who thought the word "fanny" would corrupt her children, and therefore wanted a ban on the title of Homi Adajania's latest film. Finding Fanny could easily be a double entendre, but you would have never thought of it till this PIL came along. But now, the fact that the movie spends a considerable length of time on Dimple Kapadia's prosthetic behind may just remind you of the PIL.

Finding Fanny, however, goes beyond all of that, and a few naughty dialogues here and there are well in keeping with the mood of the setting, as you must have already presumed by the quirkiness in the trailer. Angie (Deepika Padukone) is a young widow, whose husband (Ranveer Singh, in a cameo) died 15 minutes after she was married. She is now resigned to living with her mother-in-law Rosie (Dimple Kapadia), and life is uneventful for both.

Angie's best friend is Ferdie (Naseeruddin Shah), a postmaster in the sleepy Goan town of Pocolim. Ferdie discovers, suddenly, that the letter he had sent to the love of his life, Stephanie, or Fanny, almost 50 years ago, was never delivered. Distraught with the thought that Fanny never knew how much he loved her, Ferdie pours his heart out to Angie.

Angie is at first annoyed with Ferdie's constant whining and self-pity, but then she decides to help him out. She suggests that Ferdie go looking for her. Of course, he cannot go alone, but even Angie could not have predicted that the situation would call for a road trip of 5 absolutely unpredictable people, including Ferdie and herself. Savio (Arjun Kapoor), a mechanic, is the obvious choice to drive them around, and Rosie cannot be left behind. Tagging along is the lecherous Pedro (Pankaj Kapoor), who is fascinated by Rosie.

Once they are on the road, looking for Stephanie, they learn how to tolerate each other, barely, and how to apply life's lessons to their own selves instead of lecturing. Just when all of them think their lives are monotonous, they realise that there is always more to look forward to.

The story is not a great work of literature. In fact, it survives on the quirks of the caricaturish characters. Although there are multiple layers in the narration, the story that is conveyed to you is simple, and seems quite uncomplicated. In fact, those who look for deeper or more meaningful messages, will find them, and those who do not, will not. The screenplay is executed well, and the pace is almost predictable - so much so that you almost know what the end will be.

What sets the movie apart from other complacent scripts is the unpredictability of the characters. So, even when you know that situation A will lead to situation B, you are never quite sure how the characters will deal with either situation. Add to that the cheekiness and the irreverence in the dialogues and actions, and you have a film that warms the cockles of your heart.

Not that Finding Fanny is a comedy, per se. It falls somewhat in the category of a dark comedy, maybe, or even a satire, and there is no slapstick moment telling you to laugh. There is even a strain of melancholy and almost tragedy in the telling of the story, and you may find yourself feeling protective about the characters, even Pedro, the infamous lover of big women, who loves painting them. The plot is without twists and clever lines, but notice how each character is pitted against the other and how they are all extremes of each other.

Arjun Kapoor, with his constant pout, makes an excellent Savio - bewildered, lost, ill-tempered, a soft-hearted bully in a way. He is a treat to watch. Deepika Padukone, too, is confident of her abilities and talent, and gives the role her all. Her dialogue delivery seems monotonous sometimes, but her expressions and actions more than make up for that.

Naseeruddin Shah is a delight, too. A wide-eyed simpleton of sorts, his character comes alive when he is pitched against the slimy Pedro, played by Pankaj Kapoor. Together, these two actors take the movie to another level, and you have to watch their contrasting acts to know just how sublimely capable they are of hogging the limelight away from young, commercially successful actors.

And then there is Dimple Kapadia, Homi Adajania's lucky mascot. Her ability to mock herself as an artiste is apparent in her role as the irascible Rosie, and she is the most natural actor of the lot.

Goa as a setting has been done too many times for you to expect anything new, and this is where Adajania surprises you. The production design is fresh, and at the same time, nostalgic. Pocolim is a place that has access to the most modern technology, namely the Internet, but people here still live in the 1980s. The mentality and the attitude of its inhabitants are also obvious in their costumes, and in their general expressions and behaviour. This is done so subtly that you will be fully immersed in Pocolim before you realise that you are not actually present there physically but are watching it on a screen.

The camera work, for one, is not intrusive, despite the intimate and sometimes farcical scenes. The camera is you, and everything that unfolds on the big screen is exactly as you would see it. There are no fancy angles or movements, and like the story, it moves at its own pace. The editing is effective, but certain portions sometime after the interval appear slow and tedious. As for the music, it is already popular, and is in tune with the setting of Finding Fanny - not the best music you will hear this year, but very effective in conjuring up a certain atmosphere.

Although Finding Fanny is also releasing in Hindi, we suggest you watch the English version. The broken English with Pocolim's own colloquialism is charming, to put it mildly, and will ensure a constant grin on your face. The end, as mentioned, is a little predictable, and somewhat disappointing, but the entire movie is worth sitting through again, just to experience the road trip with those five characters. 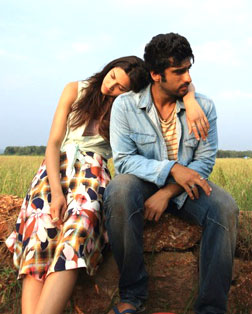 ADVERTISEMENT
This page was tagged for
Finding Fanny (Hindi) hindi movie
Finding Fanny (Hindi) reviews
release date
Arjun Kapoor, Deepika Padukone
theatres list
Follow @fullhyderabad
Follow fullhyd.com on
About Hyderabad
The Hyderabad Community
Improve fullhyd.com
More
Our Other Local Guides
Our other sites
© Copyright 1999-2009 LRR Technologies (Hyderabad), Pvt Ltd. All rights reserved. fullhyd, fullhyderabad, Welcome To The Neighbourhood are trademarks of LRR Technologies (Hyderabad) Pvt Ltd. The textual, graphic, audio and audiovisual material in this site is protected by copyright law. You may not copy, distribute, or use this material except as necessary for your personal, non-commercial use. Any trademarks are the properties of their respective owners. More on Hyderabad, India. Jobs in Hyderabad.