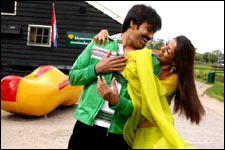 Deepa Garimella / fullhyd.com
EDITOR RATING
6.0
Performances
Script
Music/Soundtrack
Visuals
8.0
5.0
6.0
5.5
Suggestions
Can watch again
No
Good for kids
No
Good for dates
Yes
Wait to rent it
Yes
Anjaneyulu is like that little complimentary cricket bat that health drink companies give you - you're not going to sit and play with a bat that small, or even with one made of plastic, but you're going to keep it anyway because it has a photocopy of Sachin's signature on it. Little plastic bats sell because you like Sachin.

So when Ravi Teja's just broken someone's bones and left them jutting out of the poor guy's limbs, you know our man's coming up with one hell of a line in the next few seconds. And that's how you actually reach the end of Anjaneyulu. Which, by itself, is like a particularly bland dish that the chef was tight-fisted in adding even salt to, but which a dash of lemon manages to salvage, because it does the one thing it knows to do - bring the zing. Colourful lemon slices are what sell bland rajma.

In a no-brainer of a role, Ravi Teja plays Anjaneyulu, a regular-Joe-turned-society-cleanser whose humour the villains just can't seem to get. Anjaneyulu, who's employed at a local TV channel that's quite broke, is a guy whose life has progressed from being a school topper, to being an unshaven cad who's made it a point to make everything around town his business. Now technically he's a loser, but deep down we all know he's the real winner, and we all want to be like him - he's getting by in his job solely because he can talk. And how.

A gang of drunken lusting baddies drives the heroine, Anjali (Nayantara), into Anjaneyulu's arms late one night, and he pays back the favour by breaking the villains' limbs like they were cakes of Maggi from a freshly opened pack. When he asks Anjali for her phone number, she doesn't give it to him. Anjaneyulu learns a lesson, and the next time, when he wants her to love him, he makes sure he doesn't ask - he makes sure she falls in love with him.

But a couple of lovebirds don't make the city a happy place. A colleague of Anjaneyulu's is distraught at his failing efforts to bringing in 'real' journalism to their channel that's solely engaged in upping its TRPs. Added to this is local mobster Bada (Sonu Sood), who doesn't like people disagreeing with him, because he loves his bullets and wouldn't want to waste them on people who disagree with him. A frantic MLA (Jayaprakash Reddy), a nasty Home Minister, the threat of an exposÃ© looming large over their heads, and Bada's own issues with his rival (Kota Srinivasa Rao) - all lead to a mess that finally involves Anjaneyulu.

Anjaneyulu is a comic trip, and its first half is dedicated to the romance and the funnies, and is decently paced. Its second half slips into formula-zone, and the film doesn't realize that there's nothing very refreshing about a hero who's trying to teach the villains a lesson by killing all of them. That said, this is a film that doesn't let up on its comedy, making it an integral part of the rather painful stunts.

It's not that the uninspired script is a problem - Anjaneyulu has a presentation that's remarkably ordinary, for a production that's signed on an A-list star. The visuals are not slick, the foreign locales in the songs look as mundane as your street corner medical store, and the only spark the movie seems to bet its bottom dollar on is the presence of Ravi Teja. The traumatically messy fights and the way the film shows burn victims depict a complete lack of respect for people who've come to have some peace-loving unadulterated fun. And a complete lack of respect for the human body as well.

Ravi Teja is his usual electric self, and Nayantara is charming as his lady love. Brahmanandam and Jayaprakash Reddy are the key others who spur the train faster on this laugh-track. Sonu Sood is a pleasure to watch on screen, yet again, but like someone in the film quips, he needs a role with less scowl now. The rest of the cast is, needless to say, competent enough.

As for the music, the title song is catchy, and has enough attitude to make you think there's more coming. But other than the frenzied acoustic activity picturized on Kim Sharma, and the tear-jerker, both of which come in the end, there's nothing great.

All said and done, you can go for Anjaneyulu if you're going through one of those times when you badly need a hug - a few hours of chuckling is a decent substitute for one. And if it's a kid who needs a hug, give him or her one yourself.
Share. Save. Connect.
Tweet
ANJANEYULU SNAPSHOT

See Anjaneyulu full details
ANJANEYULU USER REVIEWS
1 - 3 OF 3 COMMENTS
POSITIVE  |  NEGATIVE |  NEWEST  |  OLDEST  |  MOST HELPFUL  |  LEAST HELPFUL
USER RATING
4.5
2 USERS
Performances
Script
Music/Soundtrack
Visuals
6.5
3.5
3.0
4.0
Can watch again - No
Good for kids - No
Good for dates - No
Wait to rent it - No
varam on 28th Aug 2009, 12:13pm | Permalink
6.0 by the reviewer is too much for this movie. I'll give only 3
Engolkar Kumar on 18th Aug 2009, 2:41pm | Permalink
If by any chance Ravi Teja happens to read this, I would like to ask one question. Why the hell does he do the same kind of role in all pictures? We are fed up of seeing him as awara, roudy, teasing heroines etc.
DSM on 31st May 2020, 9:32am | Permalink
eleven years down the line since then, he is still doing the same characters.....
Saradhi on 17th Aug 2009, 7:28am | Permalink
Chandaalam, daridram, neecham, you can use any number of words like this. Ilaanti cinemaa theesinanduku directorni chepputho kottaali. Janaalu eminaa gorrelu anukuntunnaaraa. First half chandaalam anukunte, second half ghoram. Nayanatara choosthe dokochindi. Asalu inkaa vulgargaa raayochu kaanee, andaru chadivithe baagodani raayatledu. Anavasaramgaa $40 kharchupetti maree choosaamu. Dayachesi choododdu.

ADVERTISEMENT
This page was tagged for
Anjaneyulu telugu movie
Anjaneyulu reviews
release date
Ravi Teja, Nayantara
theatres list
Follow @fullhyderabad
Follow fullhyd.com on
About Hyderabad
The Hyderabad Community
Improve fullhyd.com
More
Our Other Local Guides
Our other sites
© Copyright 1999-2009 LRR Technologies (Hyderabad), Pvt Ltd. All rights reserved. fullhyd, fullhyderabad, Welcome To The Neighbourhood are trademarks of LRR Technologies (Hyderabad) Pvt Ltd. The textual, graphic, audio and audiovisual material in this site is protected by copyright law. You may not copy, distribute, or use this material except as necessary for your personal, non-commercial use. Any trademarks are the properties of their respective owners. More on Hyderabad, India. Jobs in Hyderabad.