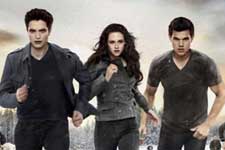 Kritika Deval / fullhyd.com
EDITOR RATING
5.0
Performances
Script
Music/Soundtrack
Visuals
5.0
4.0
6.0
8.0
Suggestions
Can watch again
No
Good for kids
Yes
Good for dates
Yes
Wait to rent it
Yes
Tall, Pond's-powder-white, and really really really wants to suck the blood out of you but stops himself only 'coz he loves you - God! How sexy is that? Or maybe that's just the kinda thing teenagers are into these days. It could also have something to do with the fact that the guy apparently has crystals embedded in his skin. Times are hard after all, what with the inflation and all that.

Well, whatever it is, watching this movie was actually quite difficult, not because it sucks (well, that's there, too), but because it was rather hard to hear the lines amidst the din of adolescent squeals and giggles and "OMG"s. Meyer sure hit the jackpot with that one, didn't she? She took the thousands of vampire bodice rippers (romance reader slang for books on which bosoms popping out of really tight corsets are on prominent display) out there, and figured, why should mommies have all the fun?

And hence, Twilight - the most thoroughly sissified rendition of some of the coolest fictional characters ever. In the Twilight world, you have "vegetarian" vampires instead of the whole three-bites-and-you're-a-vampire rule. Here, vampires don't burst into flames or die a painful death upon encountering sunlight. Instead, they sparkle, like that sparkly, shiny gown of the sparkly, shiny Barbie this writer used to play with.

And thus, she wrote four books about the life of Bella Swan, a rather boring person with a serious death wish, and Edward Cullen, a vampire who sees red, literally (the eyes of these blood-suckers go red when they're "thirsty"), every time he sets his eyes on her. And to make it more interesting, you have an equally drool-worthy werewolf, Jacob Black, dangling after the dull, whiny girl. The only thing that saved the books was the emotion, the character development, and the fact that you wanted to know what happened to those characters.

This, of course, gets completely lost in the movies, for which there are two reasons. The first is that the franchise concentrates way too much on the gloss than on the substance. The second is that Stewart and Pattinson only ever emote when they're about to do the dirty. As a matter of fact, they pretty much always look like they wanna do the dirty.

So, now we come to The Twilight Saga: Breaking Dawn - Part 2. Bella (Kristen Stewart) is finally what she feels she "was meant to be", a vampire. She wakes up from her two-week slumber, which is the time it takes for a mortal to be "turned", and finds herself stronger, faster, and the same temperature as her husband, Edward (Robert Pattinson). The two go hunting together, where Bella goes around trying really hard to look like a sexy vixen on the prowl (she even growls).

Once that is done with, she wants to meet her daughter Renesmee (remember the monster baby that Bella kept alive even while it was feeding on her?), who is growing up at the same alarming pace at which she did as a foetus. Renesmee also has a super power that allows her to be lazy. She can tell whatever she wants to say to a person by touching their face and "showing" them. Adding to the craziness is the fact that Jacob (Taylor Lautner) has "imprinted" on the baby, which is apparently how werewolves mate (it's a BABY, y'all! Stephanie Meyer, you really wanna bring up paedophilia?).

Everyone is more or less happy, but soon there's trouble in the paradise as an old enemy spots the little girl, and assumes that the latter is something called an immortal child, a type of monster babies that were converted before their mind was developed. So now it's the Cullens, werewolves, and Cullen's friends from all over the world, against the Volturi, which is kinda like a vampire monarchy. So, who will prevail? - will form the crux of the story.

Now, for the performances. The cast, frankly, looks bored, and does the job on auto pilot. You can't really blame them. We doubt it was fun running around after a girl who simply could not stay out of trouble. Thankfully for them, it's all finally over. Robert Pattinson is his usual cardboard-y self with three different settings for expressions. Scroll up for a rant on Kristen Stewart's performance. We have nothing more to say.

Taylor Lautner - there is something very wrong with the girls these days if all that hunkyness generates less excitement than the pale and broody Pattinson. Lautner also kicks Pattinson's ass when it comes to the acting. Mackenzie Foy as Renesmee is as adorable as she is disturbing. Billy Burke, who plays Charlie Swan, is at his perpetually discomfited best. Michael Sheen, as usual, has the most fun of them all as the head of the Volturi, Aro.

The setting and the visuals are as striking as ever, especially when vampire heads start getting ripped off in the awesome final battle that can very easily be this movie's saving grace. The music is broody and atmospheric and meant to create drama, the way just about everything in the movie is done. It is rather pleasant to walk out with Christina Perri's A Thousand Years ringing in your head. The soundtrack has probably already made its way to many an adolescent playlist. 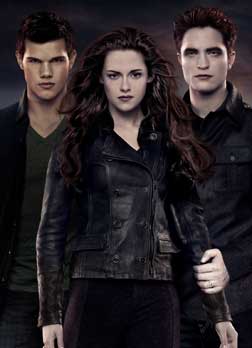 ADVERTISEMENT
This page was tagged for
The Twilight Saga: Breaking Dawn - Part 2 english movie
The Twilight Saga: Breaking Dawn - Part 2 reviews
release date
Kristen Stewart, Robert Pattinson
theatres list
Follow @fullhyderabad
Follow fullhyd.com on
About Hyderabad
The Hyderabad Community
Improve fullhyd.com
More
Our Other Local Guides
Our other sites
© Copyright 1999-2009 LRR Technologies (Hyderabad), Pvt Ltd. All rights reserved. fullhyd, fullhyderabad, Welcome To The Neighbourhood are trademarks of LRR Technologies (Hyderabad) Pvt Ltd. The textual, graphic, audio and audiovisual material in this site is protected by copyright law. You may not copy, distribute, or use this material except as necessary for your personal, non-commercial use. Any trademarks are the properties of their respective owners. More on Hyderabad, India. Jobs in Hyderabad.