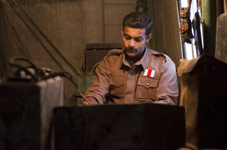 Ravi Kandala / fullhyd.com
EDITOR RATING
6.0
Performances
Script
Music/Soundtrack
Visuals
7.0
6.0
3.0
7.0
Suggestions
Can watch again
No
Good for kids
No
Good for dates
No
Wait to rent it
No
There are times when a film needs to be told in a non-linear mode. Basha, the predecessor to all our masala blockbusters, was one such movie where the passive first half was needed to give the post-interval flashback the kind of zing it carried. Director Surender Reddy especially employs the style beautifully, showing you an incident and then taking you back to how it happened, a few frames at a time.

And then there are certain movies which do best with a linear narration. Kanche, in this writer's opinion, is one of them. Unfortunately, director Krish seems to have thought otherwise.

Kanche starts off with Dupaati Haribabu (Varun Tej) reporting for duty in Italy in World War II. He is posted under commanding officer Eashwar Prasad (Niketan Dhir). Hardly a day later, even before the camp has settled fully, they are attacked by German troops - first by air and then by land. This leads to a big battle, and Haribabu's squad surrenders in the face of an incessant attack by the Germans. The German commander executes the remaining members of the Italian army, and takes Eashwar Prasad and the general as prisoners.

Haribabu and four others are left for dead, and see their commanders being whisked away. Haribabu and the remaining soldiers then decide to bring them back. The rest of the movie showcases the tumultuous past of Eashwar and Haribabu (who hail from the same village), Haribabu's love story with Princess Sita Devi (Pragnya Jaiswal), and the result of Haribabu's mission.

The major issue with Kanche is that the heavy duty scenes in the first half do not make much sense due to the fact that you are barely aware of any of the characters. The biggest battle sequence starts within ten minutes of the film taking off, and has absolutely no impact. Haribabu and Eashwar keep talking about how if one of them dies the other should carry the corpse back to the village, and how that will be good for the village - you have absolutely no context, and the dialogue makes just about as much sense as it did when you watched the trailer.

There are also attempts at humour but they barely pass muster. And the love story is too convenient - the leads worry when it is convenient for them and are happy when it is convenient. The villains raise caste issues when it suits them, cool down in a jiffy, and then flare up in another jiffy when the screenplay needs them to.

It is only in the second half of the second half that Kanche comes together. Once you realize that Krish is drawing parallels between the caste battle in the village and the holocaust, the conflicts in the film gain real meaning. However, Krish's attempts at including philosophy seem forced here, too - post-Gamyam, it almost seems like Krish believes he has to preach.

The film is shot beautifully - the war sequences are shown quite well and the contrast with the village atmosphere is brought out nicely. The music is a definite minus - a few of the background songs are nice, but the regular duets are given an unnecessary classical touch and are difficult to sit through.

Acting-wise, Varun Tej does quite well. His eyes speak for themselves and he has a strong voice - both these should augur well for him. Pragnya Jaiswal, like we mentioned earlier, has one expression, and Nikitan Dheer is also single-tone. Gollapudi Maruti Rao appears on screen after a while, and it is nice to see the veteran do very well in his role.

Kanche is a different attempt and a brave one - what keep it afloat are the WW-II sequences, and what brings it down is the regular Telugu film village story. We'd still recommend watching this one - just ignore the routine stuff.
Share. Save. Connect.
Tweet
KANCHE SNAPSHOT 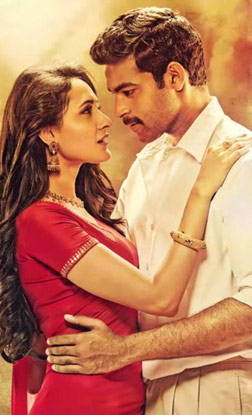 See Kanche full details
TOP COMMENT
Jwaalakaumudi on 26th Oct 2015, 11:19am | Permalink
I meant to say "forgettable BruceLee", not memorable, whoosh!!
4
0
KANCHE USER REVIEWS
1 - 11 OF 11 COMMENTS
POSITIVE  |  NEGATIVE |  NEWEST  |  OLDEST  |  MOST HELPFUL  |  LEAST HELPFUL
USER RATING
8.5
2 USERS
Performances
Script
Music/Soundtrack
Visuals
NA
NA
NA
NA
Can watch again - NA
Good for kids - NA
Good for dates - NA
Wait to rent it - NA
Saradhi on 6th Nov 2015, 4:36pm | Permalink
Kanche is one of the excellent movies in this era. However there is a great direction fault in the movie. That is Srinivas Avasarala always chants Srirangam Srinivasa Rao's poetry from the book Mahaprasthanam. Although Sri Sri started writing this poetry in the year 1930 and continued till 1940, the book was published the year 1950 and people did not know much about this poetry till the book is published. The movie is back in 1939 and till that time people did not know about Sri Sri's poetry. You may check the internet and Sri Sri's life history for details. Director Krish would have taken care of this point. Besides that the movie is an awesome movie. Must watch.
Dear John on 28th Oct 2015, 9:22pm | Permalink
Kanche is a copy of Dear John....why are many commentators here ignoring that fact???
rahulsachinsourav123 on 29th Oct 2015, 6:29pm | Permalink
Check story lines of Dear John and Kanche again, there are only occasional similarities in the taking, that's it. Even if there are, that shouldn't be yardstick in evaluating or rating a movie....Instead we should give credit to that someone who dared exploring a new genre and delivered a decent movie
K V L RAMESH on 26th Oct 2015, 9:09pm | Permalink
Kanche movie: Tollywood has become an industry which is no longer associated with only commercial entertainers. Films like Baahubali, Rudrama Devi and now Kanche, have pushed the boundaries beyond everyone’s expectations. Krish should be truly appreciated for attempting a film which takes Telugu films to another level. A realistic back drop, gripping visuals and stunning performance by Varun Tej are major assets. Must watch film. Director Krish should be appreciated for a brave attempt and for narrating a love story with WWII backdrop. On whole, Kanche is brave film with good technical values.ఓవరాల్గా 'కంచె' తెలుగు సినిమా స్థాయిని మరో మెట్టు పైకి తీసుకెళ్లే సక్సెస్ఫుల్ సినిమా.
Jwaalakaumudi on 26th Oct 2015, 11:19am | Permalink
I meant to say "forgettable BruceLee", not memorable, whoosh!!
kumar on 26th Oct 2015, 10:13am | Permalink
ravi kandala is d worst and most inferior D-grade reviewer of fullhyd... wish deepa garimella comes back
Jwaalakaumudi on 26th Oct 2015, 10:01am | Permalink
Ravi
You really should think about your abilities as a reviewer when you start putting the memorable BruceLee to this one-of-a-kind movie Kanche. How do you decide that this story cannot be told in parts and in a non-linear fashion? Humour and other stuff is only part of the movie and not a necessity for entertainment.

Then you say music is a definite minus!! Incredibly bad judgment. The music was at a different level, both songs and background score. However, the classical touch was unnecessary in your opinion, and that to me is completely uncalled for. Do you expect us to all lose our classical heritage altogether in the popular media, or do you think public in general does not like this kind of music? You should stop underestimating the audience. Clearly you are way off mark and confused.

Finally, if Krish feels the need to preach, so be it. Isn't the movie medium a socially responsible medium? What is wrong with a little bit of message? If the great directors of the past thought like you did, we would never had had movies like balipeetam, saptapadi, sankarabharanam, meghasandesam etc.

Please try to be unbiased and understand the genre of the movie start before you spill your opinion. Otherwise, I would happily ignore it and stop visiting fullhyd for your reviews.
Raghu on 2nd Nov 2015, 9:03pm | Permalink
Jwaalakaumudi: I completely agree with you.
Ravi: I seriously question your abilities as a reviewer.
All other fullhyd lovers: Kanche is one of its kind, and just go watch it. The review is either totally biased or the reviewer watched the movie or wrote the review when he was in a real bad mood.
Portuguese Man-of-War on 26th Oct 2015, 11:46am | Permalink
I don't think Ravi Kandala wrote the Bruce Lee review...
Uday on 25th Oct 2015, 2:24pm | Permalink
Fullhyd reviews started to not make much sense since Deepa left. And Ravi, you think this movie should have been told in sequence? One of the beauties of the movie is how the holocaust and the caste battle provide context to each other. And the alternating narration is brilliantly employed to this cause. You sir, in my humble opinion, are wrong here. This one deserved an 8.
rahulsachinsourav123 on 25th Oct 2015, 12:37pm | Permalink
WOW....6 for Brucelee, 6 for evadu, 7 for GAV and 6 for Kanche...Seriously? Why this reviewer is so biased towards Ram Charan? If you are putting both Bruce lee and Kanche in same league then you need serious introspection, before you start losing all your credibility.

Kanche definitely needs lot more accolades, it is like breath of fresh air in the middle of so called commercial pot boilers (or shall I call them starry, sound polluted, dumb storied, extravagant movies). Krish needs pat in the back for attempting a movie intertwining 3 complex threads like love story, social message, battle background and yet coming up with impressive movie. Only possible with talent, sensibility and maturity levels of Krish. All other Telugu directors who keeps churning out senseless cinema in the name of entertainers with same story being told in different ways, with same locales, same noisy music, same actors, same thugs, same comedians, same jazzy colors, same 50 crores budgets (list is endless) to be forced into training sessions by Krish about some sensible movie making, story telling and character writing.

ADVERTISEMENT
This page was tagged for
Kanche telugu movie
Kanche reviews
release date
Varun Tej, Pragnya Jaiswal
theatres list
Follow @fullhyderabad
Follow fullhyd.com on
About Hyderabad
The Hyderabad Community
Improve fullhyd.com
More
Our Other Local Guides
Our other sites
© Copyright 1999-2009 LRR Technologies (Hyderabad), Pvt Ltd. All rights reserved. fullhyd, fullhyderabad, Welcome To The Neighbourhood are trademarks of LRR Technologies (Hyderabad) Pvt Ltd. The textual, graphic, audio and audiovisual material in this site is protected by copyright law. You may not copy, distribute, or use this material except as necessary for your personal, non-commercial use. Any trademarks are the properties of their respective owners. More on Hyderabad, India. Jobs in Hyderabad.