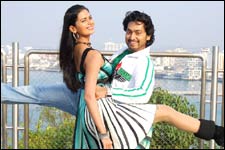 Deepa Garimella / fullhyd.com
EDITOR RATING
2.5
Performances
Script
Music/Soundtrack
Visuals
3.0
2.0
5.0
5.5
Suggestions
Can watch again
No
Good for kids
No
Good for dates
No
Wait to rent it
Yes
First up, this movie is indeed named that way because Life Style used the film to advertise, going by some not-so-subtle product placements featuring the mall's plastic carry bags. The only way to confirm the fact further is to sit through the end of the film, because the only other time they use the word is in the closing dialogue - "Great men are not born. They are made. It is their lifestyle."

Life Style, the film, is about a group of 5 college friends (3 males and 2 females), who constantly blubber about how they are inseparable and can't live without one another. Several examples of this buddy-ship abound. The first is that they decide that they will take up jobs only if all of them land up in the same company. Secondly, when they discover that one of them doesn't get through in their campus interviews, the others decline to accept their offers, until the 5th guy is also taken.

Thirdly, when one of them, Prabhu, keeps his forced wedding (the result of an annoyingly tyrant father) a secret from his friends, and they find this out, they insult him by screaming at him. They don't stop at this - they even insult the audiences by kicking his bicycle, stomping their feet around and mouthing balderdash about how valuable their friendship is. Apparently, they'd all decided to enjoy life together for some more time, and one of them couldn't have betrayed them like this. And lied to them like that.

When this same pained bloke, again secretly, chooses his location of job as Mumbai as against the popular choice of Vizag, you can guess what happens. They completely disown him. They take him back in their fold after a few days, of course, but you get the idea.

But then again, maybe you don't. Some years later, the ones who chose Vizag are all very happy. The reason? It's not just because the girls are much-married with 6-year old kids and 40-year old husbands, and the guys are happy in their jobs. It's because they all live together in a huge villa. They've even allotted a room for their out-of-touch absentee Mumbai friend, with his photo adorning the wall.

With so much happening, you're beginning to imagine your photo adorning the wall, and some chrysanthemums adorning it, too. But this isn't even the end of the first half. Anand, the hero of the story, falls in love with a girl, Anjali, on a train. He pursues her, with his platoon of friends backing him, but he doesn't know that she's the girl Prabhu married before he disappeared from the face of the earth. Anjali has been pining ever since, and is thrilled when she comes to know Anand is a friend of Prabhu.

She also comes to know about Anand's love for her, but doesn't take it very seriously, and adds his greeting card to a collection she's been maintaining over the years. She wants to show Prabhu cards from all the men who proposed to her, and ask him why he never liked her, when she finally does meet him. This is the point at which everyone's convinced that she's a real bharatiya nari, and decide to help her out.

After taking the first step of solidarity by inviting her over to their villa and dancing and singing, the gang discovers that the elusive Prabhu has been spotted in Bangkok. Anand and Anjali head there and search the whole of Bangkok, where they have very little luck. But in the end, they find out that Prabhu has married a Thai girl. In the very end, Anand and Anjali get together, if that's what you're wondering. But this is after Anjali has thrown her mangalasutram in some river in Bangkok.

This whole story is now a book, and is being narrated by Anand at Bapatla Engineering College (for which again this film is an advertisement), where they'd all studied, and where the book is now being released. The film closes with the dialogue we mentioned above, but only after Prabhu's father admits that it's not parents who shape a person, but friends.

With a script centering around campus emotions that refuse to grow up, Life Style is impossible to be taken seriously, but it's strangely de-stressing because of how basic everything is. The way they pull in 'friendship' as the answer and question to everything, the jokes, the frustrations - all reek of diary entries you wrote in the days when your thoughts were still evolving. Those days when you foolishly swore how everything in your life would remain the same till your last breath, unlike 'some others who change with time'.

Even the performances are extremely amateurish, with only the lead pair acting the part. The heroine looks glamourous, and could have a future in films.

The songs are allright, but for some reason, the makers thought this would make a cool musical. We are, thus, bombarded with a song every ten minutes or so, and it's just not funny. The visuals, however, are not very painful.

Life Style is hardly a film, but it's not exactly a misery if you go with the right spirit, and a really, really blank mind.
Share. Save. Connect.
Tweet
LIFE STYLE SNAPSHOT

ADVERTISEMENT
This page was tagged for
lifestyle telugu movie story
+life style quites in Telugu
Life Style telugu movie
Life Style reviews
release date
Follow @fullhyderabad
Follow fullhyd.com on
About Hyderabad
The Hyderabad Community
Improve fullhyd.com
More
Our Other Local Guides
Our other sites
© Copyright 1999-2009 LRR Technologies (Hyderabad), Pvt Ltd. All rights reserved. fullhyd, fullhyderabad, Welcome To The Neighbourhood are trademarks of LRR Technologies (Hyderabad) Pvt Ltd. The textual, graphic, audio and audiovisual material in this site is protected by copyright law. You may not copy, distribute, or use this material except as necessary for your personal, non-commercial use. Any trademarks are the properties of their respective owners. More on Hyderabad, India. Jobs in Hyderabad.