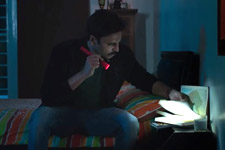 Anil Bandhakavi / fullhyd.com
EDITOR RATING
6.0
Performances
Script
Music/Soundtrack
Visuals
6.0
4.0
6.0
8.0
Suggestions
Can watch again
No
Good for kids
No
Good for dates
Yes
Wait to rent it
Yes
Kapatadhaari is a modern-day crime thriller in which director Pradeep Krishnamoorthy presents the story in an alternative fashion that is captivating. The pace is steady, but the various filmmaking tools employed are what make this film stand out.

Gautam (Sumanth) is a traffic police inspector who is keen on entering the investigation department. He dreams of waking up one day and donning a khaki shirt instead of the white shirt worn by traffic policemen. One day, while on his rounds, he notices some commotion in a ditch at a nearby construction site. In the ditch, he sees a few police officers inspecting skeletal remains that were unearthed by the workers. When he approaches the officers, they shoo him away admonishing him to stick to his duties as a traffic policeman. However the remains pique his interest as he's convinced that the subjects were murdered, and begins investigating things on his own.

GK (V Jayaprakash), the owner of an underground publication, also takes great interest in the same case. He believes that the case can give his publication the boost it needs to enter the mainstream. Gautam and GK run into each other one night when they simultaneously show up to inspect the site. Although they initially don't gel very well, they begin to cooperate as some clues unfold. It also becomes clear soon that GK's interest in this case has more to do than just the potential benefits for his publication. And when the trace leads to a murder that happened in Warangal decades back, things get quite murky.

Kapatadhaari succeeds in maintaining a grip of anticipation over you. You empathize with Gautam who's on a passionate one-man mission to crack his first case and make his entry into the anti-crime unit, and in the process get invested in the labyrinth of details that could reveal the culprit at any instance.

The visuals are compelling, making you feel like you're in the scene, especially in moments when Gautam is on the prowl for clues. An eerie background score similar to that used in horror films complements the visuals, keeping you on the edge of your seat.

It is also interesting to see the way the investigation process is displayed. When Gautam gets access to old files from the 1970s, he is shown to gather the details as if he is in real conversations with the subjects involved in the case from that era. The clues are thus revealed directly to the viewer from the subjects themselves, instead of being conveyed through Gautam's thoughts or any other standard method. A colour grade is maintained in these scenes to show that they are from an older time in the story. Little artistic tools and techniques like this give Kapatadhaari an alternative feel that's worth experiencing.

From a story-writing standpoint, you do feel like they push things too far in the second half with the links between the different clues, giving you too much to keep track of. This seems to happen often when writers are compelled to hide the climactic revelation from the viewer. A technique, mastered only by the very best, is to maintain simplicity in the details and not over-complicate the plot, and yet keep the viewer unaware of the resolution. It's also a little disappointing when so much is covered up just to reveal something that's not very shocking.

In the end, Kapatadhaari feels quite experimental, but they get it right. By no means is this effort devoid of flaws, but some of the cinematographic and screenplay decisions are refreshing, and make forays that conventional film might do without at this point. When it comes to trying new things, this movie succeeds in opening up the imagination of the lay moviegoer.
Share. Save. Connect.
Tweet
KAPATADHAARI SNAPSHOT 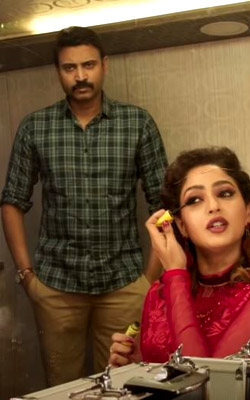 ADVERTISEMENT
This page was tagged for
Kapatadhaari telugu movie
Kapatadhaari reviews
release date
Sumanth, Nandhita Swetha
theatres list
Follow @fullhyderabad
Follow fullhyd.com on
About Hyderabad
The Hyderabad Community
Improve fullhyd.com
More
Our Other Local Guides
Our other sites
© Copyright 1999-2009 LRR Technologies (Hyderabad), Pvt Ltd. All rights reserved. fullhyd, fullhyderabad, Welcome To The Neighbourhood are trademarks of LRR Technologies (Hyderabad) Pvt Ltd. The textual, graphic, audio and audiovisual material in this site is protected by copyright law. You may not copy, distribute, or use this material except as necessary for your personal, non-commercial use. Any trademarks are the properties of their respective owners. More on Hyderabad, India. Jobs in Hyderabad.