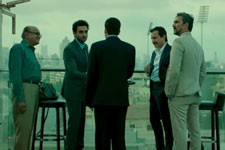 Sonali Dabade / fullhyd.com
EDITOR RATING
7.0
Performances
Script
Music/Soundtrack
Visuals
8.0
6.5
7.0
7.0
Suggestions
Can watch again
No
Good for kids
No
Good for dates
Yes
Wait to rent it
Yes
Bollywood rarely shies away from taking inspiration from Hollywood and trying to Indianise those stories. Keeping in line with this boldness comes Baazaar, the Indian version of the 1987 Hollywood movie Wall Street, the original that starred Michael Douglas and Charlie Sheen. Directed by Gauravv K Chawla, Baazaar is unlike some previously cheap knock-offs and has its merits, but like almost every Bollywood movie, also has some pitfalls.

Baazaar stars Rohan Mehra, son of veteran actor late Vinod Mehra, as Rizwan Ahmed, an up-and-coming stock broker from Allahabad. Rizwan sees big city dreams and hopes to move to Mumbai to work with his idol Shakun Kothari (Saif Ali Khan), the biggest businessman on Dalal Street and a staunch family man. Despite reluctance from his father, he moves to Mumbai with encouragement from his sister, to follow his dreams and make it big.

With the help of his colleague Priya (Radhika Apte), who he also falls in love with, Rizwan takes baby steps into the world of trading. Luck, happenstance, and some clever thinking finally make Rizwan's path cross with that of Shakun, who immediately sees potential in his talents and takes him under his wing.

This sees a rise in Rizwan's fortunes, but little does he realize what he's getting himself into. Shakun's friendship comes with a price, and Rizwan, in his quest for success, gets involved in the criminal world of insider trading and shady politicians. What follows is a tale of betrayal and secrets and how both the protagonists react to these circumstances.

The main plot of the film, that of a young and hopeful stock broker who gets involved in the shady world of a business tycoon, is essentially the log line of its Hollywood original. But there is enough of the standard Indian masala added to the script and screenplay to distinguish between the two versions. The ever-fluctuating world of the stock market is competently captured in the movie, with the rush of numbers and the chaos of a broker's office giving you a high you didn't think was possible.

However, one of its drawbacks is that Baazaar relies too much on narration and exposition. Having to explain every simple plot point feels that either the makers do not believe in the intelligence of the audience or they need to fill in the space since they do not have much by way of a plot. You can guess which one it is - we trust your intelligence.

Plus, the script is full of hammy dialogue, apt for a masala thriller. This includes a 15-second advert for PayTM that pulls you out of the movie and has you questioning the necessity of such blatant on-the-nose product placement and wondering about the lost art of subtlety. In spite of all these drawbacks, the movie works for the most part. Director Gauravv K Chawla handles the material given to him with slick precision, and the actors, upon whom the entire film rests, pick up the rest of the mantle and enhance your viewing experience to the point of even being awed sometimes.

Saif Ali Khan plays the crooked businessman with just the right amount of menace without ever being overly dramatic or cartoonish. His negative role-playing seems to be on point, for he seems to flourish when he is given such roles. Radhika Apte as Rizwan's encouraging colleague/girlfriend is reliable as always whenever she is on screen. It is as if Apte has multiple clones running around doing her job with equal panache, given the volume of work she's taking up with ease. Chitrangada Singh as Shakun's wife has a comparatively smaller role, but she elevates her character with grace and charm.

The star of the show is easily newcomer Rohan Mehra. He goes toe-to-toe with the accomplished actors and comes out looking like the next big thing. Thrown into an unfamiliar world and required to stand up on his own when everything is going against him, he plays Rizwan Ahmed with equal parts vulnerability and confidence. His performance as a small town guy with big city dreams is not groundbreaking, but it does hold out promise for his future.

The songs are pretty catchy for the most part but there are a tad too many. Some even distract you from the plot. The background score, however, is intense, and blends in well with the mood of the movie. It keeps you entranced when the plot loosens a little. The cinematography isn't spectacular but is quite competent for a big-budget Bollywood venture in these days.

In conclusion, Baazaar is a perfectly passable Bollywood movie, though it might not be evergreen like the film it is inspired by. "Greed is good," said Gordon Gekko in Wall Street. This inspired knock-off aspiring to be on par is good enough - almost.
Share. Save. Connect.
Tweet
BAAZAAR SNAPSHOT 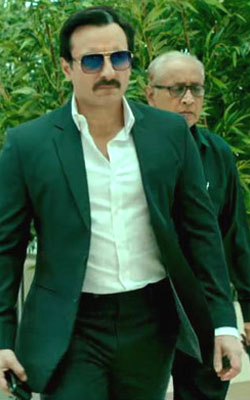 ADVERTISEMENT
This page was tagged for
Baazaar hindi movie
Baazaar reviews
release date
Saif Ali Khan, Rohan Mehra
theatres list
Follow @fullhyderabad
Follow fullhyd.com on
About Hyderabad
The Hyderabad Community
Improve fullhyd.com
More
Our Other Local Guides
Our other sites
© Copyright 1999-2009 LRR Technologies (Hyderabad), Pvt Ltd. All rights reserved. fullhyd, fullhyderabad, Welcome To The Neighbourhood are trademarks of LRR Technologies (Hyderabad) Pvt Ltd. The textual, graphic, audio and audiovisual material in this site is protected by copyright law. You may not copy, distribute, or use this material except as necessary for your personal, non-commercial use. Any trademarks are the properties of their respective owners. More on Hyderabad, India. Jobs in Hyderabad.