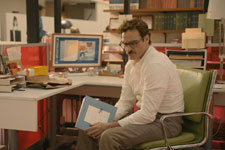 Kritika Deval / fullhyd.com
EDITOR RATING
7.5
Performances
Script
Music/Soundtrack
Visuals
9.0
6.5
7.0
9.0
Suggestions
Can watch again
Yes
Good for kids
No
Good for dates
Yes
Wait to rent it
No
It must be a testimony to how out of it our hero, Theodore Twombly (Joaquin Phoenix), was that he was not alarmed out of his mind that the growing sentience that lived in his computer, that was in charge of every number that made him him, had feelings. Call us paranoid, but we fail to see how the makers failed to see that the logical conclusion to this film is that humanity is at an end.

We see you are baffled and we shall un-baffle you. Twombly, despite his rather Victorian name, lives in a world that seems to be not too far into the future. There are many things you will find familiar in this world, except that it is full to the brim with hipster douchebags who are constantly talking to their little headsets. It is a horrific future indeed, for if we came across a specimen of this breed in today's, time he/she would be laughed out of their douchiness.

Apart from the fact that he lives in a society where seemingly laughing and talking to yourself is socially acceptable behavior, Twombly has also recently gone through a divorce. His job of writing love letters for other people does not help matters, nor the fact that the only other person he is close to, Amy (Amy Adams), seems as emotionally unstable as him.

That is when he finds Her, Her being a game-changing operating system which possesses the capability to acknowledge its existence, give itself an identity, learn, grow and evolve. The moment Twombly activates it, with the specification that the OS take on a female voice and persona, the husky, girlish, breathy voice of Scarlett Johansson informs him that she is Samantha, because that is who she wishes to be.

She enters his lonely life with vengeance bolstered by determination and efficiency. She organizes everything, from his email to his love life. She plays video games with him. She flirts. She makes him laugh. She is everything that a man might want in a woman. Except that she does not have a body.

As the two try to find a way around this complication, you delve into a broken world that does not know it is broken. The fact that we are not already living in this chrome-ridden society where individuals live in portable towers of technology probably has more to do with the fact that SIRI still refuses to recognize your voice properly, than with any susceptibility on your part or lack thereof.

Spike Jonze gives you the story in a startlingly honest way, excellent humor only adding to your sense that whatever is happening on screen is just plain wrong. Then, too, there is Joaquin Phoenix who has the role of self-effacing, depressed, confused character of Twombly down to a T. The trouble is, though, Twombly is not very likeable. Watching Twombly fall for Samantha is like watching that friend of yours - the not too terribly bright one who always falls for the wrong person - get into yet another mess. You find yourself groaning that this will not end well, but you don't care all that much, because there is only so much you can do.

Amy Adams is adequate as Twombly's neurotic neighbor, as are Rooney Mara, Bill Hader, Kristen Wiig and the rest in their respective cameos. Scarlett Johansson imbues her voice with so much more flexibility and emotion when she doesn't have to bring her face into the equation, we almost don't care that her luscious body never adorns the screen.

It is probably yet another demonstration of a fractured society that every character in the film sets your teeth on edge, not because they are patently bad people, but because the film is a terrifyingly accurate representation of how quickly human interaction, that fabric that holds the current chapter of civilization, can give dissolve. It took us millennia to turn into the social creatures that put us on top of the food chain. But the growing lack of interaction can overturn all of that struggling and striving in a matter of mere centuries.

The amount of insight required to portray people who are like us and yet not like us is immense, and Jonze does not let us down, nor does he let up on us simply because we might get uncomfortable.

The soundtrack is hazy, like a dream, as is the cinematography. The feeling that none of it is quite real is always in the forefront, except when Twombly is not in the vicinity of Samantha. That is when the picture becomes sharper, colder, more defined. We don't know when or where this is, but we can presume that the place is New York and the time is only a century or two from now. They still have the subway system, they still work in cubicles, they still have restaurants and universities and spaces that we can recognize.

All of this is obvious to anybody who can look beyond the rom-com aspect of the film. The fact that we have to spend more time on Samantha and Theodore's sappy love story, rather than on the terrifying implications of the fascinating world around them, is rather disappointing.

But, as long as you are not an avid reader of Asimov and other hard sci-fi, you will find it easy enough to ignore that these OSes don't seem to have any rules governing their behavior, or any restrictions as to information they can access, or that they are capable of evolving at immense speeds, or that they seem to have ganged up on humanity. 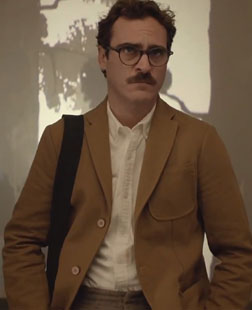 ADVERTISEMENT
This page was tagged for
Her english movie
Her reviews
release date
Joaquin Phoenix, Lynn Adrianna
theatres list
Follow @fullhyderabad
Follow fullhyd.com on
About Hyderabad
The Hyderabad Community
Improve fullhyd.com
More
Our Other Local Guides
Our other sites
© Copyright 1999-2009 LRR Technologies (Hyderabad), Pvt Ltd. All rights reserved. fullhyd, fullhyderabad, Welcome To The Neighbourhood are trademarks of LRR Technologies (Hyderabad) Pvt Ltd. The textual, graphic, audio and audiovisual material in this site is protected by copyright law. You may not copy, distribute, or use this material except as necessary for your personal, non-commercial use. Any trademarks are the properties of their respective owners. More on Hyderabad, India. Jobs in Hyderabad.