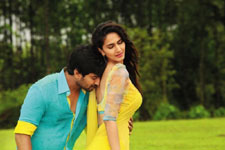 Kritika Deval / fullhyd.com
EDITOR RATING
7.0
Performances
Script
Music/Soundtrack
Visuals
8.0
6.5
5.5
7.0
Suggestions
Can watch again
No
Good for kids
No
Good for dates
Yes
Wait to rent it
No
You've seen this one before. Here, and, God bless your poor soul, here. Unless you've been living under a rock, you know what it's all about. Still, for those who have a penchant for living as the Flintsones do, here's the plot.

Shruthi Subramanyam (Vaani Kapoor) is a dedicated young woman with a Dream. Sathya (Nani) is a charming scapegrace whose only aim is to stay in the City and away from his father's farms. They meet under circumstances suitable to the film's theme, and unsuitable to their making a good impression on each other. Nevertheless, Sathya is charmed by Shruthi, and seeks her out with the intention of wooing her socks off, only to have his brain blown out by the tedium of having the girl detail her life's Plan, involving a career as a wedding planner with Getti Melam as her company's name, to him.

However, circumstances will not leave the two alone, and, aided by Sathya's obstinate father, and a deceitful but extremely popular wedding planner Chandra (Simran), they conspire to throw the two together and before you know it, Getti Melam is the Next Big Thing.

But then, despite Shruthi's insistence that "finance" and "romance" mix about as well as water and oil, a drunken night of lovemaking leaves the two unsure of how to proceed, and eventually the two headstrong hotheads manage to make a further muck of things and proceed to split up, both firm in their intentions of running the other out of business.

Now, as the two open up their own shops, and discover that individually they are about as useful as a hand without an opposing thumb, it is upto circumstances, aided again by people close to our hero and heroine, to knock some sense into their heads and show how getti their own melam is.

While the plot moves pretty much scene to scene the same way as that of Band Baaja Baaraat, Nani and Vaani (lol) make the film wholly their own. Unlike Ranveer Singh's testosterone-fuelled strutting, Nani tones the character down with his equally confident but nevertheless self-effacing charm all his own, the very same one which had us crying our hearts out in sympathy for a miserable fly. Vaani Kapoor is quite a find, and, IOHO, a much more graceful and likeable version of the sharp-as-a-pinhead Shruthi the wedding planner.

Perhaps we are biased, but separating this story from the overt Punjabi boisterousness of the original has done wonders for the film. Our south-Indian Sathya and Shruthi seem more worthy of our sympathy than their rather irritating north-Indian counterparts. What we needn't, but albeit feel we should, is this movie should never in a million years be compared to Nandini Reddy's flagrant disregard of intellectual ownership.

The story might have been put out there once too many, but the excess is on Reddy's part and not this version. The dialogue, with its pleasing mix of slapstick and spontaneous, aided by Nani and Vaani's (there it is again) engaging chemistry, neatly takes care of any feelings of deja vu that might assail you.

The plot moves quickly, and you don't have time to get tired of the two crazy kids and the hammers they constantly have poised atop their own feet. The dialogue is spiffy enough to elicit a giggle a minute, the supporting cast being as perfectly suited to their characters and each other as our lead pair. The famous "kiss", though, gets done in a hurry, and is awkward while it lasts.

We must mention the absolutely adorable outfits that adorn Vaani Kapoor, all of which fight a constant battle for attention with her own vivacity. Any girl with a working set of eyes cannot help but leave the movie hall with a head full of ideas to badger her tailor with.

While the music, although earwormy enough, is rather lacksluster, the cinematography is as spectacularly inspired as in the original. Every movement of the camera seems directed at making the best of all the colors available. Weddings are a grand thing, and the way you see weddings portrayed in this film will make even those against the institution want to at least go through the ceremony.

Bottomline: You know you've seen Band Baaja Baaraat every time it's been on TV. Don't let the fact of it keep you away from a delightful rendition. As overblown as the analogy might be, King Lear is no less majestic for the retelling.
Share. Save. Connect.
Tweet
AAHA KALYANAM SNAPSHOT

ADVERTISEMENT
This page was tagged for
aaha kalyanam full telugu movie
Aaha Kalyanam telugu movie
Aaha Kalyanam reviews
release date
Nani, Vaani Kapoor
Follow @fullhyderabad
Follow fullhyd.com on
About Hyderabad
The Hyderabad Community
Improve fullhyd.com
More
Our Other Local Guides
Our other sites
© Copyright 1999-2009 LRR Technologies (Hyderabad), Pvt Ltd. All rights reserved. fullhyd, fullhyderabad, Welcome To The Neighbourhood are trademarks of LRR Technologies (Hyderabad) Pvt Ltd. The textual, graphic, audio and audiovisual material in this site is protected by copyright law. You may not copy, distribute, or use this material except as necessary for your personal, non-commercial use. Any trademarks are the properties of their respective owners. More on Hyderabad, India. Jobs in Hyderabad.