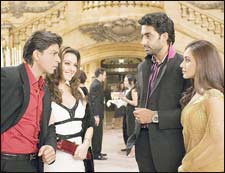 Najaf Ishrati / fullhyd.com
EDITOR RATING
7.5
Performances
Script
Music/Soundtrack
Visuals
NA
NA
NA
NA
Suggestions
Can watch again
NA
Good for kids
NA
Good for dates
NA
Wait for OTT
NA
People of the city can finally stop crossing off painstaking days on the calendar. Instead, they could try their hand at waiting in long queues. And this, for no small reason. All Shahrukh fans please stand up. All Amitabh fans, kindly also stand up. All Abhishek fans... you get the point. Or rather, you get a whole city of upstanding fans.

The hyperhyped KANK has hit the screens to some wild raucous cheering on the one hand, and possibly another cinematic landmark on the other. But that's just possibly.

What we have here, is some old Tequila in a long, long, bottle-necked bottle. By the time it comes out, the party is almost over. However, we'd admit... While the concepts that have been thrown in have definitely been seen before, they have certainly never been packaged in this way.

Charming football star Dev Saran (Shahrukh Khan) is already married when he meets Maya (Rani Mukherjee) for the first time, all decked up in her wedding regalia. Maya ho-hums about her marriage to Rishi Talwar (Abhishek Bachchan). Dev's suggestion: Try and be happy with her husband, or wait for a love that may never happen. Rani quips: What if she finds love after marriage?

This sets the base, the tone, the flavor, (the length,) and, if you will permit us, even the scent of the movie. Or, the starting ammo with which Karan Johar launches his latest melodrama from New York.

Kabhi Alvida Naa Kehna goes much further beyond the barriers set by previous movies like Murder or Silsila. The difference is that there the affair stays the affair, and the wife stays the wife. In any case, in the older movie, the wife wasn't allowed to know about big words starting with a D.

KANK puts in your way, an extra-marital love which is out of this world, lust which knows no limits to passion, guilt which almost dredges you into the ground, jealousy which knows no reason, and enough ethics to drive you insane.

All these emotions and events come your way with a very surprising and refreshing free-style approach: Nothing really matters to anyone in the movie, except you. But then, you aren't in the movie, so if they aren't bothered, why are you? Dev's atrocious fatherly behavior rarely gets a reprimand from mother or wife, let alone get noticed by child agencies. A full-blown declaration of adultery in front of all and sundry gets passed off as a sense of humor. Divorce is a quick flash away.

Anyway, getting back to the screen, Dev turns into a frustrated short-tempered coach after an accident leaves him with a limp for life. His wife Ria (Preity) is the busy editor of a fashion magazine, and has a fewer number of hours on her watch than her husband. As far as Maya goes, it is clear that her marriage was a compromise in spite of her loving, amorous Abhishek.

Dev and Maya meet amidst some highly contrived circumstances, and help each other reclaim their marital bliss(?). What happens then is something to visit the cinemas for.

But boy, does Shahrukh Khan possess star power. He plays the Devil's advocate, the grumpy husband, the frustrated sportsman and the ardent lover with such consummate ease, that you could almost forget that he is courting two women in the movie. However, there's the feeling that it's not enough. With stars scattered around like this, you can never get enough of any.

Sam (Amitabh Bacchan), the flamboyant "Ahh, the bed broke this morning" widower, refreshes in his role. If this man's got yet some more up his sleeve after all these years, I wouldn't be the least bit surprised.

Preity Zinta does not have too many words, but plays the part of the modern woman in modern love. All she is allowed is one resounding thappad across Dev's face. Kiron Kher does well for herself, especially while receiving compliments from the frisky "sexy" Sam about the growing size of her... well, of Chandigarh. Rani Mukherjee plays the loveless-wife-yet-passionate-lover role with consummate skill. Abhishek Bachchan performs fabulously as the husband, blinded to all faults. His passion and maturity come across very easily.

But the movie's real mark is in the way it ends. In Sippy's Sholay, Amitabh dies because society won't accept a widow remarriage. Here, Karan Johar gets KANK to move the heavens and the earth, and, of course, the starcast, to be among the first to have brought off the new concept of finding love after marriage.

And perhaps, you may also just see that Tequila slowly squirming its way out of the mouth of the bottle as you move out of the halls.
Share. Save. Connect.
Tweet
KABHI ALVIDA NAA KEHNA SNAPSHOT

i feel the last reason is the most justified. it looks like Johar got carried away with the theme and forgot to edit it. atleast 30-40 minutes could have been trimmed without making any difference. its this aspect that takes away the impact of the truely different storyline and leaves the audience mentally drained and tired.

if anyone has to watch it, watch it for Abhishek and Amithab, in that order. they rock!

RATING
6
Manjukiran Shetty on 25th Aug 2006, 3:19pm | Permalink
I have noticed that the "The Hyderabadi verdict!" always wins over the reviewers' rating.

I dont understand why this reviewer feels this is 3.5 star movie

RATING
4
Khader on 23rd Aug 2006, 9:38am | Permalink
i request prasad multiplex to giv my money bak.
RATING
2
Pawan K on 21st Aug 2006, 10:20pm | Permalink
Karn johar must see a Psychiatrist
RATING
2
Sami Reddy on 21st Aug 2006, 1:55am | Permalink
Worst movie I hv ever seen..., Guys plz dont waste time...n money on this movie since u can do somethng much bettr ..(like watching some telugu serial on TV or trying to go for long drives on city roads)..trust me..this is worst than that
RATING
2
Ask Me on 20th Aug 2006, 9:23am | Permalink
Worst movie of the year
RATING
2
Prakash on 19th Aug 2006, 10:47pm | Permalink
Well, I haven't seen the movie. Since most readers didn't like the movie, the movie must have something 'unique', because it's a fundamental law of the universe that majority of the people are fools. At the same time, Karan Johar is such a first-rate stupid that I won't be surprised if he had made a hash of it. I feel, for kind of the crap he shoots most of the time, such a star casting is uncalled for or is it that he needs it more than anyoneelse to push that rubbish. I don't know....
RATING
4
Ramesh on 19th Aug 2006, 9:41pm | Permalink
kya film yaar worst plot worst acting waorst direction
RATING
2
Rangss $$$ on 19th Aug 2006, 4:15am | Permalink
Major Hathouda! Interval mein hi Alvida keh diya maine!!!
RATING
2
Sekhar Babu on 16th Aug 2006, 10:20pm | Permalink
Kshama karo hame oo radhekrishna, did a grave mistake by watching this useless on krishnaastami.hare krishna hare krishna
RATING
2
Kris Ray on 14th Aug 2006, 9:57pm | Permalink
This is another review, where the FullHyd reviewer got the brickbats from almost all the readers. Almost 95% of the comments give one star rating to the movie, where as the reviewer feels this is a really good movie. Guys and Gals! this movie sucks... seriously. It is very very very difficult and in fact impossible to sit through this 3 hours of non-sense. The movie theme, length, story, acting, narration.. everything simply is yuk.. like the behaviour and body language of Karan Johar
RATING
2
Abdul S on 13th Aug 2006, 2:51pm | Permalink
Ever tried stretching your arms straight up for 3 hours at a stretch? Ever tried standing on one leg for more than 3 hours? Ever tried sitting in a lotus position for more than 3 hours? You did!!! HA
RATING
2
Srini on 13th Aug 2006, 2:15pm | Permalink
Stupid theme with no sense in setting the flow of movie. Pathectic movie...if u are going please call you doctor and go
RATING
2
Abhi on 13th Aug 2006, 1:39pm | Permalink
If any one says that this movie is god or even average .i would say see your pryschiortist as eal as posible..the worst film..i have had ever seen...i think probably something is worng with karan johar.the movie really sucks.poor movie a single star would be more thna enough.
RATING
2
1 - 15 OF 22 COMMENTS  |  NEXT  |  LAST
LEAVE A COMMENT
fullhyd.com has 700,000+ monthly visits. Tell Hyderabad what you feel about Kabhi Alvida Naa Kehna!
MORE MOVIES
Latest Reviews
Sammathame
Jugjugg Jeeyo
Godse
Nikamma
Virata Parvam
more
Ante Sundaraniki
Janhit Mein Jaari
Jurassic World: Dominion
Jurassic World: Dominion (Te...
Jurassic World: Dominion (Hi...
Vikram
MAJOR
MAJOR (Hindi)
F3: Fun and Frustration
Anek
Contemporary Reviews
Veerabhadra
Adbhutam
Adavi Chukka
Aayana + Aame = 9
Munich
more
Rocky
Waqt
Dheerudu
The Killer
Click (English)
Mass - Dammunte Kasko
Shaadi Karke Phas Gaya Yaar
Sandwich
Anthony Kaun Hai?
Random Reviews
Grahan
Premaku Swaagatam
Chori Chori Chupke Chupke
The Passion Of The Christ
Shakalaka Boom Boom
more
Sorry Bhai
Rambabu Gadi Pellam
Yogi Bear
Naa Ishtam
The Host
300: Rise Of An Empire 3D (T...
Malli Malli Idi Rani Roju
Star Trek Beyond (3D)
Julie 2
Toy Story 4
SEARCH MOVIES
Dissatisfied with the results? Report a problem or error, or add a listing.
ADVERTISEMENT
SHOUTBOX!
{{todo.name}}
{{todo.date}}
[
ip{{todo.ip}}
]
{{ todo.summary }}... expand »
{{ todo.text }} « collapse
First  |  Prev  |   1   2  3  {{current_page-1}}  {{current_page}}  {{current_page+1}}  {{last_page-2}}  {{last_page-1}}  {{last_page}}   |  Next  |  Last
{{todos[0].name}}

ADVERTISEMENT
This page was tagged for
hindi old dvd print movie kabhi alvida na kahena
full Bollywood movie kabhi alvida naa kehna
Kabhi Alvida Naa Kehna hindi movie
Kabhi Alvida Naa Kehna reviews
release date
Follow @fullhyderabad
Follow fullhyd.com on
About Hyderabad
The Hyderabad Community
Improve fullhyd.com
More
Our Other Local Guides
Our other sites
© Copyright 1999-2009 LRR Technologies (Hyderabad), Pvt Ltd. All rights reserved. fullhyd, fullhyderabad, Welcome To The Neighbourhood are trademarks of LRR Technologies (Hyderabad) Pvt Ltd. The textual, graphic, audio and audiovisual material in this site is protected by copyright law. You may not copy, distribute, or use this material except as necessary for your personal, non-commercial use. Any trademarks are the properties of their respective owners. More on Hyderabad, India. Jobs in Hyderabad.