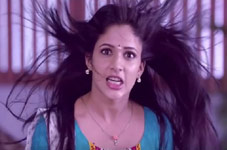 Josh / fullhyd.com
EDITOR RATING
5.0
Performances
Script
Music/Soundtrack
Visuals
7.0
5.0
6.0
6.0
Suggestions
Can watch again
No
Good for kids
No
Good for dates
Yes
Wait for OTT
Yes
Imagine an island people who are entirely dependent on passing merchant ships for their supplies. They'd sit at the coast staring at the horizon waiting for a ship which no one knows will turn up when. This situation isn't unlike that of the discerning Telugu viewer waiting for a good film to release. You sit and wait for long periods with no ships sighted, and celebrate the few times when a vessel does turn up. The most frustrating times, though, are when the ship shows up - with stale food.

Lakshmidevi (Lavanya Tripathi) is a dedicated bank employee (yay - our heroine is a financially independent level-headed woman!). However, her colleague Naveen (Naveen Chandra) is very much open to financial misconduct. He gets himself and Lakshmidevi embroiled in a scheme involving unclaimed accounts in the bank, and the innocuous bank manager (Jayaprakash Reddy) appears to be completely unaware of what's transpiring in his bank.

Meanwhile, there's some guy digging a tunnel under multiple locations in Hyderabad.

A plot which has a working woman for its titular protagonist, interesting financial crime, mysterious diggers, and a touch of the supernatural, automatically qualifies for the "good film" tag in a market where we are used to watching the same thing over and over. However, all story and no execution makes LOL dull cinema.

The movie gets a very straightforward and menial execution. Director Jagadish Talasila isn't terrible, but he doesn't possess the rich imagination or the fluid story-telling capabilities of his mentor (S S Rajamouli). The film progresses rather mechanically, and while you can see when you're supposed to laugh and when you're supposed to feel excited, you just don't. When a comic thriller of under two hours' duration makes its viewers yawn, there's an issue.

Lavanya Tripathi is miscast. We have hitherto had only good things to say about her. She is pretty, has a certain (uncommon) dignity to her, and can act reasonably well. Nonetheless, Lakshmidevi's character needs some serious histrionics, and for the comedy to work, Tripathi's reserved performance isn't apt. The role needed someone who could be more unrestrained with physicality and expression. Naveen Chandra is likeable and does act, and seems to be doing his own bit of looking at the horizon for that one life-altering good role to turn up.

The music (by Keeravani) and the visuals (Eshwar Yellumahanti) have this quality of being good but not particularly memorable.

We'd tell you that the movie is good for kids if it weren't for that one item song with some of the strangest censoring we've come across till date. You'll find black squares concealing objectionable lady parts like ...thighs. At this moment, we can't decide what's worse - having a child watch a lot of skin or having them ask you why there are black squares on that skin.

The movie is elevated largely by the superb performance of JP. The man is as reliable as he is huge. It takes actors of his calibre (he sings, too) to keep that absurd climax watchable if not hilarious. Add to this mix some decent performances by Brahmaji and Ajay, and a rip-roaring cameo (you'll know who it is the moment you see the cast list), and you manage to have some decent fun.

It is these performances and the out-of-the-ordinary plot which bring some watchability to Lacchimdeviki O Lekkundi. And now we get back to waiting for the next ship.
Share. Save. Connect.
Tweet
LACHIMDEVIKI O LEKKUNDI SNAPSHOT 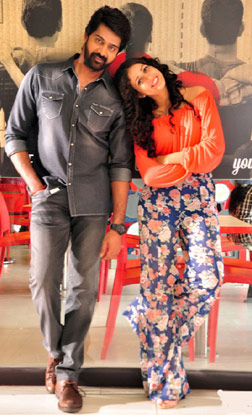 ADVERTISEMENT
This page was tagged for
Lachimdeviki O Lekkundi telugu movie
Lachimdeviki O Lekkundi reviews
release date
Lavanya Tripathi, Naveen Chandra
theatres list
Follow @fullhyderabad
Follow fullhyd.com on
About Hyderabad
The Hyderabad Community
Improve fullhyd.com
More
Our Other Local Guides
Our other sites
© Copyright 1999-2009 LRR Technologies (Hyderabad), Pvt Ltd. All rights reserved. fullhyd, fullhyderabad, Welcome To The Neighbourhood are trademarks of LRR Technologies (Hyderabad) Pvt Ltd. The textual, graphic, audio and audiovisual material in this site is protected by copyright law. You may not copy, distribute, or use this material except as necessary for your personal, non-commercial use. Any trademarks are the properties of their respective owners. More on Hyderabad, India. Jobs in Hyderabad.